Utah scientists propose an expansion for their cosmic ray observatory, to speed up studies of a mysterious source of ultrahigh-energy cosmic rays. 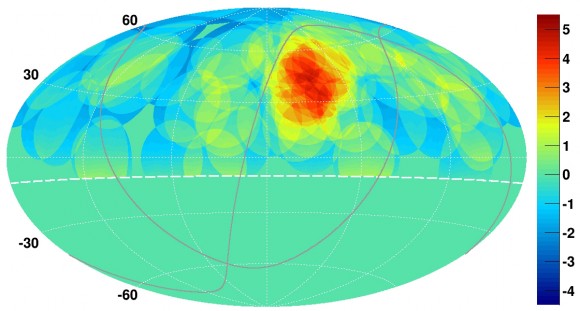 View larger. | This map of the northern sky shows the cosmic ray “hotspot” in bright red and yellow. The hotspot is located near the Big Dipper on the sky’s dome. Image via K. Kawata, University of Tokyo Institute for Cosmic Ray Research

A year ago, an international team of 125 scientists – including 32 from the University of Utah – announced the discovery of a cosmic ray hotspot, apparently the source of more incoming ultrahigh-energy cosmic rays than another other location in our sky. Today (June 15, 2015), University of Utah announced a planned $6.4 million expansion of its $25 million Telescope Array observatory with the goal of zeroing in on the hotspot and figuring out what it might be.

Japan has committed $4.6 million, and University of Utah scientists are seeking another $1.8 million, to nearly quadruple the size of the existing 300-square-mile (777-square-km) cosmic ray observatory in the desert west of Delta, Utah.

They say the expansion will let them take the next step in identifying what objects in space produce ultrahigh-energy cosmic rays.

Scientists discovered cosmic rays – which aren’t really rays – in 1912. They are subatomic particles whizzing through space, including bare protons and nuclei of atoms such as helium, oxygen, nitrogen, carbon and iron. Many cosmic rays carry relatively low energies and come from within our galaxy from exploding stars, other stars and the sun. 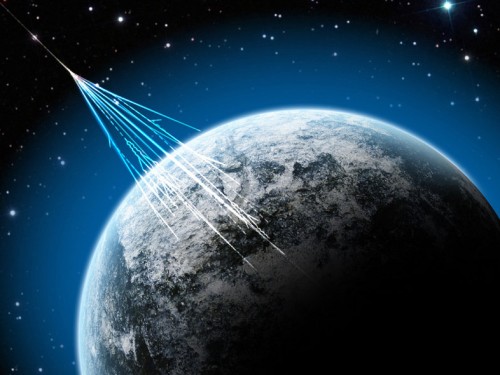 Pierre Sokolsky, a University of Utah distinguished professor of physics and astronomy and principal investigator on the Telescope Array’s current grant from the National Science Foundation, said:

The question has been staring us in the face for 40 years.

We know these particles exist, we know that they are coming from outside our galaxy and we really don’t have a clue as to how nature pumps that much energy into them.

In order to have a clue, we need to know where they are coming from. This hotspot is our first hint. We need to work with astronomers and find out what galaxies or black holes are in this hotspot.

During a five-year period, the Telescope Array detected 72 of the highest, ultrahigh-energy cosmic rays — those with energies above 57 billion billion electron volts.

Of the 72 superenergetic particles, 19 came from the direction of the hotspot – a 40-degree-diameter circle representing 6 percent of the northern sky and located a couple hand widths below the Big Dipper.

Only 4.5 ultrahigh-energy particles would have been expected from that area if cosmic rays came randomly from all over the sky.

Astrophysicists say odds that the hotspot is a statistical fluke and not real are 1.4 in 10,000. But they want a much higher level of confidence. Sokolsky said the hotspot’s existence …

… is at the statistical level where it could go either way. We won’t know if it’s real unless you want to stick around for 40 years.

The array now has 507 detectors spaced in a grid over 300 square miles of desert west of Delta. The expansion will see two lobes containing 400 more detectors added to the array’s footprint, so it will expand to almost 1,000 square miles. One lobe will extend north-northeast from the existing array; the other south-southeast. Sokolsky said the expansion of the array will speed up the detection of cosmic rays and make it possible to get the answers much faster.

We see this intriguing clustering of the highest-energy cosmic rays coming from one area of the sky. But the rate at which we detect them is very low. We get at most 20 events a year at the highest energies.

To get to a point where we can really study this with good sensitivity, we need to increase that rate by at least a factor of four. 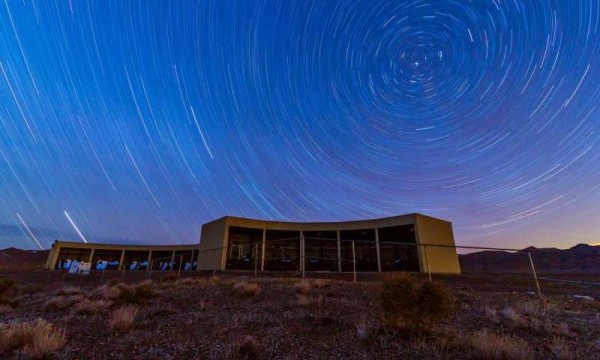 In this time-lapse photo, stars appear to rotate above one part of Utah’s Telescope Array, which researchers used for a period of five years to discover the cosmic ray hotspot. Now they want to expand this observatory, to focus in on the hotspot and figure out what it might be. Image via Ben Stokes, University of Utah 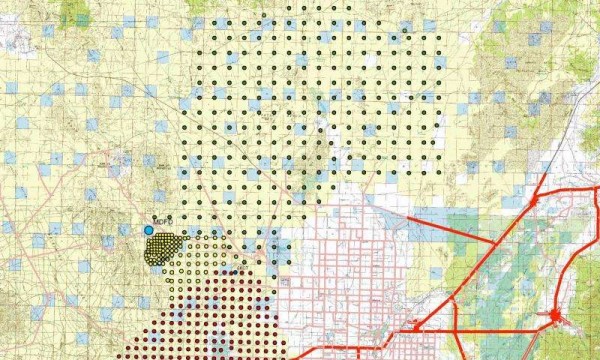 This map shows the existing layout and proposed expansion of the $25 million Telescope Array cosmic ray observatory near Delta, Utah. The town is in the middle in white. Roads and highways are pink and reddish lines. The array of red dots left of center are the observatory’s existing 507 scintillation detectors that measure “air showers” of particles that fall to Earth when an incoming cosmic ray hits an atmospheric gas molecule. The green dots above and below the eixsting array shows where another 400 scintillation detectors would be installed at past of a proposed $6.4 million expansion, which also would include installation of another 60, more tighly spaced detectors (yellow dots) just northeast of the existing array. Blue dots show the observatory’s existing three fluorescence detectors. Two more would be added (not shown) as part of the expansion. Federal land is shown in yellow and Utah state land in blue. Image via Robert Cady, University of Utah