Astronomers announced this week that – for the first time – they have observed a so-called ‘fast radio burst’ in real time. 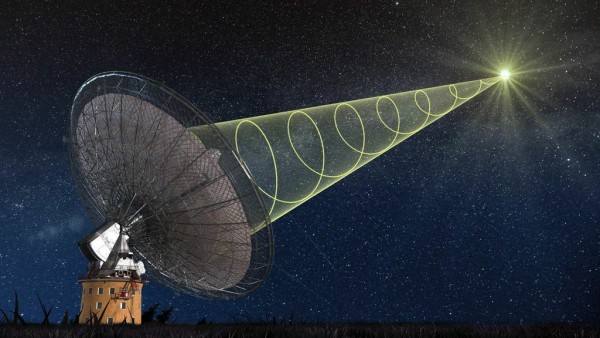 Cosmic radio bursts – what astronomers call fast radio bursts – are bright flashes of radio waves, lasting only a few milliseconds. The first one was seen retroactively in 2007, only 3 degrees from the direction in space to the Small Magellanic Cloud. Before now, no fast radio burst was observed in real time. Even now, the source of the bursts is unknown. This week, an international team of astronomers reports a breakthrough. They say that – for the first time – they have observed a fast radio burst as it happened. These astronomers published their work in the Monthly Notices of the Royal Astronomical Society.

Carnegie Observatories was one of the multiple organizations involved with the new study. Its acting director John Mulchaey called fast radio bursts:

… one of the biggest mysteries in the universe.

That’s because, although in the past few years astronomers have retroactively observed a total of seven fast radio bursts, their origin remains utterly unknown. These bursts were found after the fact, by astronomers who combed through data from the Parkes radio telescope in eastern Australia and the Arecibo telescope in Puerto Rico. More recently, a team of astronomers in Australia developed a technique to search for fast radio bursts. In the current study, a group of astronomers, led by Emily Petroff (Swinburne University of Technology), has succeeded in observing the first burst in real time with the Parkes telescope.

In order to observe the fast radio burst in real time, the team mobilized 12 telescopes around the world and in space. Each telescope followed up on the original burst observation at different wavelengths, ranging from infrared light, visible light, ultraviolet light and X-ray waves. The hope was that, in one wavelength or another, some source of the burst could be identified. This did not happen.

What did they learn then? The astronomers seem to agree that the characteristics of the event indicate that a source for the burst far beyond our galaxies boundaries. Even this has been controversial, with some astronomers claiming the bursts come from nearby stars. The astronomers involved with this study, though, say the burst originated up to 5.5 billion light-years from Earth. If that is indeed the case, then the sources of these bursts must be extremely powerful.

So now what? The team captured the radio wave burst while it was happening and immediately made follow-up observations at other wavelengths. They did not see anything that would indicate the burst’s source. But they were able to rule out some possibilities. Carnegie’s Mansi Kasliwal said:

Together, our observations allowed the team to rule out some of the previously proposed sources for the bursts, including nearby supernovae.

Daniele Malesani, astrophysicist at the University of Copenhagen, said:

We found out what it wasn’t. The burst could have hurled out as much energy in a few milliseconds as our sun does in an entire day. But the fact that we did not see light in other wavelengths eliminates a number of astronomical phenomena that are associated with violent events such as gamma-ray bursts from exploding stars and supernovae, which were otherwise candidates for the burst

And the burst left another clue. The Parkes detection system captured the polarization of the light. The orientation of the radio waves indicates that the burst likely originated near or passed through a magnetic field. Malesani said:

The theories are now that the radio wave burst might be linked to a very compact type of object — such as neutron stars or black holes and the bursts could be connected to collisions or ‘star quakes.’ Now we know more about what we should be looking for.

Bottom line: Astronomers announced this week that – for the first time – they have observed a fast radio burst in real time.