It’s not a stretch to say these astronomers fundamentally changed the way we think about our place in the universe. We can gain insights into how this profound shift unfolded by looking at their actual notes. 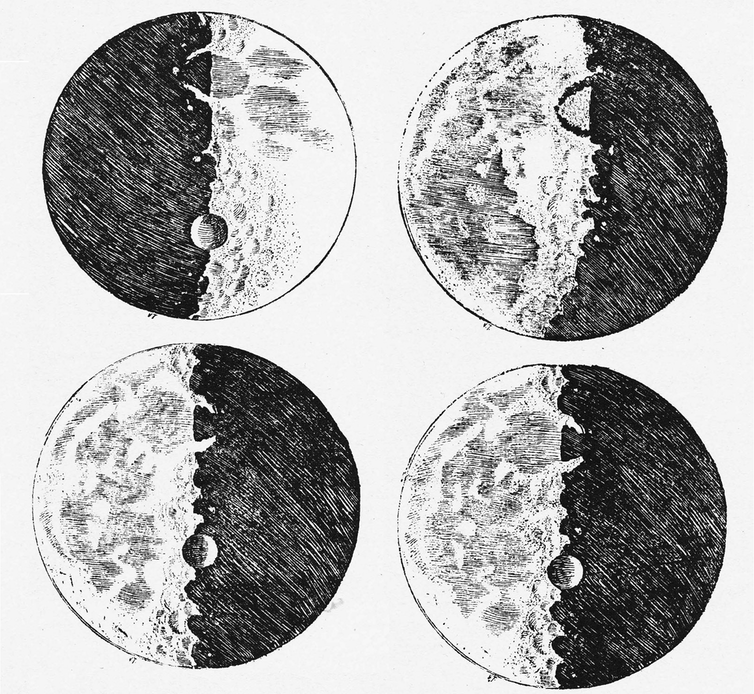 Galileo’s sketches of the moon, showing its phases. Image via Wikimedia.

It’s not a stretch to say the Copernican revolution fundamentally changed the way we think about our place in the universe. In antiquity people believed the Earth was the center of the solar system and the universe, whereas now we know we are on just one of many planets orbiting the sun.

But this shift in view didn’t happen overnight. Rather, it took almost a century of new theory and careful observations, often using simple mathematics and rudimentary instruments, to reveal our true position in the heavens.

We can gain insights into how this profound shift unfolded by looking at the actual notes left by the astronomers who contributed to it. These notes give us a clue to the labor, insights and genius that drove the Copernican revolution.

Imagine you’re an astronomer from antiquity, exploring the night sky without the aid of a telescope. At first the planets don’t really distinguish themselves from the stars. They’re a bit brighter than most stars and twinkle less, but otherwise look like stars.

In antiquity, what really distinguished planets from stars was their motion through the sky. From night to night, the planets gradually moved with respect to the stars. Indeed “planet” is derived from the ancient Greek for “wandering star.”

The motion of Mars over many weeks.

And planetary motion isn’t simple. Planets appear to speed up and slow down as they cross the sky. Planets even temporarily reverse direction, exhibiting “retrograde motion.” How can this be explained? 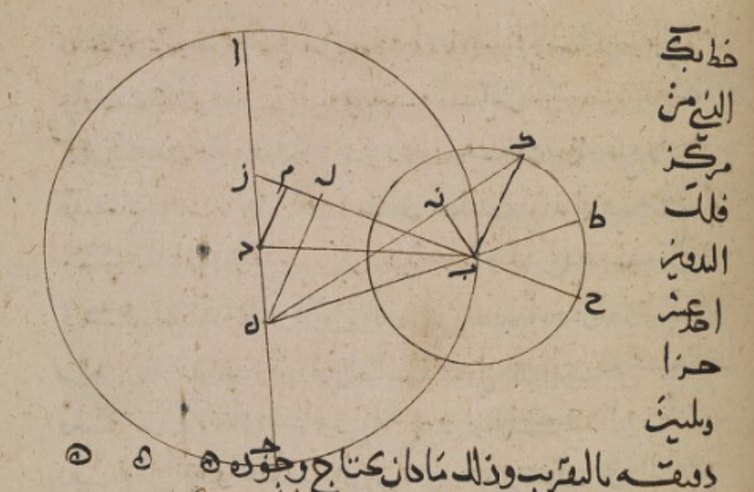 A page of an Arabic copy of Ptolemy’s Almagest, illustrating the Ptolemaic model for a planet moving around the Earth. Image via Qatar National Library.

Ancient Greek astronomers produced geocentric (Earth-centered) models of the solar system, which reached their pinnacle with the work of Ptolemy. This model, from an Arabic copy of Ptolemy’s Almagest, is illustrated above.

It is rather complex. But, to his credit, Ptolemy’s model predicted the positions of planets in the night sky with an accuracy of a few degrees (sometimes better). And it thus became the primary means of explaining planetary motion for over a millennium. 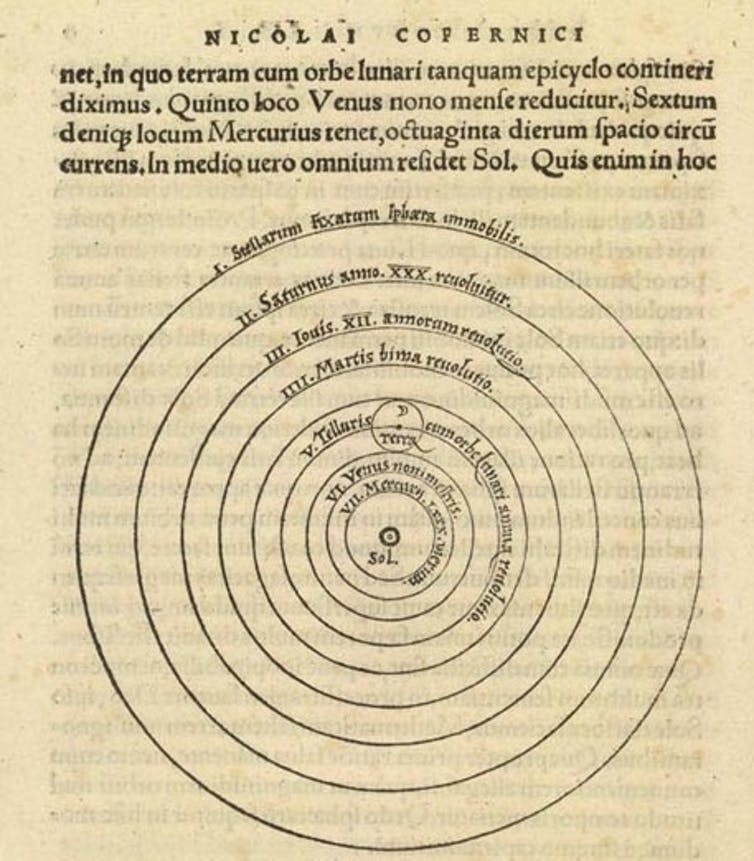 The Copernican Revolution placed the sun at the center of our solar system. Image via Library of Congress.

In 1543, the year of his death, Nicolaus Copernicus started his eponymous revolution with the publication of De revolutionibus orbium coelestium (On the Revolutions of the Celestial Spheres). Copernicus’ model for the solar system is heliocentric, with the planets circling the sun rather than Earth.

Perhaps the most elegant piece of the Copernican model is its natural explanation of the changing apparent motion of the planets. The retrograde motion of planets such as Mars is merely an illusion, caused by the Earth “overtaking” Mars as they both orbit the sun. 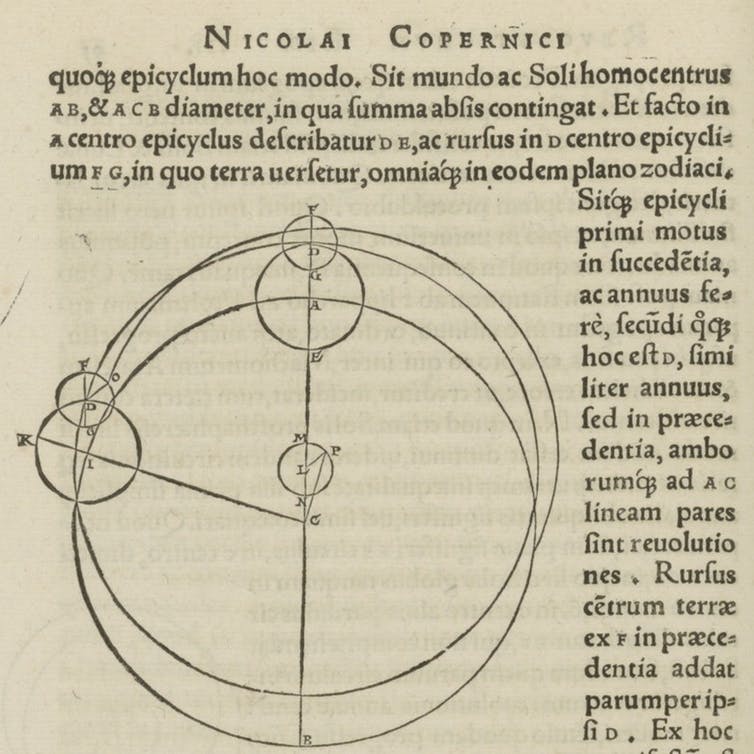 The original Copernican model has similarities to Ptolemaic models, including circular motions and epicycles. Image via Library of Congress.

Unfortunately, the original Copernican model was loaded with Ptolemaic baggage. The Copernican planets still traveled around the solar system using motions described by the superposition of circular motions. Copernicus disposed of the equant, which he despised, but replaced it with the mathematically equivalent epicyclet.

Astronomer-historian Owen Gingerich and his colleagues calculated planetary coordinates using Ptolemaic and Copernican models of the era, and found that both had comparable errors. In some cases the position of Mars is in error by 2 degrees or more (far larger than the diameter of the moon). Furthermore, the original Copernican model was no simpler than the earlier Ptolemaic model.

As 16th century astronomers did not have access to telescopes, Newtonian physics, and statistics, it wasn’t obvious to them that the Copernican model was superior to the Ptolemaic model, even though it correctly placed the sun in the centre of the solar system. 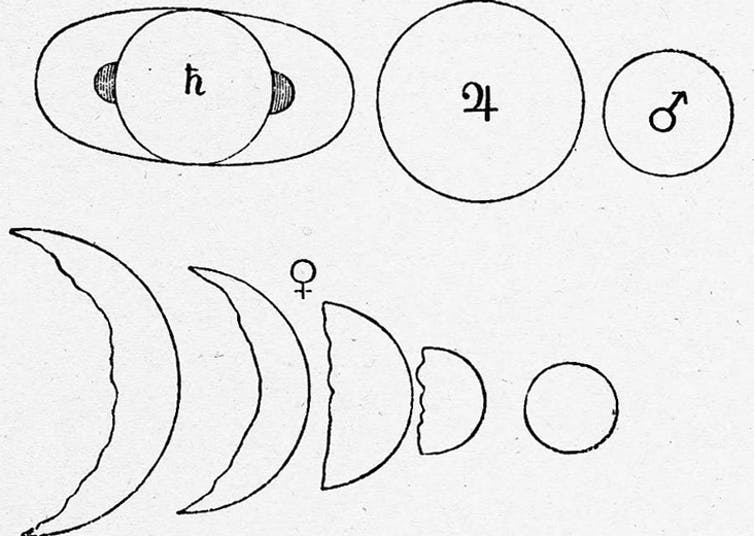 Galileo’s telescopic observations of the planets, including the phases of Venus, demonstrated that planets travel around the sun. Image via NASA.

From 1609, Galileo Galilei used the recently invented telescope to observe the sun, moon and planets. He saw the mountains and craters of the moon, and for the first time revealed the planets to be worlds in their own right. Galileo also provided strong observational evidence that planets orbited the sun.

Galileo’s observations of Venus were particularly compelling. In Ptolemaic models, Venus remains between the Earth and the sun at all times, so we should mostly view the night side of Venus. But Galileo was able to observe the day-lit side of Venus, indicating that Venus can be on the opposite side of the sun from the Earth.

Johannes Kepler triangulated the position of Mars by using observations of Mars when it returned to the same position in its orbit. Image via University of Sydney.

The circular motions of Ptolemaic and Copernican models resulted in large errors, particularly for Mars, whose predicted position could be in error by several degrees. Johannes Kepler devoted years of his life to understanding the motion of Mars, and he cracked this problem with a most ingenious weapon.

As Kepler knew the dates when a planet would be at the same position in space, he could use the different positions of the Earth along its own orbit to triangulate the planets’ positions, as illustrated above. Kepler, using astronomer Tycho Brahe’s pre-telescopic observations, was able to trace out the elliptical paths of the planets as they orbited the sun.

This allowed Kepler to formulate his three laws of planetary motion and predict planetary positions with far greater precision than previously possible. He thus laid the groundwork for the Newtonian physics of the late 17th century, and the remarkable science that followed.

To me, however the truth is more pious still, and (with all due respect to the Doctors of the Church) I prove philosophically not only that the earth is round, not only that it is inhabited all the way around at the antipodes, not only that is it contemptibly small, but also that it is carried along among the stars.

This article was originally published in The Conversation. Read the original article.

Bottom line: Insights into Copernicus’ revolution and Galileo’s vision from the astronomers’ notes and drawings.