Titan may be a large moon – its name even implies it – but it’s still dwarfed by its parent planet, Saturn. Beautiful image from the Cassini spacecraft. 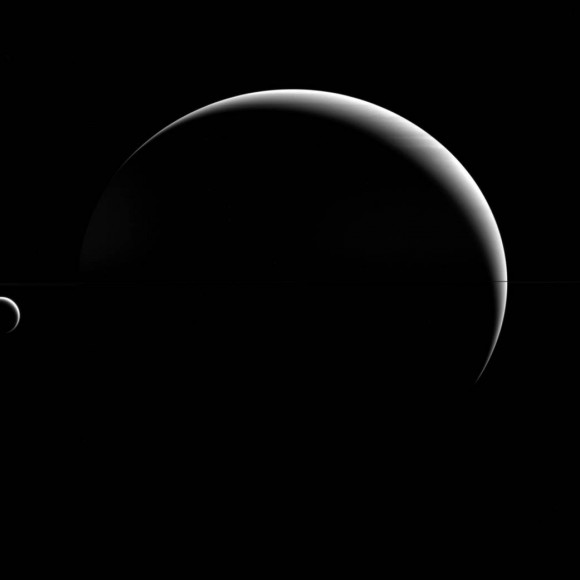 View larger. | Titan is on the left in this image; Saturn is the large body in the center. Image via NASA/JPL-Caltech/Space Science Institute

The Cassini spacecraft was on the night side of both the planet Saturn and its large moon Titan when it captured this image on April 18, 2015. This view was acquired at a distance of approximately 930,000 miles (1.5 million kilometers) from Titan. North on Titan is up. Image scale is 56 miles (90 kilometers) per pixel.

Although Titan, at 5150 kilometers (3200 miles) across, is the second-largest moon in the solar system, planet Saturn is still much bigger, with a diameter almost 23 times larger than Titan’s. This disparity between planet and moon is the norm in the solar system. Earth’s diameter is “only” 2.3 times our moon’s diameter, making our natural satellite something of an oddity. (Another exception to the rule: dwarf planet Pluto’s diameter is just under two times that of its moon.) So the question isn’t why is Titan so small (relatively speaking), but why is Earth’s moon so relatively big?

Titan is the largest of Saturn’s 53 known moons, a bit bigger than the planet Mercury. The only moon in our solar system that’s bigger than Titan is Jupiter’s moon Ganymede.

Here are 10 more Need to Know facts about Saturn from NASA:

1. If the sun were as tall as a typical front door, the Earth would be the size of a nickel and Saturn would be about as big as a basketball.

3. One day on Saturn takes 10.7 hours (the time it takes for Saturn to rotate or spin once). Saturn makes a complete orbit around the sun (a year in Saturnian time) in 29 Earth years.

4. Saturn is a gas-giant planet and does not have a solid surface.

5. Saturn’s atmosphere is made up mostly of hydrogen (H2) and helium (He).

6.. Saturn has 53 known moons with an additional 9 moons awaiting confirmation of their discovery.

7. Saturn has the most spectacular ring system of all our solar system’s planets. It is made up of seven rings with several gaps and divisions between them.

8. Five missions have been sent to Saturn. Since 2004, Cassini has been exploring Saturn, its moons and rings.

9. Saturn cannot support life as we know it. However, some of Saturn’s moons have conditions that might support life.

10. When Galileo Galilei looked at Saturn through a telescope in the 1600s, he noticed strange objects on each side of the planet and drew in his notes a triple-bodied planet system and then later a planet with arms or handles. The handles turned out to be the rings of Saturn. 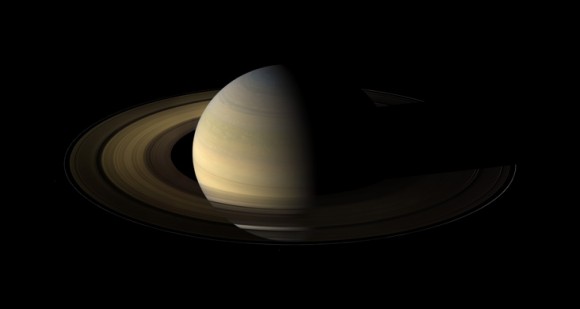 Bottom line: Image of Saturn and its largest moon Titan, taken by the Cassini spacecraft on April 18, 2015