New observations by the ALMA telescope in Chile have revealed a never-before-seen disk of cool, interstellar gas wrapped around Sagittarius A*, the giant black hole at the center of our galaxy. 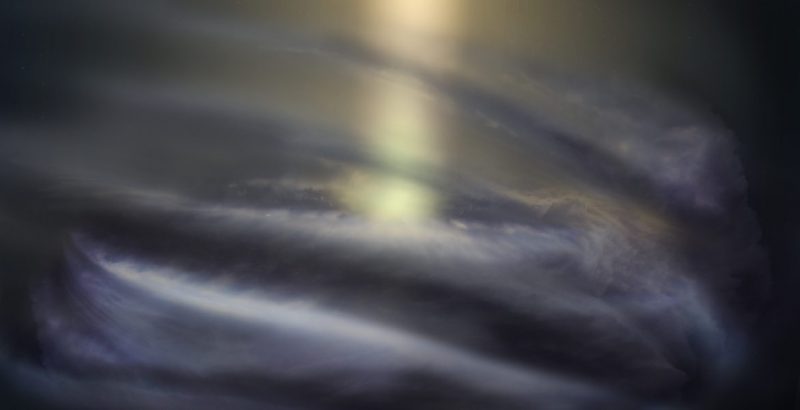 Artist’s concept of ring of cool interstellar gas surrounding the supermassive black hole at the center of our Milky Way galaxy. New observations by the ALMA telescope in Chile have revealed this structure for the first time. Image via NRAO/AUI/NSF; S. Dagnello.

For decades, since they became aware of its presence in the 1970s, astronomers have tried to eke out information about the central supermassive black hole at the heart of our Milky Way galaxy. They call it Sagittarius A* or Sag A* (pronounced Sagittarius A “star”). They know it’s 26,000 light-years away and as massive as 4 million stars the mass of our sun. But interstellar dust in the direction of the galaxy’s center has made studies of Sag A* difficult. This week (June 5, 2019), astronomers working with the ALMA telescope in Chile announced their discovery of a never-before-seen disk of cool interstellar gas wrapped around our galaxy’s giant black hole. They said this disk gives them new insights into the process of accretion, that is, the way the black hole siphons material from surrounding space. The results were published June 5 in the peer-reviewed journal Nature.

The National Radio Astronomy Observatory(NRAO), which helps to operate ALMA, described the region around Sag A* in a statement:

We now know that this region is brimming with roving stars, interstellar dust clouds, and a large reservoir of both phenomenally hot and comparatively colder gases. These gases are expected to orbit the black hole in a vast accretion disk that extends a few tenths of a light-year from the black hole’s event horizon.

Until now, however, astronomers have been able to image only the tenuous, hot portion of this flow of accreting gas, which forms a roughly spherical flow and showed no obvious rotation. Its temperature is estimated to be a blistering 10 million degrees Celsius (18 million degrees Fahrenheit), or about two-thirds the temperature found at the core of our sun. At this temperature, the gas glows fiercely in X-ray light, allowing it to be studied by space-based X-ray telescopes, down to scale of about a tenth of a light-year from the black hole.

In addition to the hot gases detected by X-ray telescopes, astronomers have also seen signs of cooler gas (about 10 thousand degrees Celsius, or 18,000 degrees Fahrenheit) within a few light-years of the black hole. NRAO said:

The contribution of this cooler gas to the accretion flow onto the black hole was previously unknown.

It’s this cooler gas that the ALMA telescope has now been able to detect. ALMA – which stands for Atacama Large Millimeter/submillimeter Array – is a radio telescope, with the ability to peer through the dust between us and the galactic center. It has now produced the first-ever image of the cooler gas disk at only about a hundredth of a light-year away (or about 1,000 times the distance from the Earth to the sun) from the Milky Way’s supermassive black hole. Here’s the image: 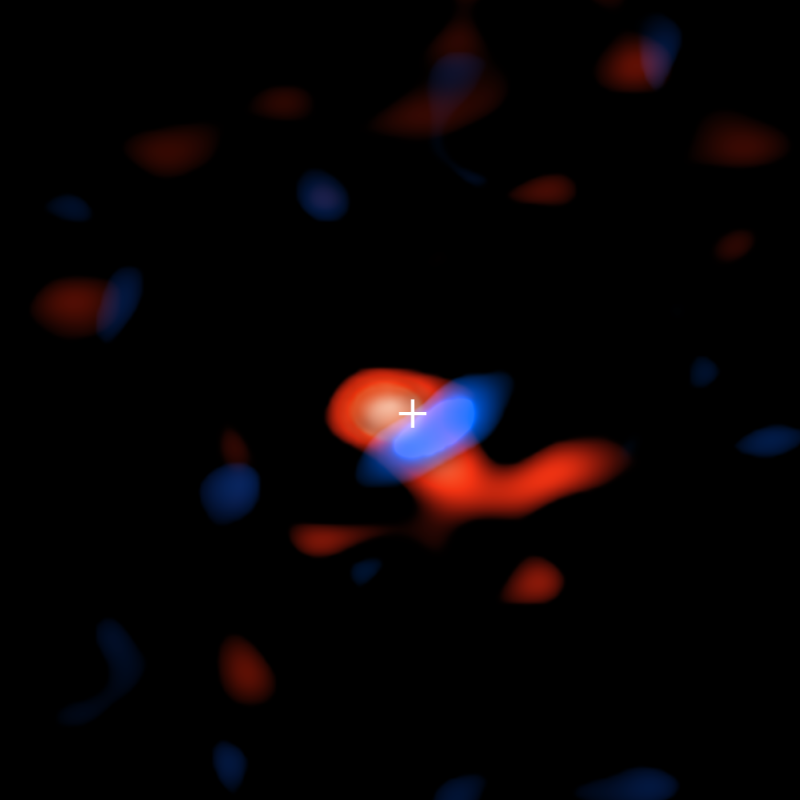 ALMA image of the disk of cool hydrogen gas flowing around the supermassive black hole at the center of our galaxy. The colors represent the motion of the gas relative to Earth: the red portion is moving away, so the radio waves detected by ALMA are slightly stretched, or shifted, to the “redder” portion of the spectrum; the blue color represents gas moving toward Earth, so the radio waves are slightly scrunched, or shifted, to the “bluer” portion of the spectrum. Crosshairs indicate location of black hole. Image via ALMA (ESO/NAOJ/NRAO), E.M. Murchikova; NRAO/AUI/NSF, S. Dagnello.

The researchers estimate that the amount of hydrogen in this cool disk is about one-tenth the mass of Jupiter, or one ten-thousandth of the mass of the sun. NRAO said:

By mapping the shifts in wavelengths of this radio light due to the Doppler effect (light from objects moving toward the Earth is slightly shifted to the “bluer” portion of the spectrum while light from objects moving away is slightly shifted to the “redder” portion), the astronomers could clearly see that the gas is rotating around the black hole. This information will provide new insights into the ways that black holes devour matter and the complex interplay between a black hole and its galactic neighborhood.

Elena Murchikova at the Institute for Advanced Study in Princeton, New Jersey, is lead author on the new paper. She said:

We were the first to image this elusive disk and study its rotation. We are also probing accretion onto the black hole. This is important because this is our closest supermassive black hole. Even so, we still have no good understanding of how its accretion works. We hope these new ALMA observations will help the black hole give up some of its secrets. 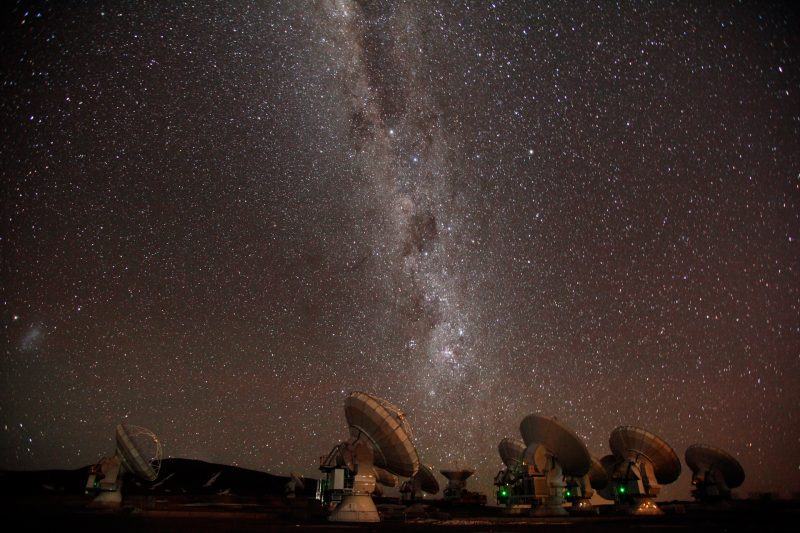 The Milky Way over the antennas of the Atacama Large Millimeter/submillimeter Array (ALMA), a sophisticated radio telescope array in the Atacama desert of northern Chile. Image via C. Padilla, NRAO/AUI/NSF.

Bottom line: New observations by the ALMA telescope in Chile have revealed a never-before-seen disk of cool interstellar gas wrapped around Sagittarius A*, the giant black hole at the center of our galaxy.