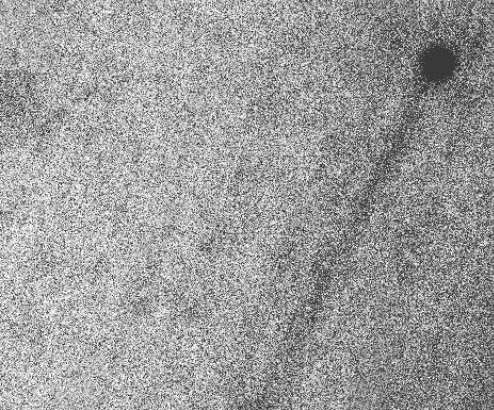 The faint tail can be seen in active asteroid 62412. Image credit: Scott Sheppard

A team of scientists has discovered a new ‘active asteroid’, called 62412, in the solar system’s main asteroid belt between Mars and Jupiter.

Active asteroids have stable orbits between Mars and Jupiter like other asteroids. However, unlike other asteroids, they sometimes have the appearance of comets, when dust or gas is ejected from their surfaces to create a sporadic tail effect.

The two-person team, Scott Sheppard of the Carnegie Institution and Chadwick Trujillo of the Gemini Observatory, discovered an unexpected tail on 62412, an object which had been known as a typical asteroid for over a decade. Their findings reclassify it as an active asteroid. Scientists don’t know the reasons for this loss of material and subsequent tail in active asteroids, although there are several theories such as recent impacts or sublimation from solid to gas of exposed ices. Sheppard said:

In the past, asteroids were thought to be mostly unchanging objects, but an improved ability to observe them has allowed scientists to discover tails and comas, which are the thin envelope of an atmosphere that surrounds a comet’s nucleus.

Sheppard will present his team’s findings at the American Astronomical Society’s Division of Planetary Sciences meeting and participate today in a press conference organized by the society.