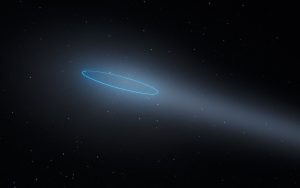 This artist’s impression shows the binary asteroid 288P, located in the main asteroid belt between the planets Mars and Jupiter. The object is unique as it is a binary asteroid which also behaves like a comet. The comet-like properties are the result of water sublimation, caused by the heat of the Sun. The orbit of the asteroids is marked by a blue ellipse.

Thank you! Your submission has been received!
Oops! Something went wrong while submitting the form.
END_OF_DOCUMENT_TOKEN_TO_BE_REPLACED