Comets are loose collections of ice and dust, sometimes with long tails. Asteroids are more rocky or metallic. Now astronomers have found a comet-like double asteroid.

This set of Hubble Space Telescope photos shows a pair of asteroids orbiting each other. This binary asteroid – – labled 2006 VW139/288P – also has comet-like features, including a bright halo of material, called a coma, and a long tail of dust. Astronomers observed the asteroid pair in September 2016, just before it made its closest approach to the sun. Image via HubbleSite.

A German-led group of astronomers announced on September 20, 2017 that they’ve used the Hubble Space Telescope to discover an object that’s a binary asteroid – two asteroids orbiting each other – with comet-like features. Other comet-asteroid hybrids are known, for example 3200 Phaethon, which spawns the annual Geminid meteor shower. They’re sometimes called rock comets, or active asteroids. But this is the first double asteroid found so far with a comet-like halo and tail. Labeled 2006 VW139/288P, the object is the first known binary asteroid also classified as a main-belt comet. Thus nature proves once again it’s more subtle than the web of nomenclature we’ve tossed across it.

The study of 288P is published on September 20 in the peer-reviewed journal Nature.

The study took place in September 2016, just before 288P made its closest approach to the sun. At that time, the astronomers said in a statement, it was close enough to Earth to let them get a detailed look at it using the Hubble Space Telescope.

The observations revealed that 288P – located in the asteroid belt between Mars and Jupiter – isn’t one but two asteroids of almost the same mass and size, orbiting each other at a distance of about 60 miles (100 km). That discovery was in itself an important find; because they orbit each other, the masses of the objects in such systems can be measured. In addition, according to Jessica Agarwal of the Max Planck Institute for Solar System Research, who led the study:

We detected strong indications of the sublimation of water ice due to the increased solar heating – similar to how the tail of a comet is created. 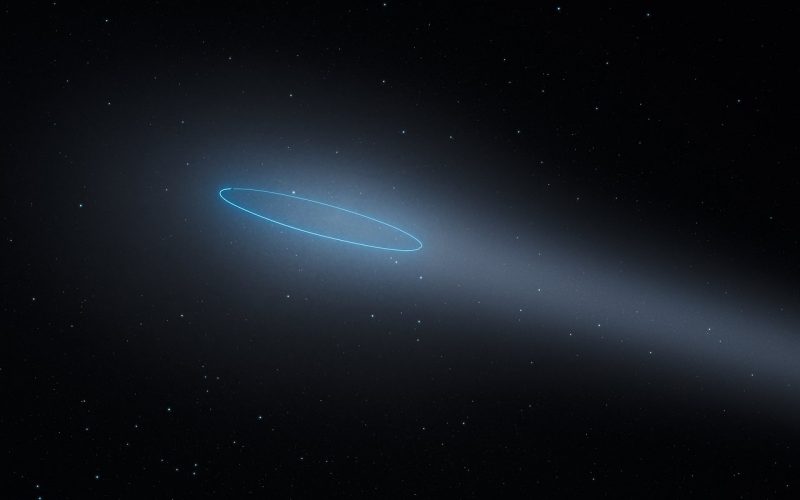 Artist’s concept of double asteroid 288P. The orbit of the 2 asteroids is marked by a blue ellipse. The comet-like tail and halo of the 2 result from water ice turning directly to water vapor, due to the sun’s heat. Image via ESA/ Hubble/ L. Calçada.

For various reasons, 288P is unique among the few known wide asteroid binaries in our solar system. The separation of the two asteroids is unusually wide; the near-equal size of the two is unusual; the comet-like activity is unusual; plus 288P has a high orbital eccentricity, that is, its orbit around the sun is far from being a perfect circle. For all of these reasons, 288P is unique among binary asteroids.

Its observed activity also reveals information about its past, Agarwal said, adding:

Surface ice cannot survive in the asteroid belt for the age of the solar system but can be protected for billions of years by a refractory dust mantle, only a few meters thick.

From this, the team concluded that 288P has existed as a binary system for only about 5,000 years. Agarwal elaborated on the formation scenario:

The most probable formation scenario of 288P is a breakup due to fast rotation. After that, the two fragments may have been moved further apart [by forces acting on the fragments as they underwent sublimation].

These astronomers commented in their statement:

As finding 288P included a lot of luck, it is likely to remain the only example of its kind for a long time.

They called for a need for more theoretical and observational work, as well as the discovery of more objects similar to 288P, in order to be able to answer all their questions about it.

Astronomers categorize the minor bodies in the solar system according to their location and physical composition. Comets are a loose collection of ice and dust that fall in toward the sun from beyond the orbits of the major planets, and grow long tails of dust and gas along the way. Asteroids are rocky or metallic and are relegated to a zone between Mars and Jupiter. But this object – 2006 VW139/288P – is the first known binary asteroid that’s also classified as a main-belt comet. Image via HubbleSite.

Bottom line: Asteroid 2006 VW139/288P is the first object to be classified as a binary or double asteroid and also a main-belt comet.