A spacecraft using Comet Hitchhiker orbits and lands on multiple comets and asteroids using a harpoon and tether and the energy of motion of the small bodies themselves. 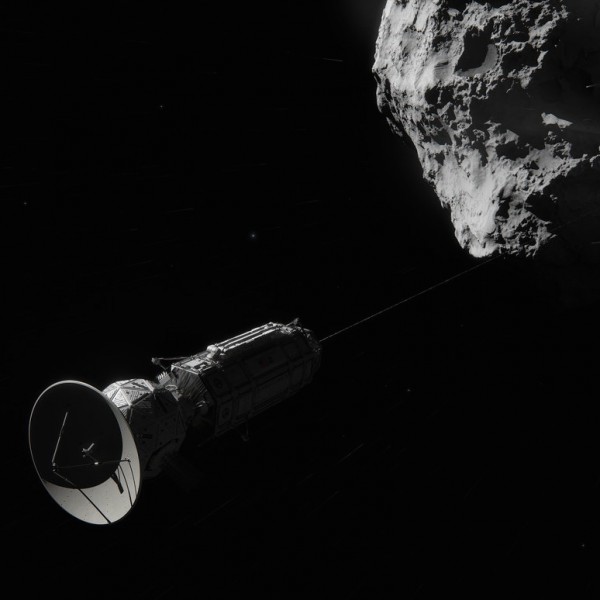 This artist concept shows Comet Hitchhiker, an idea for traveling between asteroids and comets using a harpoon and tether system. Image via NASA/JPL-Caltech/Cornelius Dammrich

There’s only one spacecraft from Earth that has ever orbited a body in our solar system, left orbit, and then gone on to orbit a second world. That is the Dawn spacecraft, which entered orbit around asteroid Vesta on July 16, 2011, and completed a 14-month survey mission before heading off to the dwarf planet Ceres – another world in the asteroid belt between Mars and Jupiter – which it began orbiting on March 6, 2015. But, if Masahiro Ono of NASA’s Jet Propulsion Laboratory has his dream come true, there will someday be other spacecraft that routinely go between solar system bodies, via what he calls hitchhiking.

Ono has been working to develop the Comet Hitchhiker concept at the Jet Propulsion Laboratory in Pasadena, California. This week, Ono presented some new results about the concept at the American Institute of Aeronautics and Astronautics SPACE conference.

In a statement released by JPL on September 1, 2015, he said he had Hitchhiker’s Guide to the Galaxy in mind from the beginning.

Unlike the Dawn spacecraft, which was able to go from Vesta to Ceres via an ion propulsion system, a spacecraft using Comet Hitchhiker will go into orbit and even land on multiple bodies using the kinetic energy – the energy of motion – of the comets and asteroids themselves. Ono said in his statement:

Instead of a thumb, our idea is to use a harpoon and a tether.

The idea is to employ a reusable tether system instead of a propellant for entering orbit and landing. One of the great features of this idea is that – unlike a propellant – a tether doesn’t get used up, and so the craft can visit many bodies. The statement explained:

This technique is analogous to fishing on Earth. Imagine you’re on a boat on a lake with a fishing pole, and want to catch a big fish. Once the fish bites, you would release more of the line with a moderate tension, rather than holding it tightly. With a long enough line, the boat will eventually catch up with the fish.

Once the spacecraft matches its velocity to the ‘fish’ – the comet or asteroid, in this case – it is ready to land by simply reeling in the tether and descending gently.

When it’s time to move on to another celestial target, the spacecraft would use the harvested energy to quickly retrieve the tether, which accelerates the spacecraft away from the body.

Ono said he envisions “even five to 10 space targets in a single mission.”

He explained how the Comet Hitchhiker has evolved over the past few years. As part of a Phase I study through the NASA Innovative Advanced Concepts (NIAC) Program, he and his colleagues studied whether a harpoon could tolerate an impact of this magnitude, and whether a tether could be created strong enough to support this kind of maneuver. They used supercomputer simulations and other analyses to figure out what it would take and have now come up with what they call the Space Hitchhike Equation, which relates the specific strength of the tether, the mass ratio between the spacecraft and the tether, and the change in velocity needed to accomplish the maneuver.

Ono explained that, for any spacecraft landing on a comet or asteroid, being able to slow down enough to arrive safely is critical. That’s why Comet Hitchhiker requires a tether made from a material that can withstand the enormous tension and heat generated by a rapid decrease in speed for getting into orbit and landing.

He and colleagues have now calculated that a velocity change of about 0.9 miles (1.5 kilometers) per second – which like going from Los Angeles to San Francisco in under seven minutes – is possible with some materials that already exist. Those materials are Zylon and Kevlar.

However, the bigger the velocity change required for orbit insertion, the shorter the flight time needed to get from Earth to the target. And short flight times are desirable. Imagine being able to go from Earth to Pluto in 5 years, instead of nearly 10, as New Horizons recently did.

To accommodate a larger velocity change at orbit insertion, needed if you want to get to a comet or asteroid faster, you need even stronger materials. A 6.2 mile-per-second (10 kilometer-per-second) velocity change is possible, but would require more advanced technologies such as a carbon nanotube tether and a diamond harpoon.

Ono and his researchers also estimated that the tether would need to be about 62 to 620 miles long (100 to 1,000 kilometers) for the hitchhiking maneuver to work. It would need to be extendable, and capable of absorbing jerks on it, while avoiding being damaged or cut by small meteorites.

The team also envisioned future next steps for studying the concept. That would involve more high-fidelity simulations and trying to cast a mini-harpoon at a target that mimics the material found on a comet or asteroid. 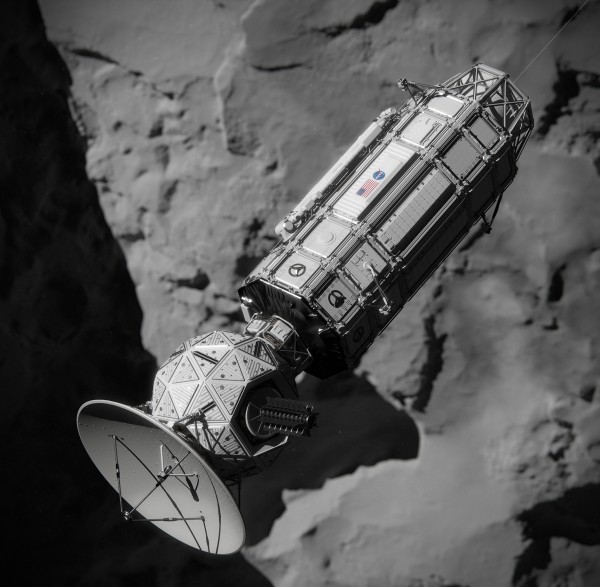 Bottom line: A cool idea for fast propulsion among asteroids and comets in our solar system is the Comet Hitchhiker concept. A spacecraft using Comet Hitchhiker would go into orbit and even land on multiple bodies using a harpoon and tether system to utilize the kinetic energy – the energy of motion – of the comets and asteroids themselves.

Read a description of Comet Hitchhiker from Masahiro Ono