Comet Finlay is in outburst!

With a small ‘scope or large binoculars, you can catch Comet Finlay. It’ll be near Mars on December 23 and 24. Cool photo opportunity for those equipped to catch it! 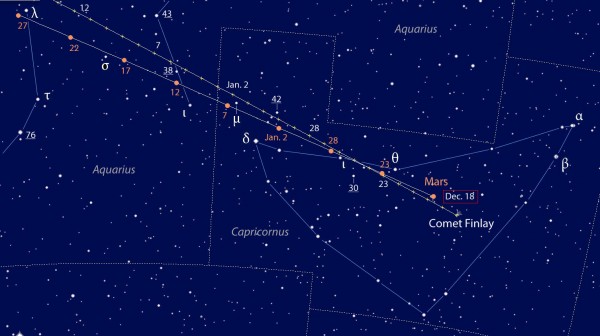 View larger. | Nightly position of Comet Finlay from December 18 to January 12. Comet Finlay is in the sky after sunset – along the sun’s path across our sky – in front of the well-known constellations of the Zodiac. It’s tracking more or less along with the planet Mars on the sky’s dome and will appear very near Mars on December 23 and 24. Chart via Bob King at Universe Today, and via Chris Marriott’s SkyMap software. Used with permission.

Comet 15P/Finlay isn’t a surprise visitor to our solar system. William Henry Finlay first discovered it in 1886, and it’s been tracked with telescopes on its returns near the sun – now about every 6.5 years – at every return since 1953. Comet Finlay will come to closest to the sun next on December 27, 2014, and, as happens for many comets, as it has drawn in closer to the sun that binds it in orbit, Comet Finlay has gotten brighter. This week, the comet did something unexpected. It had an outburst, bringing it within view of 10X50 or larger binoculars!

Its magnitude was a dim +11. It brightened to +8.7, brighter than it was expected to be at its brightest on this return near the sun, but still not bright enough to see with the eye. It’s a photographic target, however, for those equipped for astrophotography.

What’s more, the comet is easily accessible to those with small telescopes or large binoculars in the sky after sunset, as seen from around the globe. It will come very near the planet Mars on our sky’s dome (not actually near, as Comet Siding Spring did in October, but apparently near). Bob King at Universe Today wrote that:

Mars and Finlay’s paths intersect on December 23, when the duo will be in close conjunction only about 10 arc minutes apart (1/3 the diameter of the full moon) for observers in the Americas. They’ll continue to remain almost as close on Christmas Eve.

The comet’s outburst was noticed this week, by the way, by Czech comet observer Jakub Cerny and his team as they photographed the comet on December 16.

These surges in a comet’s brightness aren’t entirely understood, but they are common as the sun warms the volatile ices on a comet’s surface. An outburst like this one may last for days … or weeks. 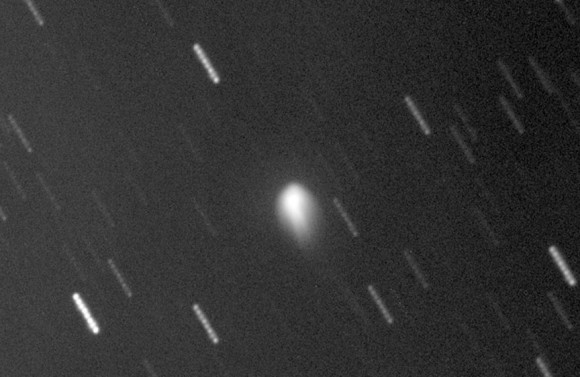 Comet 15P/Finlay as it appeared on December 16, 2014. Notice its coma – the brightly shining cloud of gas that encircles a comet’s nucleus, or core, as the comet draws near the sun. If you look closely, you can also see a short comet tail. Image via J. Cerny, M. Masek, K. Honkova, J. Jurysek, J. Ebr, P. Kubanek, M. Prouza, M. Jelinek

The orbital path of Comet 15P Finlay. Notice that it orbits very nearly in the plane of the solar system. That’s why we see it in our sky against the constellations of the Zodiac. Image via JPL / Kevin Curran.

Bottom line: Comet 15P/Finlay has gotten suddenly brighter. It’s brighter than it was expected to be, at its brightest, for this return near the sun. If you have a small telescope or large binoculars, you can now catch Comet Finlay now in the sky after sunset, not far from the place where the sun went down. It will be very near the planet Mars on December 23 and 24, 2014.