How to see Comet Catalina

Hints on how to perceive the comet’s gradual motion across the sky as it sweeps closest – but not too close – around January 17. 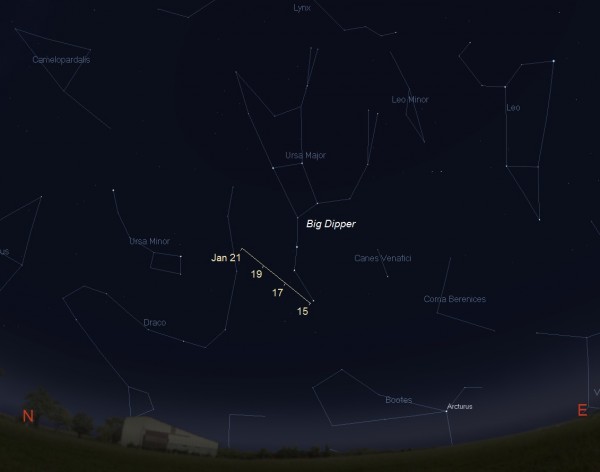 View larger. | Facing northeast beginning around 1 a.m. local time – the time on your clock from most parts of the globe – until sunrise from January 15 to 21, 2016. Comet Catalina passes very close to the stars that form the Big Dipper as it nears its closest point to Earth. Illustration by Eddie Irizarry using Stellarium.

UPDATE JANUARY 14, 2016: Comet C/2013 US10 (Catalina) will pass nearest to Earth at a very safe distance this weekend, on January 17. At its closest, the comet will be some 68 million miles (110 million km) from Earth. It isn’t visible to the eye alone, but binoculars should reveal it as a small fuzzy patch of light in the sky after midnight and before dawn. If you have a small telescope, this comet will make a fantastic target. Although the actual movement of the comet is difficult to perceive in real time because of its distance, you should be able to see that the comet has shifted its position, over perhaps a quarter of an hour, through a telescope. With your ‘scope, take a good look at the comet as well as stars in the vicinity of this celestial visitor. Try making a simple sketch of the comet’s location relative to nearby stars. Then, look again through the telescope eyepiece about 15 or 20 minutes later, and you will clearly see Comet Catalina has changed position!

Due to its distance, the comet appears to move slowly across the sky. However, it is traveling through space at an astounding speed of 132,000 miles per hour (212,433 km/h).

In the coming days, the comet is passing near on the sky’s dome to the stars that form the Big Dipper. Current brightness estimates put Comet Catalina at a magnitude 6.2 to 6.4, just below the level for viewing with the unaided eye, but visible in binoculars, and a fine object for a small telescope. Try looking in the wee hours after midnight, or before sunrise.

When and where should I begin to look?

Here are some important dates

When is the next predicted comet visible to the eye alone? 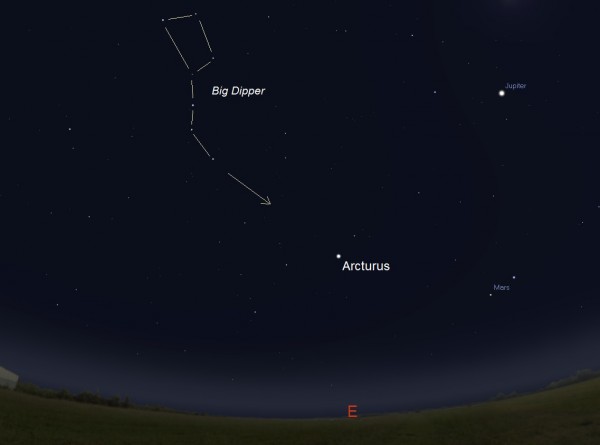 Facing east beginning around 4:30 a.m. local time until sunrise in early January. Notice that the stars that form the Big Dipper’s handle point to the bright orange or reddish star Arcturus. Before sunrise on January 9, Comet Catalina will be located at the tip of the arrow. Illustration by Eddie Irizarry using Stellarium. 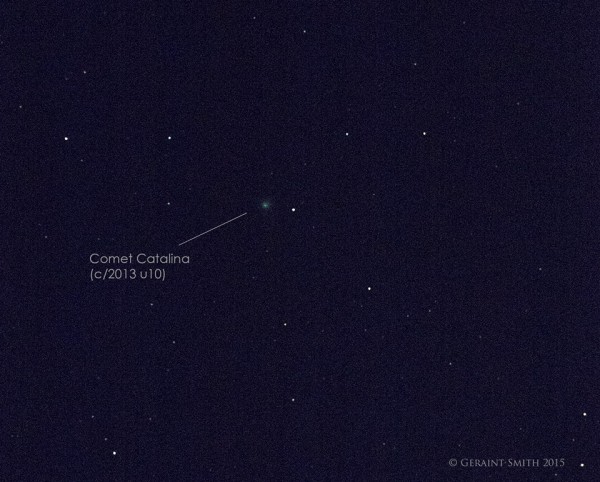 When and where should I begin to look? The comet is still primarily in our morning sky. By 1 a.m., it’s up above the northeastern horizon.

Its brightness has been pretty steady, and, by all reports, Comet Catalina has never risen above magnitude 6, the limit of visibility to the unaided eye. But it has hovered just below that limit.

The moon is back in the evening sky now and has left the morning sky dark. That’s good! If you go to a location far from city lights, you should be able to sweep with your binoculars and find this comet.

The comet was closest to the sun on November 15, 2015, so it is moving away from the sun now. On January 17, 2016, Comet Catalina will be at its closest point to Earth, about some 68 million miles (110 million km) away. That’s in contrast to the moon’s distance of about a quarter million miles … so you can see the comet will come nowhere near us.

Remember – because it’s relatively close to us in contrast to the star background – the comet is moving slowly across our sky’s dome. When the comet is closest, you should be able to detect this motion through the eyepiece of your telescope in about 15 or 20 minutes.

Want a more detailed chart? Or check out this chart from skyandtelescope.com.

What will Comet Catalina look like? The comet’s tail has been some 500,000 miles (800,000 km) long! And it has shown a double tail. Some photos have captured even more detail. With binoculars, though, you’re likely to spot the comet as a small, circular, hazy patch. You might see at most a short tail for this comet. It’s likely you won’t see any color at all.

Telescopes will provide a better view. Even while observing visually with a telescope, you will not see the green color of the comet, as shown some photos. That color is mainly seen in pictures of this comet, and many comets. Cameras are more sensitive than the human eye and after a few seconds or minutes of exposure, they provide very good views of the colors that exist in comets.

But visual observers using telescopes in December, 2015, might be able to glimpse a hint of Comet Catalina’s green coma or cometary atmosphere.

And, by the way, the green color we see in comets is from gases like diatomic carbon. 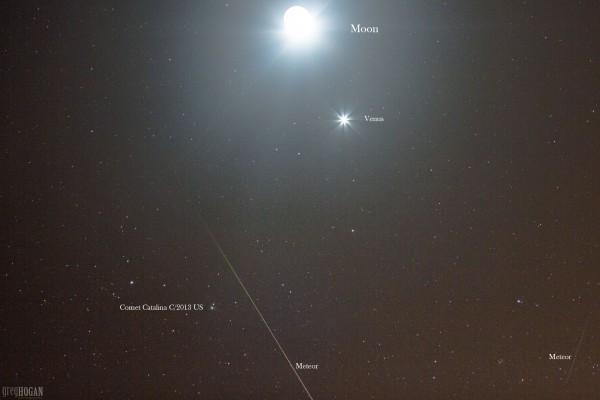 Here are some important dates.

October 31, 2013. The Catalina Sky Survey in Arizona discovered a comet, later called C/2013 US10 (Catalina). At first, astronomers thought it was a rocky or metallic asteroid, but further observations confirmed it as an icy comet.

December 31,2015. Comet will be approaching the apparent position of the star Arcturus on our sky’s dome. Another good photo opportunity.

January 1,2016. Comet Catalina will be passing very close to star Arcturus. An excellent reference to finding the comet in the sky!

January 17,2016. Comet Catalina will pass some 68 million miles (110 million km) from Earth. That’s very, very far from Earth – hundreds of times farther than the moon’s distance. So there is no danger of a collision. That said, let’s talk about the size of the comet’s nucleus or core. Some estimates indicate the nucleus of Comet Catalina ranges between 4 and 20 kilometers in diameter. 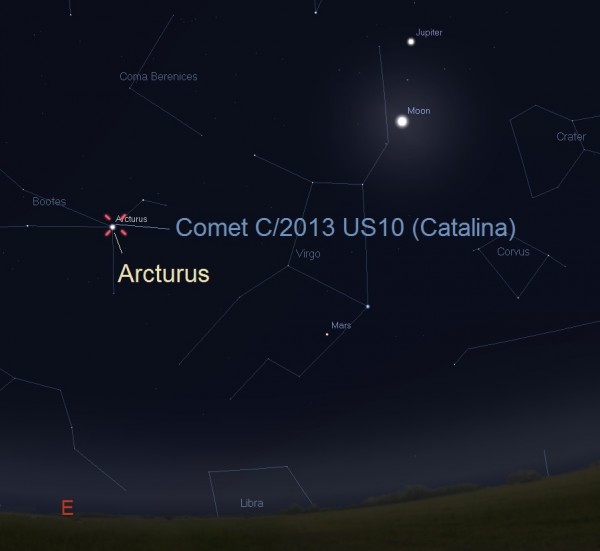 January 1, 2016, from 2 a.m. to sunrise, local time. The comet will be very near the bright star Arcturus in the constellation Bootes. Photo opportunity!

Although Comet 46P may show a magnitude of 3 or 4, there is always the possibility that a newly found comet will provide a good celestial show prior to that time.

Bottom line: Comet C/2013 US10 (Catalina) is now visible in binoculars, in December, 2015. When and where to look, what to expect, some important dates to remember.

Look here for a chart from skyandtelescope.com showing the comet on various dates