Previously, NASA’s Jet Propulsion Laboratory said there was a 1 in 8,000 chance the comet would strike Mars. Now that chance has been reduced to 1 in 120,000.

UniverseToday.com is reporting today (April 15, 2013) that Comet C/2013 A1 (Siding Spring) probably will not strike the planet next door, Mars, in 2014. That possibility had been suggested via observations of the comet’s orbit made late last year. NASA’s Near-Earth Object Office now says that continued observations of the comet have made its orbit better known, and that the refinements in astronomers’ knowledge of the orbit have now reduced the possibility of a 2014 Mars impact. 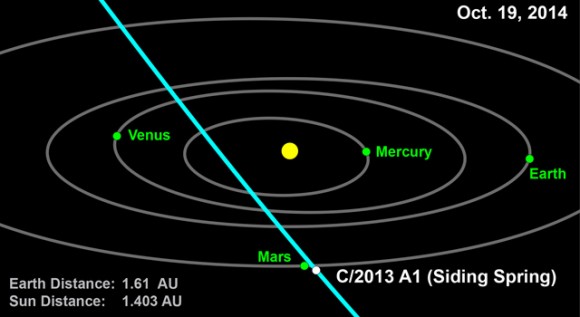 Comet 2013 A1 (Siding Spring) probably will not strike Mars in 2014, according to the latest calculations from NASA’s Near-Earth Object Office.

The comet will pass extremely close to Mars on October 19, 2014, and there continues to be a small possibility of an impact. Previously, NASA’s Jet Propulsion Laboratory said there was about a 1 in 8,000 chance the comet would strike Mars. Now that chance has been reduced to about 1 in 120,000.

C/2013 A1 (Siding Spring) is from the Oort cloud comet surrounding our solar system. Robert H. McNaught at Siding Spring Observatory discovered it on January 3, 2013 using a 0.5-meter (20-inch) Schmidt telescope. Precovery images of the comet by the Catalina Sky Survey from December 8, 2012 were quickly found. The longer astronomers can observe a distant comet, the more precisely they can understand its orbit, so further refinements in our knowledge of the orbit are expected.

By the way, the spacecraft MAVEN and Mangalyaan will arrive at Mars in 2014, one month before closest approach of Comet C/2013 A1. Meanwhile, the Mars Reconnaissance Orbiter, Mars Express, and 2001 Mars Odyssey are in orbit around Mars, and the Curiosity and Opportunity rovers are exploring Mars on the ground. The comet is not expected to create a spectacular meteor shower on Mars or be a threat to the spacecraft in orbit or on the ground. 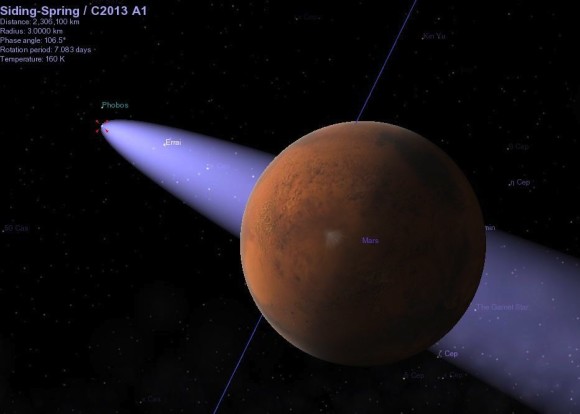 Bottom line: Comet C/2013 A1 probably will not strike Mars, according to a report at UniverseToday.com on April 15, 2013.