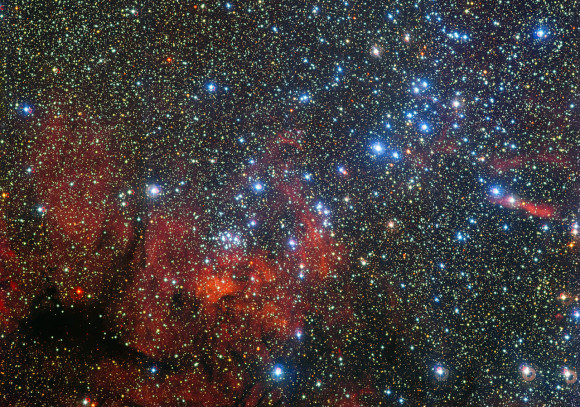 View larger. | This new image of NGC 3590 is from the 2.2-meter telescope at ESO’s La Silla Observatory in Chile. Image via ESO

Meet NGC 3590, a small open cluster of stars around 7,500 light-years from Earth in the southern constellation Carina the Keel. This region of space is a gathering of dozens of stars probably born together from a single cloud of gas, and still loosely bound together by gravity. The cluster is thought to be roughly 35 million years old. The European Southern Observatory (ESO), which acquired this image, says this cluster isn’t just pretty. It’s also helping astronomers understand the Milky Way galaxy in which our sun and Earth reside:

By studying this particular cluster — and others nearby — astronomers can explore the properties of the spiral disk of our galaxy, the Milky Way. NGC 3590 is located in the largest single segment of a spiral arm that can be seen from our position in the galaxy: the Carina spiral feature.

The Milky Way has multiple spiral arms, long curved streams of gas and stars stretching out from the galactic centre. These arms — two major star-filled arms, and two less populated minor arms — are each named after the constellations in which they are most prominent. The Carina spiral feature is seen from Earth as a patch of sky heavily populated with stars, in the Carina-Sagittarius minor arm.

The name of this arm — Carina, or The Keel — is quite appropriate. These spiral arms are actually waves of piled up gas and stars sweeping through the galactic disc, triggering sparkling bursts of star formation and leaving clusters like NGC 3590 in their wake. By finding and observing young stars like those in NGC 3590, it is possible to determine the distances to the different parts of this spiral arm, telling us more about its structure.