Plus … what infrared data show about the Ceres bright spots.

View larger. | Different processes on Ceres created different materials across its surface, shown in this new map from the Dawn spacecraft.

Information about the dwarf planet Ceres is slowly coming out, since NASA’s Dawn spacecraft began orbiting this tiny world on March 6. This new color map reveals the diversity of the Ceres’ surface and suggest Ceres was once a more active world than it is today. That’s according to Dawn researchers who spoke at the 2015 General Assembly of the European Geosciences Union in Vienna today (April 13, 2015).

Chris Russell, principal investigator for the Dawn mission, based at UCLA, said in a statement:

This dwarf planet was not just an inert rock throughout its history. It was active, with processes that resulted in different materials in different regions. We are beginning to capture that diversity in our color images.

The researchers also said that, while Ceres’ surface is heavily cratered, as expected, it appears to have fewer large craters than scientists anticipated

NASA researchers have also been scrutinizing the puzzling bright spots on Ceres’ surface.

Infrared data from Dawn has revealed that not all of Ceres’ bright spots are alike. The closest-yet images, taken from 45,000 kilometers away, suggest that at least two of the spots look different from one another when seen in infrared wavelengths. Read more about the infrared findings about the bright spots from Nature.

You might not realize that the Hubble Space Telescope saw Ceres’ bright spots years ago. Dawn’s images are the first at close range. The most interesting spots are the pair of very bright neighboring spots in Ceres’ northern hemisphere.

More detail about them will emerge after the spacecraft begins its first intensive science phase on April 23, from a distance of 8,400 miles (13,500 kilometers) from the surface. In the meantime, the origins of Ceres’ bright spots, which have captivated the attention of scientists and the public alike, remain unknown. 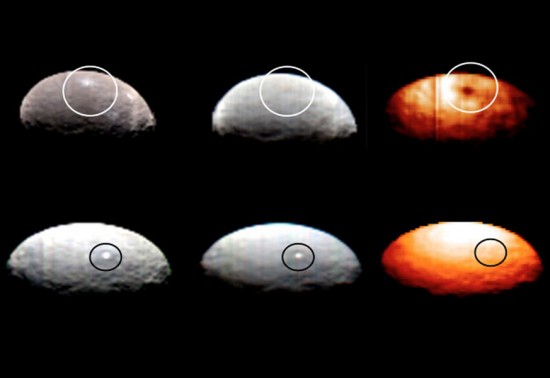 The Dawn spacecraft is the first to reach a dwarf planet, and the first spacecraft to orbit two worlds beyond Earth. Previously, Dawn had studied giant asteroid Vesta, orbiting the asteroid from 2011 to 2012 and uncovering many insights about its geology and history.

While Vesta is a dry body, Ceres is believed to be 25 percent water ice by mass. By comparing Vesta and Ceres, scientists hope to gain a better understanding of the formation of the solar system.

Both Vesta and Ceres are located in the main asteroid belt between Mars and Jupiter. The Dawn spacecraft will continue studying Ceres through June 2016.

Read more about the new color map of Ceres

Bottom line: On April 13, NASA released a new color map-projected view of Ceres, obtained by the Dawn spacecraft during its initial approach to the dwarf planet in March 2015. The map suggests that Ceres was once active, with processes that resulted in different materials in different regions.