Collect call from E.T. Do you accept the charges?

Odds are there’s intelligent life out there somewhere among the stars. Why haven’t we heard from an alien civilization? One viewpoint, in this article. What do YOU think? 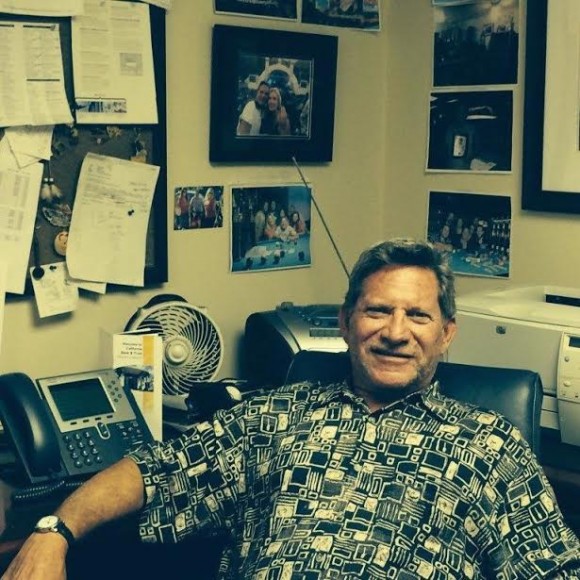 Andrew P. Fain writes frequently about the Search for ExtraTerrestrial Intelligence (SETI). He has had articles published in The Planetary Society, America Space.com, O.C Register, UFO Digest, Weirdwarp, Open Minds, Fate magazine and others. He lives in Huntington Beach, California. The view expressed in this article are his alone and do not necessarily reflect the views of EarthSky editors. What are your thoughts about SETI? Tell us in the comments below.

How many times have you watched Close Encounters of the Third Kind, or Independence Day and wondered if what happened in those films could ever really occur?

Well, that day may be getting closer as things start to get interesting in the search for extraterrestrial life.

A recent discovery proves that as much as 50 percent of the water on our planet predates the sun. Not only does this indicate water is more prevalent than we thought, it also means that many more worlds throughout our galaxy probably have habitats conducive to life. In our own solar system, even worlds like Jupiter’s moon Europa, and Saturn’s moons Enceladus and Titan, may host some form of life. This means the so called habitable zones – the specific orbits around stars, for example, at Earth’s distance from our sun – are no longer the only places where life can get started. These small moons don’t get all their energy from the sun. They also get energy from the gravitational push and pull of their host planets. Conceivably, there could be as many as a billion worlds in our galaxy with living things on them.

When speaking of technically advanced civilizations though, those numbers change dramatically. To evolve beyond one-celled organisms takes an extraordinary set of circumstances and an equal dose of luck. The number of starts and stops for life on a distant world probably outnumber all the grains of sand on a large California beach. If however, just a tiny fraction of those worlds with life develop into societies able to communicate, there could be at least 2,000 in our galaxy alone.

So, why in the 54 years since SETI began searching for extraterrestrial radio signals, haven’t we heard a thing?

First, the majority of stars in our galaxy are much older than ours and very far away. A signal from a distant civilization might arrive tomorrow or 100 years from now. When you compare the 4.5 billion years our planet has been around to the almost 15 billion years the universe has been in existence, our 54 years of searching for intelligent civilizations beyond Earth doesn’t amount to much. In fact, it equals about a hundredth of a second on a 24-hour clock.

Also, advanced extraterrestrial societies have probably evolved far beyond radio communications by now. Recognizing signals from them might be comparable to a primitive tribe deep in the jungle listening for evidence of a larger world unable to pick up vast amounts of information from the Internet flying all around them. Even a radio signal from a civilization only slightly more advanced than us would be difficult to pick up. You’d have to be at the right frequency at the right time and be very lucky.

Imagine reading in a newspaper about an upcoming television preview you’ve been waiting to see. The article however, neglects to list the day, time or channel it will appear. In a world where cable television may carry over two hundred channels, the odds of finding it are almost impossible.

To decrease those odds, scientists theorized that a good place to look for extraterrestrial signals would be at a particular “place” along the electromagnetic spectrum, which they call the waterhole. A waterhole on Earth is a place where all species gather to drink. An equivalent “place” along the radio spectrum would be that lying between emissions of hydrogen and hydroxyl. Why? Because, on Earth, water is necessary to life. Combine hydrogen and hydroxyl, and you’ve got a water molecule. This combination isn’t peculiar to Earth; it would be true throughout space. Thus the waterhole in the radio spectrum has seemed like a logical place to find an extraterrestrial signal. It also happens to be an area where terrestrial communications are prohibited, which makes it very quiet.

Still, SETI has yet to come up with any confirmed hits.

The endless listening has occasionally been interrupted by signals that got pulses racing but then turned out to be nothing.

But not all of them. 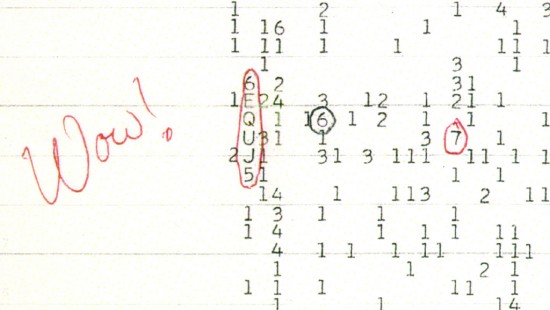 On an August night in 1977, the Big Ear Radio Telescope at the University of Ohio picked up a strong narrow beam signal sent from somewhere in the constellation Sagittarius. The signal lasted for 72 seconds. It appeared at the frequency that scientists had expected aliens might use and looked so much like an extraterrestrial signal that the lead researcher wrote and circled “Wow” by the numbers. The Wow signal has become so well known that in addition to numerous articles and blogs, a book was written about it. There is also a large selection of Wow shirts that can be bought on the Internet. It is still considered by many to be the best candidate for an extraterrestrial radio signal ever discovered.

And there have been others. Not as famous as the Wow signal, but unexplained nevertheless.

In March of 2003, SETI@home picked up a signal labelled SHGb02+14a with a source somewhere between the constellations Pisces and Aries. It was observed three times at a frequency of 1420 MHz which is right in the waterhole.

In 2010 SETI picked up a strong narrow band signal that lasted 10 seconds. It originated from a star very similar to ours, potentially habitable and about 100 light-years away. Once again, it appeared exactly where scientists predicted a signal might be found, and it exhibited all the characteristics they expected an extraterrestrial signal to have.

No one has ever come up with an adequate explanation of what these signals were, and, despite numerous attempts to reacquire them, they never repeated themselves. Had they, our world would have changed dramatically.

Perhaps they were the alien equivalent of one time bursts of radar like we use to probe the moon, or a snippet of a ship to ship communication that happened to briefly align with Earth before moving on. They could also have been part of a radio beacon sweeping past us like a lighthouse beam and we were lucky enough just to catch a piece before it passed by or switched off.

We don’t have enough time or funds to sit on one wavelength 24 hours a day and 365 days a year. It is conceivable, those signals may have repeated in the years since their initial discovery, but we happened to be listening to other frequencies at the time.

A few have asked should we be doing more than just listening?

Beaming radio signals to the stars is called Active SETI and it has become a controversial subject. Michael Michaud, former member of the SETI Permanent Group says that sending out a strong SETI signal could be dangerous. It might bring us to the attention of an advanced civilization that had not previously known of our existence. We cannot assume that such a civilization would be benign.

Biologist Michael Archer states that any creature we contact also had to claw its way up the evolutionary ladder and will be every bit as nasty as we are, if not more. Others go even further by saying that extraterrestrials will probably show innate contempt for human beings and a civilization that blurts out its existence would be like early humans descending from trees and saying “here kitty” to a sabre toothed tiger.

If they are right, that would probably explain the lack of repetitive signals. There could be predators around those waterholes. Aliens would surely subscribe to the same notion which means nobody would be broadcasting anything.

So, why listen if civilizations are silent, worrying about some Evil Empire turning their society into dust?

Our business as scientists is to search the universe and find out what is there. What is there may conform to our moral sense or it may not. It is just as unscientific to impute to remote intelligences wisdom and serenity as it is to impute to them irrational and murderous impulses. We must be prepared for either possibility and conduct our searches accordingly.

A scientist friend used to tell a joke that had its roots from an episode of The Twilight Zone:

Two different malnourished aliens walked into the UN carrying papers stating they wanted to serve mankind. When asked why, alien #1 says that he wants to grind us up and use the pieces as food to feed his race. Alien #2 responds by saying that he wants to do whatever he can to bring peace and prosperity to the human race. The Secretary General of the UN is asked by a subordinate which one they should embrace and he replies, “definitely #1. Never trust a liar.”

Seth Shostak, chief astronomer for SETI says that we can no better guess the motivation of alien intelligence than goldfish can guess ours.

On the other hand, the late astronomer Carl Sagan believed that civilizations advanced enough to survive self annihilation had probably long ago overcome their violent tendencies and would be more like cosmic ambassadors.

Within 20 years we should start getting some answers. As telescopes get more sophisticated, not only will we probably discover life within our solar system, we should be able to find the bio-signatures of life on exoplanets and may have even detected an extraterrestrial signal.

Actual contact would probably be not far down the road from there.

There are two possibilities. Either we are alone in the universe or we are not. Both are equally terrifying.

I think finding out we are alone would be a lot more frightening.

But that’s not going to happen, because they’re out there.

I just hope they are more like Close Encounters than Independence Day! 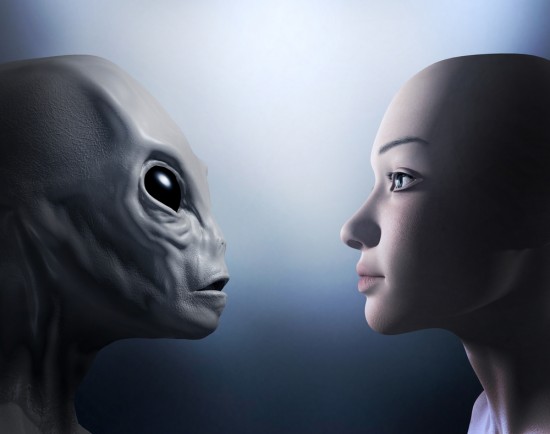 Will we someday meet beings from another world? Image via Shutterstock

Bottom line: The odds suggest there’s intelligent life out there somewhere among the stars. Why haven’t we heard yet from an alien civilization? Here’s one viewpoint. What do you think?