The distant exoplanets known as “hot Jupiters” orbit their stars so tightly that they’re perpetually charbroiled. Plus they keep one face toward their stars. 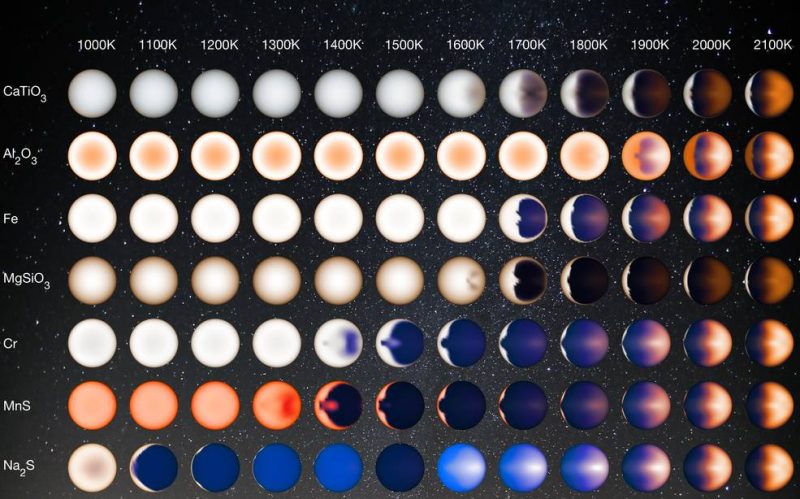 This illustration represents how hot Jupiters of different temperatures and different cloud compositions might appear to a person flying over the dayside of these planets on a spaceship, based on computer modeling. Image via NASA/JPL-Caltech/University of Arizona/V. Parmentier

The weather forecast on a “hot Jupiter” might go something like this: Cloudy nights and sunny days, with a high of 2,400 degrees Fahrenheit (about 1,300 degrees C). That’s according to a study, published in the Astrophysical Journal, which used NASA’s Kepler space telescope and computer modeling to learn about the atmospheres of these mysterious worlds.

Hot Jupiters are among the thousands of exoplanets (planets outside our solar system) discovered in our Milky Way galaxy so far. Hot Jupiters orbit their stars so tightly that they are perpetually charbroiled. A hot Jupiter’s year – the time the planet takes to whip once around its star – can be only a few Earth days long. Hot Jupiters are tidally locked, meaning one side of the planet always faces its sun and the other is in permanent darkness. In most cases, according to the study, the “dayside” would be largely cloud-free and the “nightside” heavily clouded, leaving partly cloudy skies for the zone in between. The study results also indicate that clouds are not evenly distributed on hot Jupiters, which suggests that different parts of hot Jupiters have vastly different temperatures.

Vivien Parmentier, a NASA Sagan Fellow and postdoctoral researcher at the University of Arizona, Tucson, was the lead author of the study. She said in a statement:

The cloud formation is very different from what we know in the solar system.

By combining Kepler data with computer models, scientists were able to infer global cloud patterns on these distant worlds, and that allowed the team to draw conclusions about wind and temperature differences on the hot Jupiters they studied. By figuring out how clouds are distributed, which is intimately tied to the planet’s overall temperature, scientists were then able to determine what the clouds were probably made of. [Read more about how they did the study.]

The study suggests that hot Jupiters are far too hot for water-vapor clouds like the clouds here on Earth. Instead, clouds on these planets are likely formed as exotic vapors condense to form minerals, chemical compounds such as aluminum oxide, or even metals, such as iron. According to the study:

Manganese sulfide clouds probably dominate on “cooler” hot Jupiters, while silicate clouds prevail at higher temperatures. On these planets, the silicates likely rain out into the planet’s interior, vanishing from the observable atmosphere.

Bottom line: A study published in the Astrophysical Journal in August 2016 looks at the extreme weather conditions on hot Jupiters.

Read more about the study from NASA