An international team of astronomers sight huge clouds of gas orbiting supermassive black holes at the centers of galaxies. Watch a video depicting the swirling clouds.

Astronomers see huge clouds of gas orbiting supermassive black holes at the centers of galaxies. Once thought to be a relatively uniform, fog-like ring, the accreting matter instead forms clumps dense enough to intermittently dim the intense radiation blazing forth as these enormous objects condense and consume matter.

The international team reports their sightings in a paper to be published in the Monthly Notices of the Royal Astronomical Society, available online now.

Evidence for the clouds comes from records collected over 16 years by NASA’s Rossi X-ray Timing Explorer, a satellite in low-earth orbit equipped with instruments that measured variations in X-ray sources. Those sources include active galactic nuclei, brilliantly luminous objects powered by supermassive black holes as they gather and condense huge quantities of dust and gas.

By sifting through records for 55 active galactic nuclei Alex Markowitz, an astrophysicist at the University of California, San Diego and the Karl Remeis Observatory in Bamberg, Germany, and his colleagues found a dozen instances when the X-ray signal dimmed for periods of time ranging from hours to years, presumably when a cloud of dense gas passed between the source and satellite. 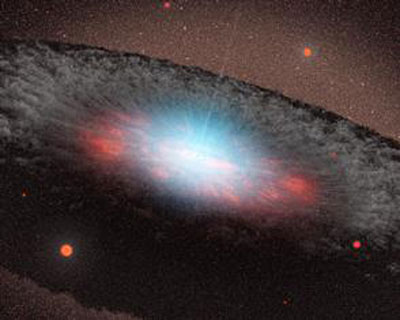 Artist’s concept of a massive black hole at the center of a galaxy. Image credit: NASA/JPL/Caltech

Mirko Krumpe of the European Southern Observatory in Garching, Germany and Robert Nikutta, of Andrés Bello University in Santiago, Chile co-authored the report, which confirms what recent models of these systems have predicted.

The clouds they observed orbit a few light-weeks to a few light-years from the centre of the active galactic nuclei. One, in a spiral galaxy in the direction of the constellation Centaurus designated NGC 3783, appeared to be in the midst of being torn apart by tidal forces.