Scientists had suspected that mountains on Venus affected weather patterns seen rippling across Venus’ cloudtops. A new study provides evidence of this connection. 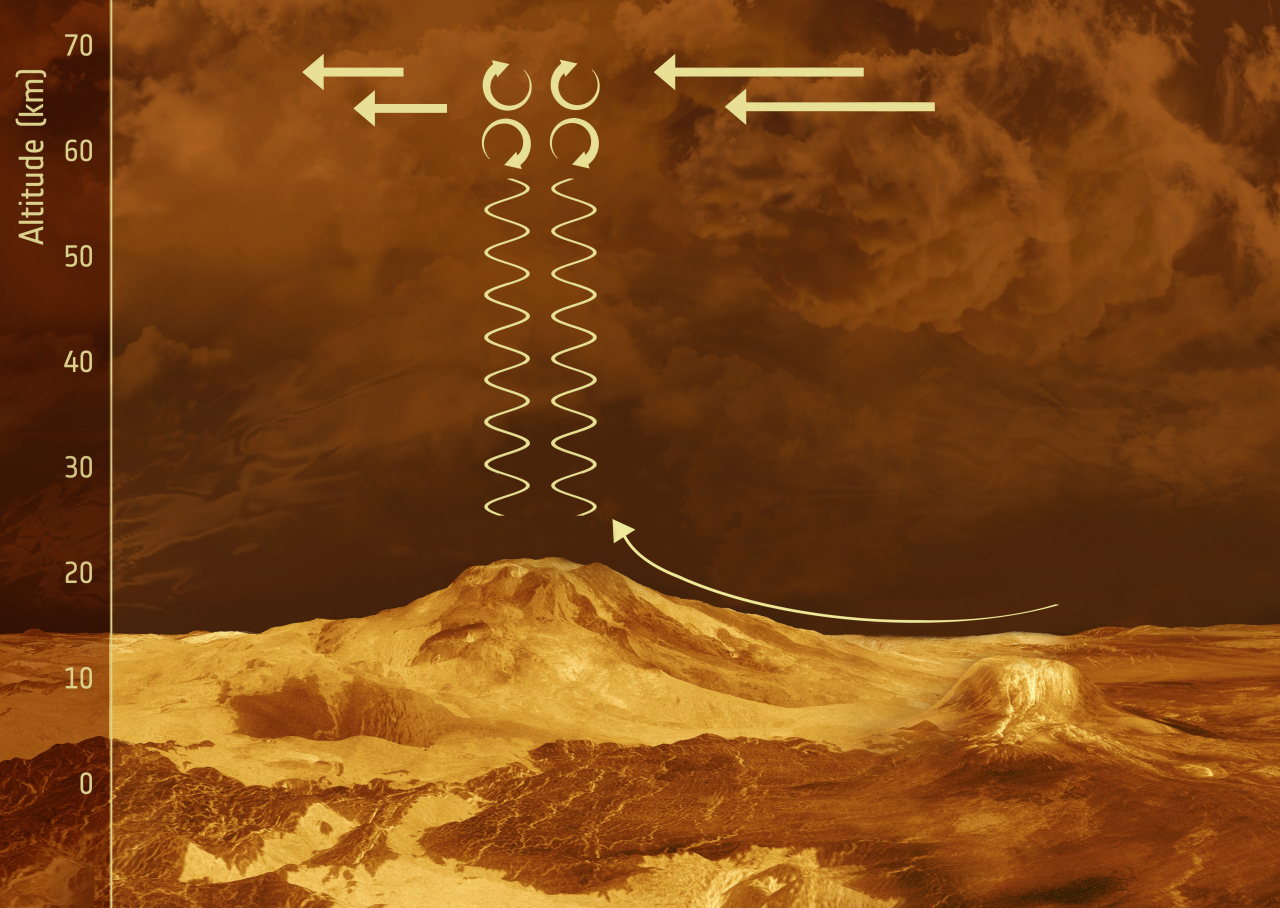 Artist’s concept of the proposed behavior of gravity waves in the vicinity of mountains on Venus, via ESA.

Venus is Earth’s twin in size, but its surface features are perpetually hidden below clouds. What little we know about Venus’ surface comes mainly from radar studies. This week, though (July 18, 2016), the European Space Agency (ESA) said that – rather than acting as a barrier – Venus’ clouds can also offer insights into what lies on the surface. ESA described a study by scientists using data from the Venus Express spacecraft. These scientists were able to show, for the first time, how Venus’ weather patterns are directly linked to its surface topography. For part of their study, they used what are called gravity waves (not to be confused with gravitational waves), generated as winds push their way slowly across mountain slopes hidden beneath Venus’ clouds.

The scientists explored three aspects of Venus’ weather: how quickly winds circulate, how much water is locked up in Venus’ clouds, and how bright these clouds are across the spectrum (specifically in ultraviolet light).

Our results showed that all of these aspects – the winds, the water content, and the cloud composition – are somehow connected to the properties of Venus’ surface itself. 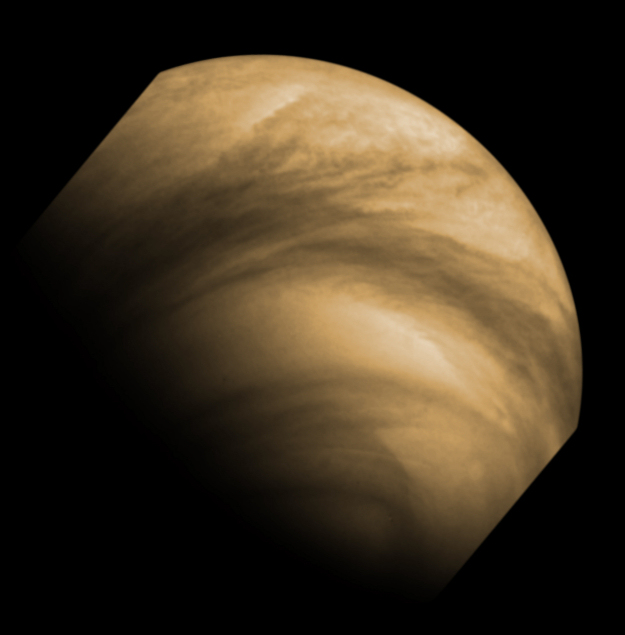 The scientists found that an area of clouds near Venus’ equator is hoarding more water vapor than other parts of the atmosphere. This part of Venus’ atmosphere is located above a mountain range on Venus that earthly scientists call Aphrodite Terra, one of two large elevated regions on Venus.

Aphrodite Terra is comparable in size to the continent of Africa. It’s 14,700 feet (4,500 meters) high at its highest.

It appears that water-rich air from the lower atmosphere is being forced upwards above the mountains of Aphrodite Terra. Researchers have nicknamed this atmospheric feature the “fountain of Aphrodite.”

Wojciech Markiewicz of the Max-Planck Institute for Solar System Research in Göttingen, Germany, is a co-author on the new study. He said:

This ‘fountain’ was locked up within a swirl of clouds that were flowing downstream, moving from east to west across Venus.

Our first question was, ‘Why?’ Why is all this water locked up in this one spot? 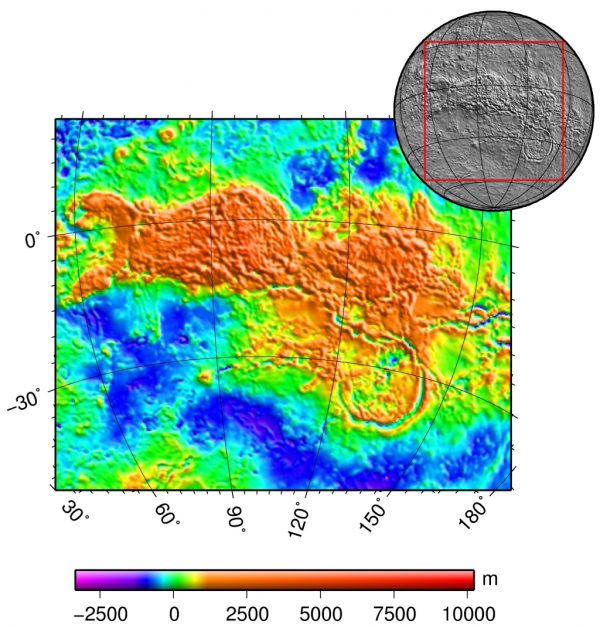 When winds push their way slowly across the mountainous slopes on the surface they generate … gravity waves. Despite the name, these have nothing to do with gravitational waves, which are ripples in space-time.

Instead, gravity waves are an atmospheric phenomenon we often see in mountainous parts of Earth’s surface. Crudely speaking, they form when air ripples over bumpy surfaces. The waves then propagate vertically upwards, growing larger and larger in amplitude until they break just below the cloud-top, like sea waves on a shoreline.

As the waves break, they push back against the fast-moving high-altitude winds and slow them down, meaning that winds above Venus’ Aphrodite highlands are persistently slower than elsewhere.

Downstream of Aphrodite Terra, though, these winds re-accelerate to their usual speeds. The scientists described this motion as an air pump. That is, the wind circulation creates an upwards motion in Venus’ atmosphere that carries water-rich air up from below the cloud-tops, bringing it to the surface of the cloud layer and creating both the observed ‘fountain’ and the extended downwind plume of vapor.

Håkan Svedhem, ESA Project Scientist for Venus Express, explained why this result is so important. He said:

While our models do acknowledge a connection between topography and climate, they don’t usually produce persistent weather patterns connected to topographical surface features. This is the first time that this connection has been shown clearly on Venus. It’s a major result.

This study was published on June 30, 2016 in in the Journal of Geophysical Research: Planets. 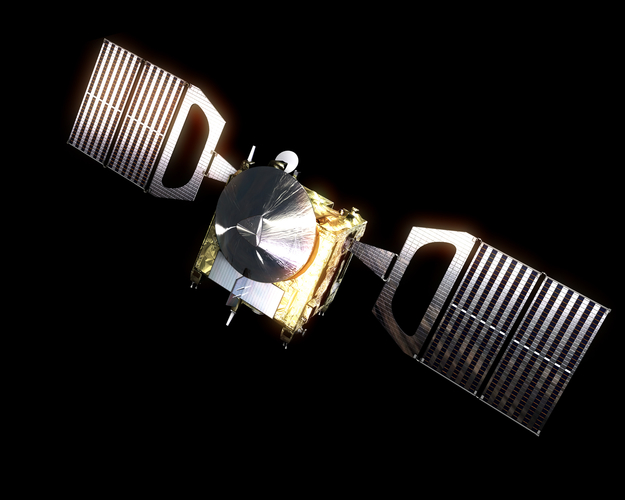 Artist’s concept of Venus Express spacecraft, via ESA. It studied Venus from orbit from 2006 to 2014.

Bottom line: Scientists have used Venus Express data to show a connection between a topographic feature on Venus and patterns of winds and water vapor in its atmosphere.