Analysis of the supernova discovered last month is suggesting to Berkeley scientists that what we think of as ‘normal’ supernovae behavior is actually unusual. 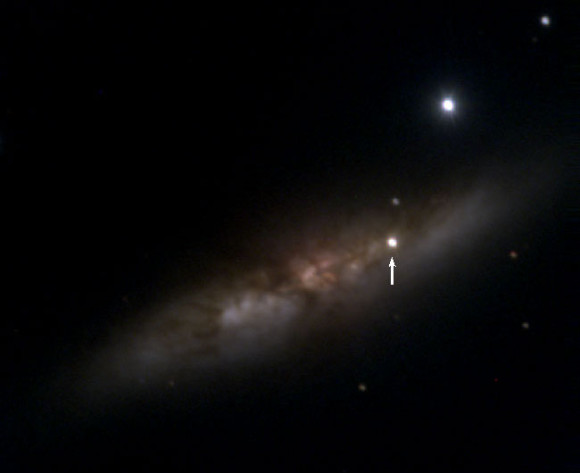 A color composite of SN 2014J, located in the “cigar galaxy” M82, 11.4 million light years away, made from KAIT images obtained through several different filters. The supernova is marked with an arrow. Other round objects are relatively nearby stars in our own Milky Way Galaxy. Image credit: W. Zheng and A. Filippenko, UC Berkeley.

A bright supernova discovered only six weeks ago in a nearby galaxy is provoking new questions about the exploding stars that scientists use as their main yardstick for measuring the universe.

Called SN 2014J, the glowing supernova was discovered by a professor and his students in the United Kingdom on January 21, about a week after the stellar explosion first became visible as a pinprick of light in its galaxy, M82, 11.4 million light years away in the Big Dipper. Still visible today through small telescopes, it is the brightest supernova seen from Earth since SN1987A, 27 years ago, and may be the closest Type Ia supernova – the kind used to measure cosmic distances – in more than 77 years.

When University of California, Berkeley, astronomer Alex Filippenko’s research team looked for the supernova in data collected by the Katzman Automatic Imaging Telescope (KAIT) at Lick Observatory near San Jose, Calif., they discovered that the robotic telescope had actually taken a photo of it 37 hours after it appeared, unnoticed, on Jan. 14.

Combining this observation with another chance observation by a Japanese amateur astronomer, Filippenko’s team was able to calculate that SN 2014J had unusual characteristics – it brightened faster than expected for a Type Ia supernova and, even more intriguing, it exhibited the same unexpected, rapid brightening as another supernova that KAIT discovered and imaged last year – SN 2013dy.

“Now, two of the three most recent and best-observed Type Ia supernovae are weird, giving us new clues to how stars explode,” said Filippenko, referring to a third, though apparently ‘normal,’ Type Ia supernova, SN 2011fe, discovered three years ago. “This may be teaching us something general about Type Ia supernovae that theorists need to understand. Maybe what we think of as ‘normal’ behavior for these supernovae is actually unusual, and this weird behavior is the new normal.”

A paper describing the SN 2014J observations – the first published on this newly discovered supernova – was posted online this week by The Astrophysical Journal Letters and will appear in the March 1 print issue.

Astronomers noticed decades ago that Type Ia supernovae explode with about the same brightness, no matter where they are in the universe. This makes them good “standard candles” with which to judge distance. In the 1990s, two teams (both of them included Filippenko) used Type Ia supernovae to determine the distances to galaxies, compared distance with velocity and discovered that the universe is expanding faster and faster, rather than slowing down as expected. The teams’ leaders, including UC Berkeley astrophysicist Saul Perlmutter, shared the 2011 Nobel Prize in Physics for this discovery.

While the latest discoveries do not contradict these results, refinements in understanding Type Ia explosions could help improve distance measurements and lead to more precise calculations of the expansion rate of the universe, thereby setting constraints on the nature of “dark energy,” a still mysterious energy comprising 70 percent of the universe and thought to be responsible for its acceleration.

The new data also provide information about the physics occurring in the core of the explosion.

A Type Ia supernova is thought to be the explosion of a white dwarf – an old and very dense star that has shrunk from the size of the sun to the size of Earth. When a white dwarf has a stellar companion, it can sometimes gain matter from it until the white dwarf becomes unstable, completely obliterating itself through a gigantic nuclear explosion.

Because of the importance of supernovae in measuring the universe, many new telescopes, such as the Palomar Transient Factor in San Diego County and the Pan-STARRS in Hawaii, continually rescan the sky to discover more of them. The KAIT telescope has a smaller field of view than newer ones do, so Filippenko’s team has switched its focus to discovering supernovae earlier: it scans the same patches of sky every night or every other night. The sooner a new explosion is discovered, the sooner astronomers can capture information, such as spectra showing how the supernova brightens in different colors or wavelengths.

Last year, for example, KAIT and Filippenko’s Lick Observatory Supernova Search (LOSS) team discovered and photographed SN 2013dy within two and a half hours of its appearance, earlier than for any other Type Ia. KAIT, which is operated by postdoctoral scholar WeiKang Zheng, is programmed to automatically take images of likely supernovae in five different wavelength bands, and in 2012 captured one supernova, SN 2012cg, three minutes after its discovery.

“Very, very early observations give us the most stringent constraints on what the star’s behavior really is in the first stages of the explosion, rather than just relying on theoretical speculation or extrapolating back from observations at later times, which is like observing adolescents to understand early childhood,” Filippenko said.

Via University of California, Berkeley