Only 1,000 light-years away, the star system can be seen with the unaided eye. 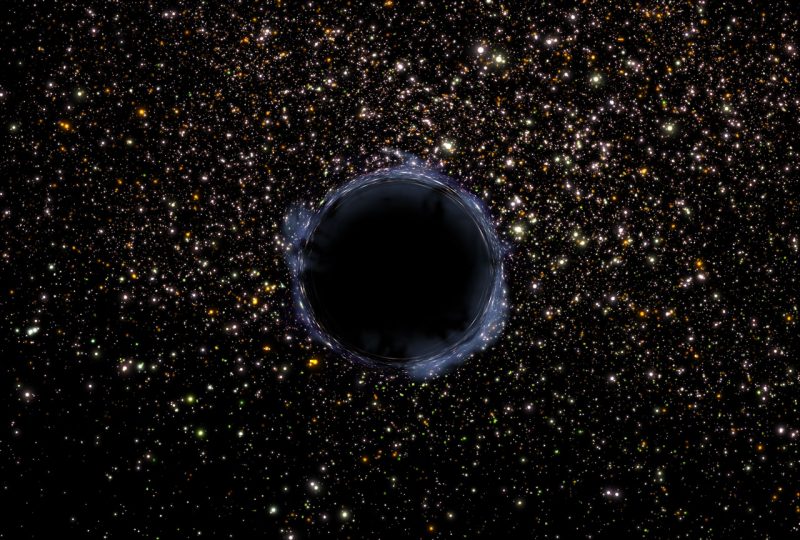 Artist’s concept of a black hole via ESO.

Originally published on May 6, 2020, by the European Southern Observatory.

A team of astronomers from the European Southern Observatory (ESO) and other institutes has discovered a black hole lying just 1,000 light-years from Earth. The black hole is closer to our solar system than any other found to date and forms part of a triple system that can be seen with the unaided eye. The team found evidence for the invisible object by tracking its two companion stars using the 2.2-meter telescope at ESO’s La Silla Observatory in Chile. They say this system could just be the tip of the iceberg, as many more similar black holes could be found in the future.

Prior to this discovery, the closest-known black hole was A0620-00 in the constellation of Monoceros at a distance of 3,000 light years.

Petr Hadrava of the Academy of Sciences of the Czech Republic in Prague, a co-author of the research, said:

We were totally surprised when we realized that this is the first stellar system with a black hole that can be seen with the unaided eye.

Located in the constellation of Telescopium, the system is so close to us that its stars can be viewed from the Southern Hemisphere on a dark, clear night without binoculars or a telescope.

This system contains the nearest black hole to Earth that we know of. 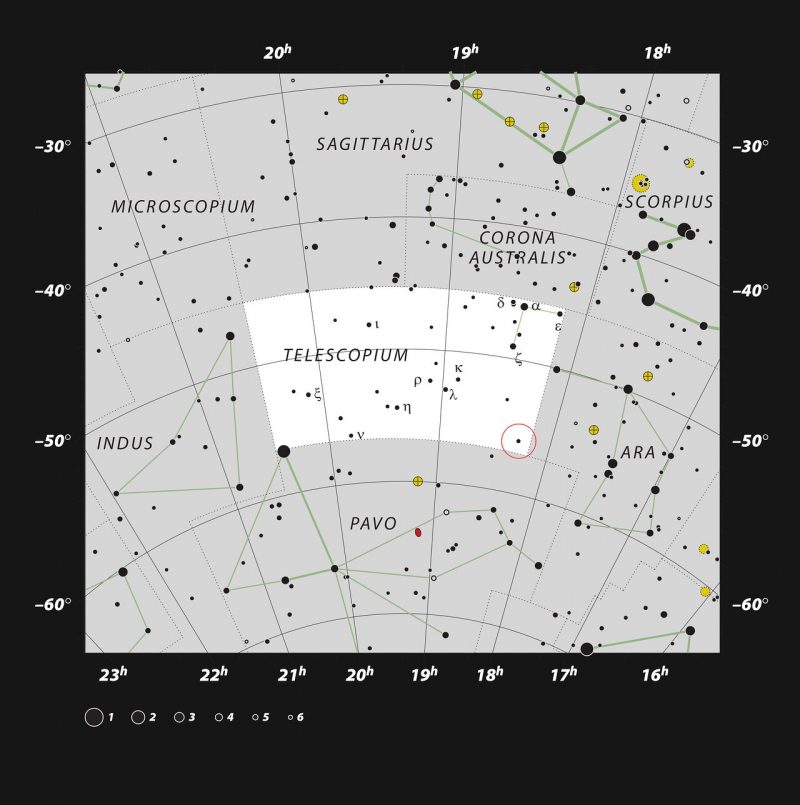 This chart shows the location of the HR 6819 triple system, which includes the closest black hole to Earth, in the constellation of Telescopium. This map shows most of the stars visible to the unaided eye under good conditions and the system itself is marked with a red circle. While the black hole is invisible, the two stars in HR 6819 can be viewed from the Southern Hemisphere on a dark, clear night without binoculars or a telescope. Image via ESO/ IAU/ Sky & Telescope.

The team originally observed the system, called HR 6819, as part of a study of double-star systems. However, as they analyzed their observations, they were stunned when they revealed a third, previously undiscovered body in HR 6819: a black hole. The observations with the FEROS spectrograph on the 2.2-meter telescope at La Silla showed that one of the two visible stars orbits an unseen object every 40 days, while the second star is at a large distance from this inner pair.

Dietrich Baade of ESO in Garching and co-author of the study, said:

The hidden black hole in HR 6819 is one of the very first stellar-mass black holes found that do not interact violently with their environment and, therefore, appear truly black. But the team could spot its presence and calculate its mass by studying the orbit of the star in the inner pair. Rivinius, who is based in Chile, commented:

An invisible object with a mass at least 4 times that of the sun can only be a black hole.

Astronomers have spotted only a couple of dozen black holes in our galaxy to date, nearly all of which strongly interact with their environment and make their presence known by releasing powerful X-rays in this interaction. But scientists estimate that, over the Milky Way’s lifetime, many more stars collapsed into black holes as they ended their lives. The discovery of a silent, invisible black hole in HR 6819 provides clues about where the many hidden black holes in the Milky Way might be. Rivinius explained:

There must be hundreds of millions of black holes out there, but we know about only very few. Knowing what to look for should put us in a better position to find them.

Baade added that finding a black hole in a triple system so close by indicates that we are seeing just “the tip of an exciting iceberg.”

Already, astronomers believe their discovery could shine some light on a second system. Marianne Heida, a postdoctoral fellow at ESO and co-author of the paper, said:

We realized that another system, called LB-1, may also be such a triple, though we’d need more observations to say for sure. LB-1 is a bit further away from Earth but still pretty close in astronomical terms, so that means that probably many more of these systems exist. By finding and studying them we can learn a lot about the formation and evolution of those rare stars that begin their lives with more than about 8 times the mass of the sun and end them in a supernova explosion that leaves behind a black hole.

The discoveries of these triple systems with an inner pair and a distant star could also provide clues about the violent cosmic mergers that release gravitational waves powerful enough to be detected on Earth. Some astronomers believe that the mergers can happen in systems with a similar configuration to HR 6819 or LB-1, but where the inner pair is made up of two black holes or of a black hole and a neutron star. The distant outer object can gravitationally impact the inner pair in such a way that it triggers a merger and the release of gravitational waves. Although HR 6819 and LB-1 have only one black hole and no neutron stars, these systems could help scientists understand how stellar collisions can happen in triple star systems.

Source: A naked-eye triple system with a nonaccreting black hole in the inner binary