Near-Earth asteroid 2003 SD220 will pass safely, at more than 28 times the moon’s distance, on Christmas Eve. Will it cause earthquakes? Of course not. 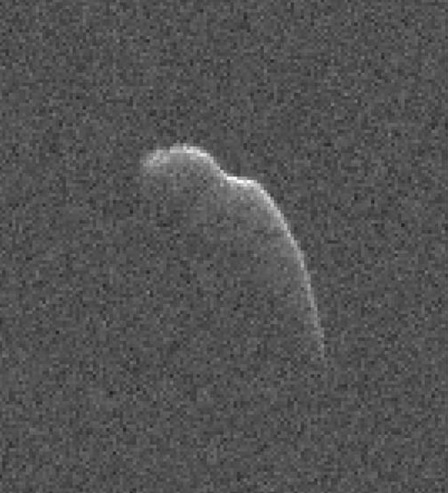 Scientists using NASA’s 230-foot (70-meter) Deep Space Network antenna at Goldstone, California captured this image of asteroid 2003 SD220 on December 17, when it was about 7.3 million miles (12 million km) from Earth. Image via NASA/JPL-Caltech/GSSR

This month, astronomers have been observing a large asteroid approaching the Earth-moon system. Near-Earth asteroid 163899 – also known as 2003 SD220 – will come closest to Earth on Christmas Eve (December 24, 2015). At that time, it’ll be about 28 times the distance to Earth’s moon; in other words, it’s not coming particularly close. Don’t believe any media suggesting that this space rock may cause earthquakes. Those assertions are misleading and incorrect. Even if 2003 SD220 were passing closer, it’s doubtful earthquakes would result. There’s no scientific evidence that an asteroid’s flyby can cause seismic activity, unless the asteroid collides with Earth. In this case, that clearly will not happen.

Scientists have been watching this asteroid this month because they knew about its Christmas Eve closest approach well in advance. Thus the asteroid was included in observing schedules for various observatories. The NASA Jet Propulsion Laboratory’s Goldstone Solar System Radar and the National Radio Astronomy Observatory’s Green Bank Telescope and Very Long Baseline Array conducted observations of 2003 SD220, as did the NASA-funded planetary radar system at Arecibo Observatory in Puerto Rico.

A notable feature of this asteroid is its elongated shape and large size. Astronomer Edgar Rivera-Valentin from Arecibo Observatory – the largest and most sensitive single dish radio telescope in the world – told EarthSky:

We were able to observe this asteroid (with radar) for more days from Arecibo and we still estimate SD220 is about 1.25 miles (2 km) long.

The asteroid is now also known to rotate very slowly, taking more than 11 days to complete one full rotation. 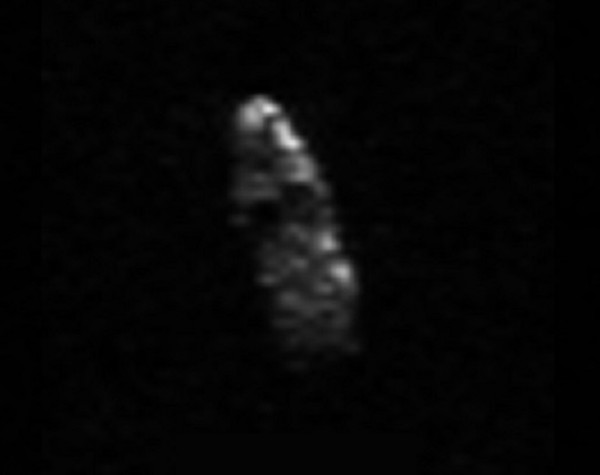 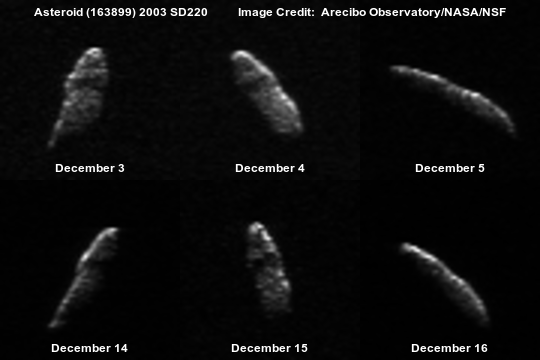 Because it comes close to Earth, it is of interest to NASA as a possible future robotic or human mission target.

Data from all of the various observations are used to determine the asteroid’s shape, rotation, and surface properties as well as allow for refinement of the asteroid’s orbit, which can be used to better assess its future impact hazard. A December 23 statement from Arecibo pointed out:

This year’s close approach is the first of five predicted encounters between Earth and 2003 SD220 in the next 12 years. High-precision measurements now will help better prepare for future passes.

The path of asteroid 2003 SD220 through our solar system. Image via NASA

At the 2015 pass – at its closest – asteroid 2003 SD220 will be some 6,787,600 miles (11 million km) from our planet’s surface. That’s more than 28 times the Earth-moon distance. It’s so far away that only professional and advanced amateur astronomers are likely to capture optical images of this space rock.

The Christmas Eve asteroid will be much more difficult to see because of its distance. 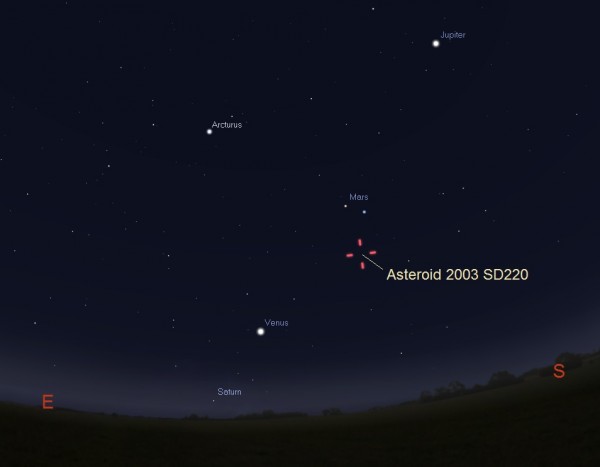 View larger. | Illustration showing location of asteroid 2003 SD220 on the sky, 30 to 45 minutes before sunrise on December 25, 2015. Chart is looking in the general direction of sunrise, before dawn. No, the asteroid will not be visible to the unaided eye or though small telescopes. However, advanced amateurs using 12″ and bigger telescopes may capture optical images of the asteroid. Illustration by Eddie Irizarry, using Stellarium.

This space rock – whose shape can be compared to a chicken tender – will make its approach to Earth on December 24, 2015 but will return again next in 2018.

NASA has verified that the space rock will not pass at any dangerous distance during the next two centuries.

By the way, asteroid 2003 SD220 is not the only big asteroid passing by Earth on this month. Asteroid 2008 CM, a space rock with a diameter of 1.5 km, will safely pass our planet on December 29 at more than 22 times the Earth-moon distance. 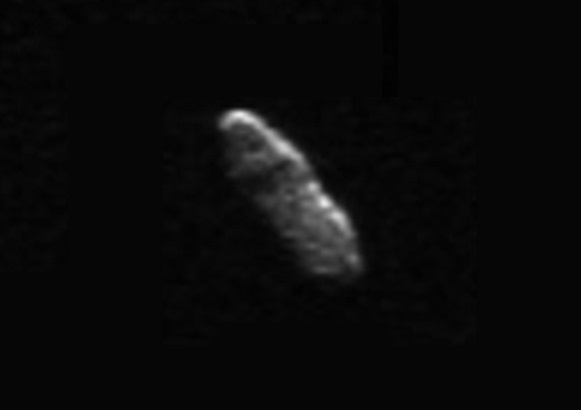 Bottom line: Asteroid 163899 – aka 2003 SD220 – will pass safely, at more than 28 times the Earth-moon distance, on December 24, 2015. This Christmas Eve asteroid will pass too far away to be visible in small amateur telescopes. Media reports suggesting that this space rock may cause earthquakes are misleading and incorrect.