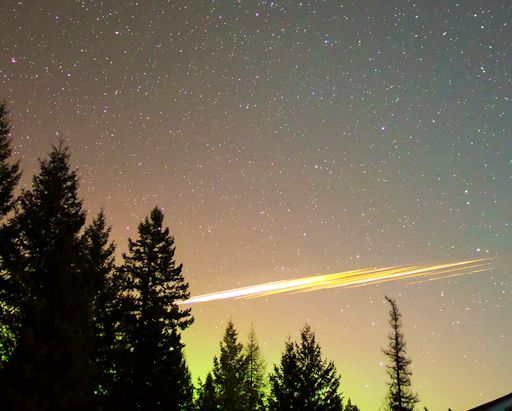 Donny Mott photographed the glowing debris from Spirit Lake, Idaho. The green glow in the treetops is an aurora.

Monday night (February 23-24, 2015), observers across the western half of North America witnessed a cluster of bright lights slowly moving south to north across the dark night sky. Some mistook it for a meteor, but it was the re-entry and disintegration of a Chinese rocket body, specifically stage 3 of the CZ-4B rocket that launched the Yaogan Weixing 26 satellite in December, 2014. Coincidentally, a geomagnetic storm was in progress at the time, and lucky photographers caught the rocket’s debris cutting across curtains of northern lights. 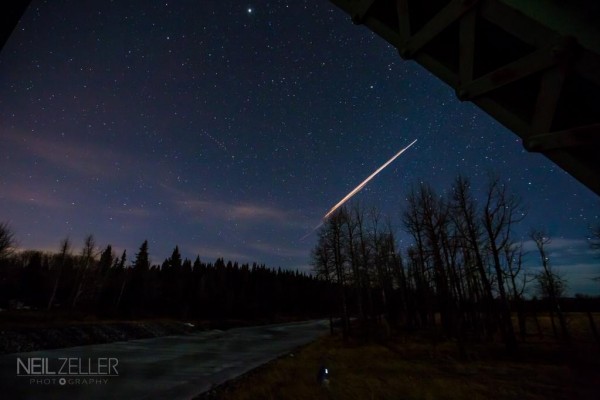 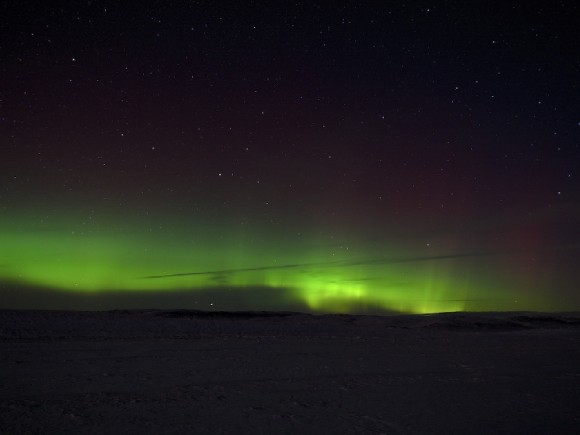 John Arnold near Craig, Montana captured this photo of the February 23-24 event. He said, “It was moving so slow that I had time to wait for NR (40 sec total) and take another as it burned over the Bob Marshall Wilderness. Incredible luck. And the aurora was great by Montana standards.” 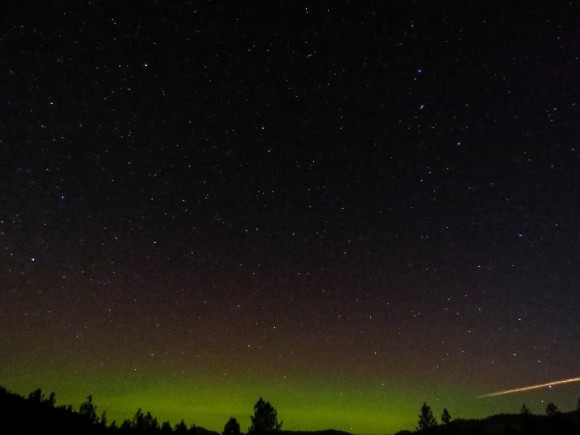 Photographer Rocky Raybell, in Keller, Washington also caught it. He said, “I was taking pics of the aurora to the north when I noticed what appeared to be a band of light to my east heading in a northerly direction.”

… over 145 reports from western states last night (February, 23th 2015) about a slow moving grouping of fireballs traveling from the south east to the north west. Witness reports indicate, the object travelled over a 1,000 mile distance and was seen from as far south as Arizona and as far north as Alberta CA. The phenomenon was seen from Arizona, Idaho, Utah, Montana, Nevada, California, Washington, Oregon, Wyoming, Alberta and British Columbia on Tuesday, February 24, 2015 around 11:00 p.m. Mountain Time.

The most southerly observation I have noted so far was from Scottsdale, Arizona; the most northerly from Didsbury, Alberta. That spans nearly 3,000 km of the descent.

Now check out the videos below. The greatest thing about them may be the comments people are making while watching this amazing sight in the night sky. 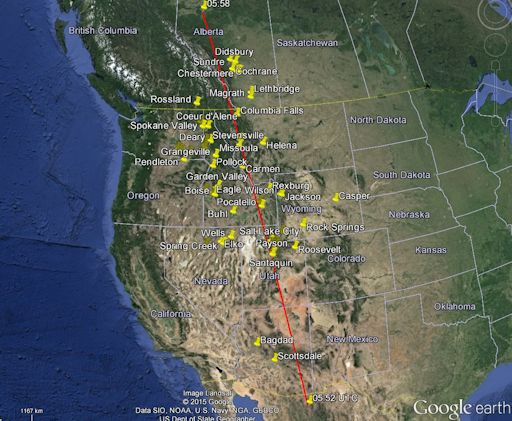 Map shows sightings along with the ground track of the decaying rocket body on February 23-24. Image via Ted Molczan

Bottom line: On the night of February 23-24, 2015, lucky observers across the western half of North America saw a cluster of bright lights slowly moving south to north across the night sky. It was the re-entry and disintegration of a Chinese rocket body, specifically stage 3 of the CZ-4B rocket that launched the Yaogan Weixing 26 satellite in December, 2014.