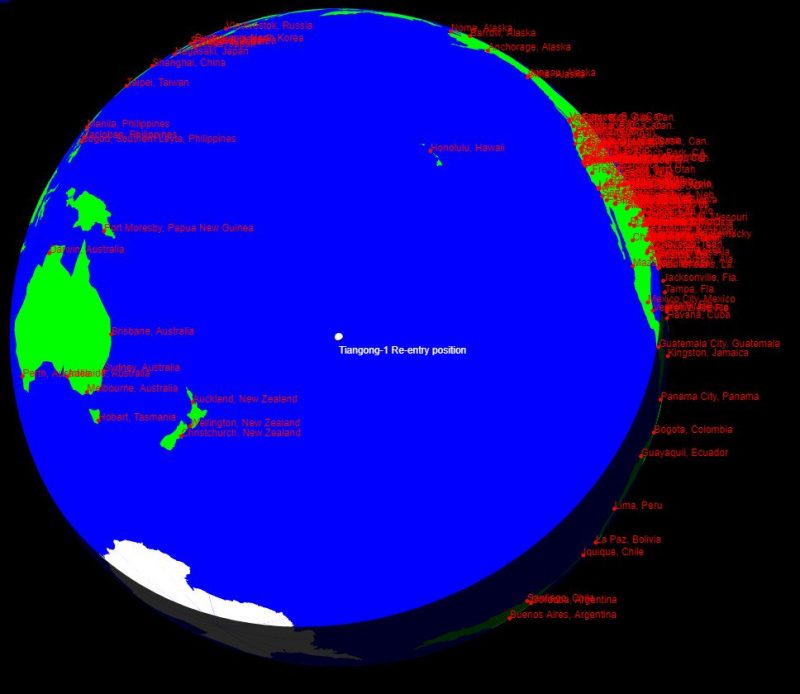 China’s first space station, Tiangong-1, reentered Earth’s atmosphere on April 2 at 00:16 UTC (April 1 at 8:16 p.m. EDT; translate UTC to your time). The reentry was over the Pacific Ocean. Did any pieces of the space station survive reentry, and did any strike land? Some pieces almost certainly survived the fall, and, at this time, we’ve heard no reports of pieces striking land.

NW of Tahiti – it managed to miss the 'spacecraft graveyard' which is further south! pic.twitter.com/Sj4e42O7Dc

In this map the final orbit of #Tiangong1 before #reentry, and the reentry location near 14 S, 164 W in the Pacific Ocean, according to the JSpOC decay message:@drspacejunk @planet4589 @SSC_NL @cosmos4u @Itzalpean pic.twitter.com/gKr4fUGbmk

So, at present, it’s unknown if any pieces will be found on land, although it seems unlikely. Space experts warn that if you think you have found a chunk of Tiangong-1, you should not pick it up or breathe in any fumes emanating from it. The space junk may be contaminated with hydrazine, a toxic rocket fuel.

Tiangong-1 was not designed to withstand reentry, as some spacecraft are. The extreme heat and friction generated by its high-speed passage through Earth’s atmosphere would have caused the spacecraft to burn up, at least mostly, over the Pacific.

Not a whole lot of commercial planes in the vicinity of the #Tiangong1 reentry. Hopefully, someone got it on video… pic.twitter.com/JfhZLFqCzp

By popular demand: the list of the almost 50 bigger-than-Tiangong objects that have fireballed their way through an uncontrolled reentry https://t.co/8vEHdBBH51

Reference: here is an illustration of Tiangong-1 by the manufacturer CAST pic.twitter.com/ElrbndsWY4

Experienced amateur sky observers also caught video of Tiangong-1 last week as it sped across our sky on its way to a fiery demise this weekend. We know of at least two who succeeded in this demanding observation. See their videos below. Brian Ottum posted his view of the space station – from early in the day on Wednesday – on Instagram:

As you may have heard, the Chinese space station Tiangong-1 will come crashing down to Earth this weekend. Here is my video of the bus-sized satellite from this morning. The camera was having trouble keeping up with Tiangong as it zoomed across the sky – you can see stars whip past. Taken March 28, 12.6UT. The space station is starting to dip into the atmosphere, 120 miles up. Friction could be starting to cause it to warm up and glow. Predictions have it burning up late Saturday night, but that could happen as early as Saturday morning or Sunday. We just don't know where or when. Chunks are likely to hit Earth, but probably the ocean. Video taken with Canon 5DmkIII, 10" F/5 reflector telescope, satellite tracking Paramount MX mount, remote control observatory located at Dark Sky New Mexico. #astro #astronomy #astronomia #astrophotography #astrophotos #APOD #cosmos #galaxy #galaxies #Hubble #longexposure #milkyway #nasa #satellite #tiangong #tiangong1 #reentry #sky #space  #stars #telescope #universe

The Virtual Telescope Project in Rome and Tenagra Observatories in Arizona provided an exciting livestream of their successful attempt to view Tiangong-1, also earlier in the day on Wednesday. Check this out! It’s really fun to hear Gianluca Masi‘s commentary as he searches for – and finds – the space station.

Tiangong-1’s major goal was to test and master technologies related to orbital rendezvous and docking. One uncrewed and two crewed missions – executed by the Shenzhou (Divine Craft) spacecraft – took place during its operational lifetime. ESA explained:

Following launch in 2011, the Tiangong-1 orbit began steadily decaying due to the faint, yet not-zero, atmospheric drag present even at 300 or 400 km altitude [about 200 to 250 miles altitude]. This affects all satellites and spacecraft in low-Earth orbit, like the International Space Station, for example. 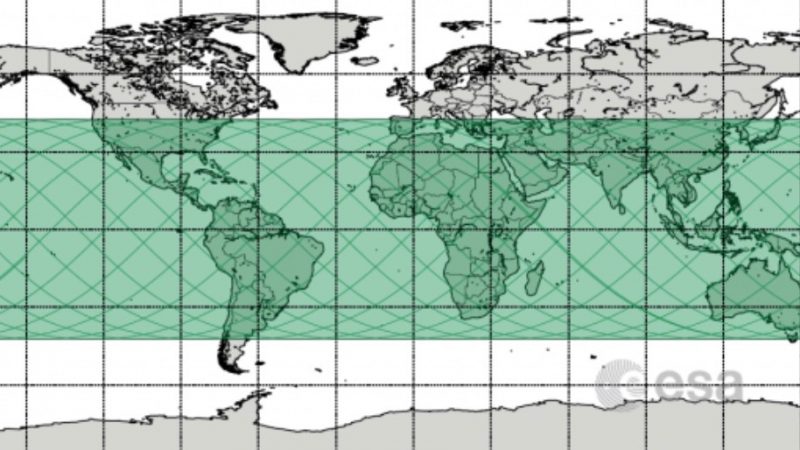 Tiangong-1 potential reentry area. Map showing the area between 42.8 degrees north and 42.8 degrees south latitude (in green), over which Tiangong-1 was predicted to reenter. Image via ESA CC BY-SA IGO 3.0.

Lessons you should take away:
1) Science isn't about predicting things precisely. It's about knowing how big your uncertainty is.
2). The Pacific Ocean is big. Always bet on the Pacific.