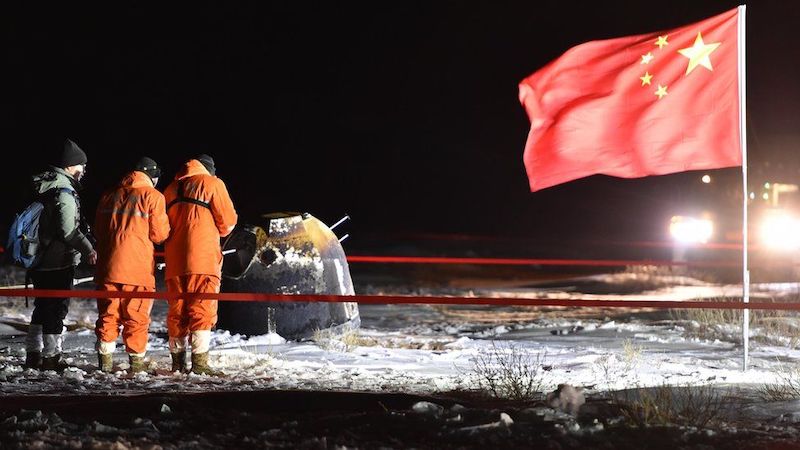 The capsule touched down on snow-covered grassland. Image via BBC News.

SpaceNews and Space Daily are both reporting today (December 22, 2020) that China’s Chang’e 5 mission – one component of which successfully returned rocks from the moon to Earth last week – is now heading for a gravitationally stable point in space, the sun-Earth Lagrange point known as L1. Hu Hao, chief engineer of the mission’s third stage, reported to the press on December 20 that more than 440 pounds (200 kg) of propellant remain: ample fuel to keep the orbiter mobile.

This extended mission follows the craft’s successful return of moon rocks to Earth last week, the first new moon samples in 44 years. The craft launched from Earth on November 23, 2020. The lander landed on the moon on December 1, and the return capsule brought about 60 ounces (3 3/4 pounds, or 1.731 kilograms) of lunar material back to Earth’s surface on December 16. The orbiter remained in space. According to SpaceNews:

The spacecraft is now heading to a sun-Earth Lagrange point to carry out observations of the local environment, the sun, and perform operational tests. 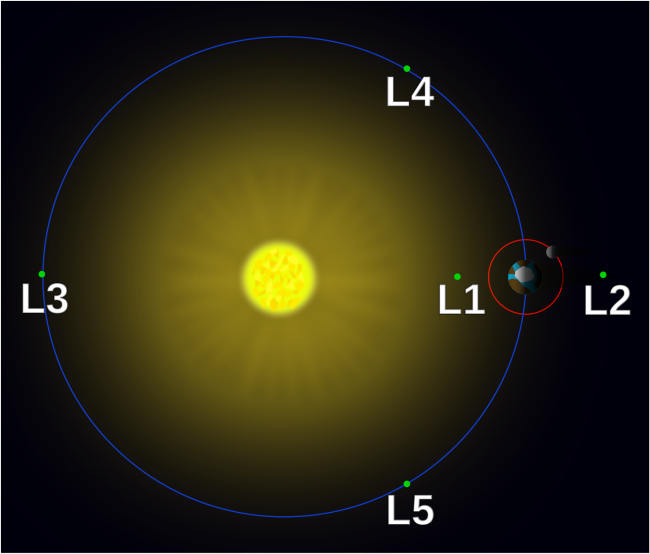 Lagrangian points in the Earth-sun system. These points are more gravitationally stable than other points in space. In this illustration, our Earth and moon are inside the red circle. Chang’e 5 is headed toward L1.

Broadcasters at the China Global Television Network reported on the spacecraft’s parachute return-landing last week in the East Asian country of Mongolia. The landing took place at around 1 p.m. Eastern Time (18:00 UTC) on Wednesday, December 16. The video below, from the South China Morning Post, tells the story of the return of lunar samples to Earth:

The samples returned to Earth in the Chang’e 5 capsule are the first moon rocks to arrive back on Earth since the Soviet Union’s Luna 24 mission in 1976.

The lunar landing site of the Chang’e 5 mission – the Mons Rumker area – was in the vast lunar volcanic plain known as Oceanus Procellarum (Ocean of Storms). Parts of this region on the moon have been explored by other moon missions, including NASA’s Apollo 12 in 1969. Rocks in the Mons Rumker region are thought to have formed just 1.2 billion years ago. In contrast, the moon rocks brought home by the Apollo astronauts – between 1969 and 1972 – are much older. The Planetary Society, a U.S. nonprofit space advocacy group, explained:

The samples should be the youngest ever returned to Earth: just 1.2 billion years old, when multicellular life may have already evolved on our planet. Chang’e-5 will help scientists understand what was happening late in the moon’s history, as well as how Earth and the solar system evolved.

Check out the video below, which has been making the rounds on social media. It consists of hundreds of photos stitched together to show Chang’e 5’s successful lunar landing:

The landing of Chang'e 5's descender and ascender unit. 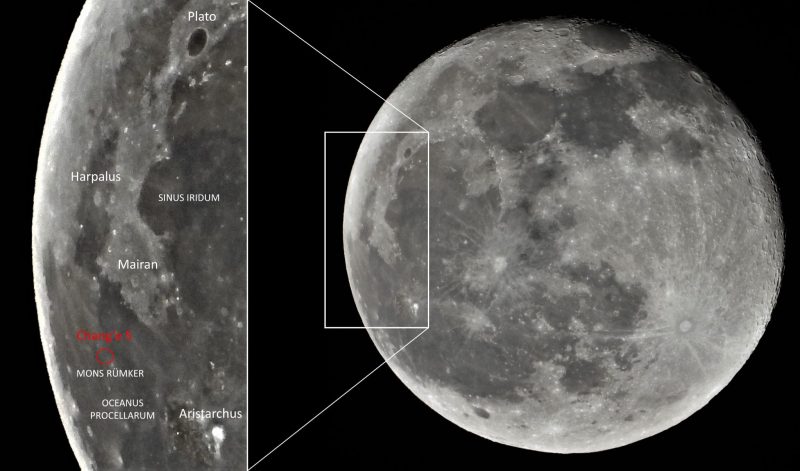 View at EarthSky Community Photos. | Nuno Sequeira in Lisbon, Portugal, captured this image of the moon on December 1, 2020, and kindly marked Chang’e 5’s landing site. Nuno wrote, “The approximate landing zone of the Chang’e 5 probe … It will enjoy 2 weeks of sunlight.” Thank you, Nuno!

The Chang’e 5 mission launched November 23 from the Wenchang Space Launch Center in China’s Hainan province. It was carried atop a Long March 5 rocket.

Chang’e 5 is not the only ongoing sample-return mission. Japan’s Hayabusa2 mission returned a lander from space to the continent of Australia on December 6, 2020; it brought pieces of the asteroid Ryugu collected over two years ago. More recently, NASA’s OSIRIS-REx probe took a sample of the asteroid Bennu; that material is expected to be returned to Earth in September 2023.

And it seems that China has big plans for the moon. Speaking to astronauts aboard the Shenzhou 10 spacecraft through a video call in 2013, Chinese president Xi Jinping said:

The space dream is part of the dream to make China stronger. The Chinese people will take bigger strides to explore further into space.

China became the first country to send an unmanned rover to the far side of the moon last year. Last July, China launched its first unmanned mission to Mars – Tianwen-1 – expected to arrive in February 2021. If Tianwen-1 is successful, Beijing hopes eventually to send a manned mission to Mars. There are also plans to bring up a permanent space station by 2022, as well as sending astronauts back to the moon by the 2030s.

If this proves successful, China would become the second country in the world to put a human on the moon, after the U.S.

The mission, named after the ancient Chinese goddess of the moon, collected lunar material to help scientists understand more about the moon’s origins and formation. Image via China Global Television Network.

Bottom line: China’s robotic Chang’e 5 spacecraft is now heading for a gravitationally stable point in space, the sun-Earth Lagrange point known as L1, after another component of the craft returned successfully to Earth on December 16, loaded with moon rocks — the first since the Soviet Union’s Luna 24 mission in 1976.