Chariklo is the smallest space body known to have rings. A new supercomputer simulation by Japanese researchers suggests a life expectancy for the rings of only 1 to 100 years.

The Center for Computational Astrophysics in New York said on Friday (April 28, 2017) that Japanese researchers have modeled the two known rings around 10199 Chariklo, a possible dwarf planet orbiting the sun between the major planets Saturn and Uranus. They say it’s the first time an entire ring system has been simulated using realistic sizes for the ring particles while also taking into account collisions and gravitational interactions between the particles. They also created the visuals on this page, including the video above, which lets you dive into Chariklo’s ring system. Note that Chariklo itself is really potato-shaped and no doubt pocked with craters; the round, smooth shape in the video is for purposes of the simulation.

These researchers’ work is published in the peer-reviewed March 2017 edition of The Astrophysical Journal Letters.

Chariklo is a tiny world. Its estimated size about 200 miles (334 km) by about 140 miles (226 km) by about 100 miles (172 km). Our solar system’s major outer planets (Jupiter, Saturn, Uranus, Neptune) all are known to have rings. These planets’ rings are composed of particles estimated to range from inches to several feet (centimeters to meters) in size. Chariklo’s gravitational attraction is small relative to the major planets, so its rings – which were discovered in 2014 – are likely only temporary.

Although Chariklo is small, and although its gravity is relatively weak, its rings are as opaque as those around Saturn and Uranus. Thus, the researchers said, Chariklo offered an ideal chance to model a complete ring system.

The team said their simulation revealed information about the size and density of the particles in the rings. They found that Chariklo’s inner ring should be unstable without help. So – the researchers said – the ring particles must be much smaller than previously thought. Or it means that an undiscovered shepherd satellite around Chariklo is stabilizing the ring. 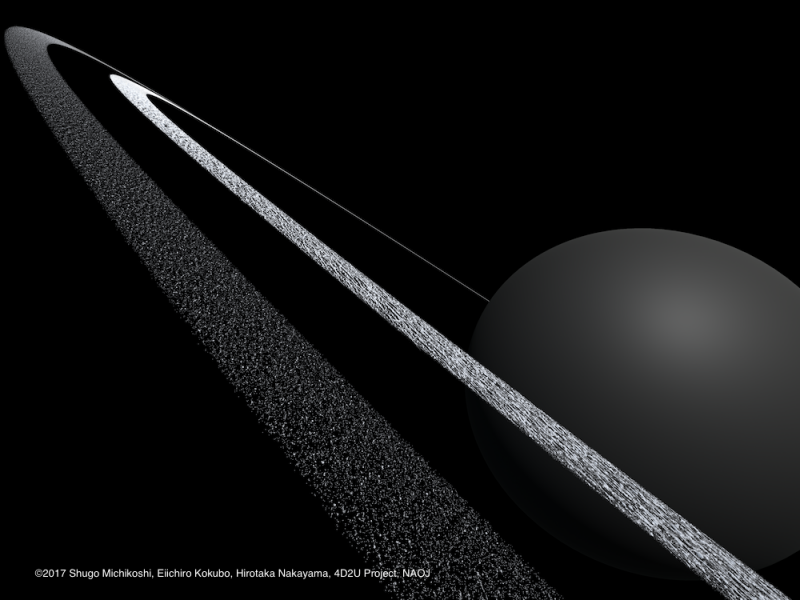 Visualization constructed from simulation of Chariklo’s double ring. Note that Chariklo itself is really potato-shaped and no doubt pocked with craters; the round, smooth shape here is for purposes of the simulation. Image via Shugo Michikoshi, Eiichiro Kokubo, Hirotaka Nakayama, 4D2U Project, NAOJ/ CFCA.

The researchers – Shugo Michikoshi (Kyoto Women’s University/University of Tsukuba) and Eiichiro Kokubo (National Astronomical Observatory of Japan, or NAOJ) modeled Chariklo’s rings using the supercomputer ATERUI*1 at NAOJ. They calculated the motions of 345 million ring particles with the realistic size of a few meters taking into account the collisions and mutual gravitational attractions between the particles.

Chariklo is the largest member of a class known as the Centaurs, orbiting between Saturn and Uranus in the outer solar system. These bodies are categorized like asteroids, but, whereas most asteroids lie in the asteroid belt between Mars and Jupiter – closer to the sun – Centaurs may have come from the Kuiper Belt, which is visualized as extending from the orbit of the outermost major planet Neptune to approximately 50 Earth-sun units (AU) from our sun. Centaurs have unstable orbits that cross the giant planets’ orbit. Chariklo’s orbit gazes that of Uranus. Because their orbits are frequently perturbed, Centaurs like Chariklo are expected to only remain in their orbits only for millions of years, in contrast to our Earth and the other major planets which have been orbiting for billions of years around our sun.

The new computer visualization suggests that the density of Chariklo’s ring particles must be less than half the density of Chariklo itself. And they show a striped pattern forming in the inner ring due to interactions between the particles. They use the term “self-gravity wakes” for this pattern (see the image below). These self-gravity wakes accelerate the break-up of the ring, the researchers said.

But perhaps the most surprising result of the new study is a recalculated life expectancy for Chariklo’s rings. The study suggests the rings may be able to reamin around Chariklo for only one to 100 years! That’s much shorter than previous estimates, and it’s less than an eye-blink in astronomical terms.

So what we are seeing with Chariklo and its ring system is likely a very temporary and dynamic situation. Things in space tend to happen on a vastly-longer timescales than we humans are used to, but sometimes things do happen on human timescales. Chariklo’s rings may be an example!

Simulation of Chariklo’s ring system. The researchers said they used a ring particle density equal to half of Chariklo’s density, in order to maintain the rings’ overall structure. In the close-up view (right) complicated, elongated structures are visible. These structures are called self-gravity wakes. The numbers along the axes indicate distances in km. Image via Shugo Michikoshi / CFCA.

Bottom line: Chariklo – a possible dwarf planet orbiting between Saturn and Uranus – has been known to have rings since 2014. Japanese researchers have created a first-ever supercomputer simulation of Chariklo’s surprising rings.