Water ice in permanently shadowed craters on Ceres. Water ice everywhere, on or near the surface. Last week, Dawn spacecraft scientists presented 2 lines of evidence that Ceres is water-rich.

This movie of images from the Dawn spacecraft shows a crater on Ceres that’s partly in shadow all the time. Scientists call these craters “cold traps” and say water could be preserved in them for a very long time. Image via NASA JPL/ Caltech/ UCLA/ MPS/ DLR/ IDA.

As far as we know, life requires water. And, more and more, research suggests that asteroids delivered at least some of Earth’s water. So it’s reassuring to learn that Ceres – largest body in the asteroid belt between Mars and Jupiter, categorized as a dwarf planet – is water-rich. Two distinct lines of evidence in newly published studies, presented this past week at the 2016 American Geophysical Union meeting in San Francisco, show that Ceres has abundant water-ice.

Both new studies use Dawn spacecraft data. Dawn, which previously visited asteroid Vesta, has been orbiting Ceres since March 2015. It’s currently flying in an orbit more than 4,500 miles (7,200 km) from the dwarf planet. Carol Raymond, deputy principal investigator of the Dawn mission at JPL in California, spoke of the new studies in a NASA statement, saying they:

… support the idea that ice separated from rock early in Ceres’ history, forming an ice-rich crustal layer, and that ice has remained near the surface over the history of the solar system.

Did you catch the reference to near the surface? Those words might be good news to future space explorers, who might consider the possibility of mining ice on Ceres for rocket fuel.

And if astronauts ever do travel to Ceres, they’ll know exactly where to look for water-ice. One place will be that little world’s permanently shadowed craters.

This gif shows the changes in sunlight on the surface of Ceres. Some cratered regions remain in shadow throughout the year. Image via Nature Video.

It’s been suggested previously that Ceres has ice in craters that remain in permanent shadow. Publishing in the peer-reviewed journal Nature Astronomy on December 15, 2016, Thomas Platz of the Max Planck Institute in Germany and his team focused hundreds of cold, dark craters in Ceres’ Northern Hemisphere – labeled as cold traps by scientists. There, temperatures hover around less than minus 260 degrees Fahrenheit (-162 Celsius), so chilly, these scientists say that:

… very little of the ice turns into vapor in the course of a billion years.

Researchers found deposits of bright material in 10 of these craters. In one crater that is partially sunlit, Dawn’s infrared mapping spectrometer confirmed the presence of ice.

This paper’s co-author Norbert Schorghofer of the University of Hawaii said his team is interested in how Ceres got its water:

… and how it managed to last so long. It could have come from Ceres’ ice-rich crust [see below], or it could have been delivered from space.

Regardless of its origin, these scientists say, water molecules on Ceres have the ability to hop around from warmer regions to the poles. A tenuous water atmosphere has been suggested by previous research. Water molecules that leave the surface would fall back onto Ceres, and could land in cold traps. With every hop there is a chance the molecule is lost to space, but a fraction of them ends up in the cold traps, where they accumulate. 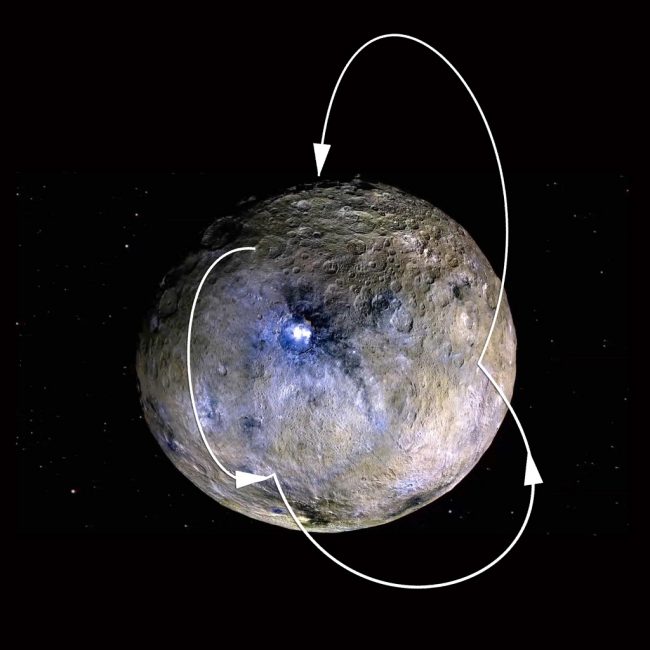 Arrowed lines of water molecules bouncing on Ceres to eventually end up in a cold trap at the north pole. Image via NASA JPL/ Caltech/ UCLA/ MPS/ DLR/ IDA.

The second line of evidence for abundant water-ice on Ceres is related to the presence of hydrogen on the dwarf planet (think H2O). The second new study was published in the peer-reviewed journal Science on December 15, 2016. It suggests that Ceres’ uppermost surface is rich in hydrogen, with higher concentrations at mid-to-high latitudes – consistent with broad expanses of water ice. Thomas Prettyman of the Planetary Science Institute in Tucson, Arizona, is first author and principal investigator of Dawn’s gamma ray and neutron detector (GRaND) instrument. He said

On Ceres, ice is not just localized to a few craters. It’s everywhere, and nearer to the surface with higher latitudes.

His team used the GRaND to determine the concentrations of hydrogen, iron and potassium in the uppermost yard (or meter) of Ceres. GRaND measures the number and energy of gamma rays and neutrons emanating from Ceres. Neutrons are produced as galactic cosmic rays interact with Ceres’ surface. Some neutrons get absorbed into the surface, while others escape. Since hydrogen slows down neutrons, it is associated with fewer neutrons escaping. On Ceres, hydrogen is likely to be in the form of frozen water (which is made of two hydrogen atoms and one oxygen atom).

Rather than a solid ice layer, there is likely to be a porous mixture of rocky materials in which ice fills the pores, researchers found. The GRaND data show that the mixture is about 10 percent ice by weight. Prettyman said:

These results confirm predictions made nearly three decades ago that ice can survive for billions of years just beneath the surface of Ceres. The evidence strengthens the case for the presence of near-surface water ice on other main belt asteroids. 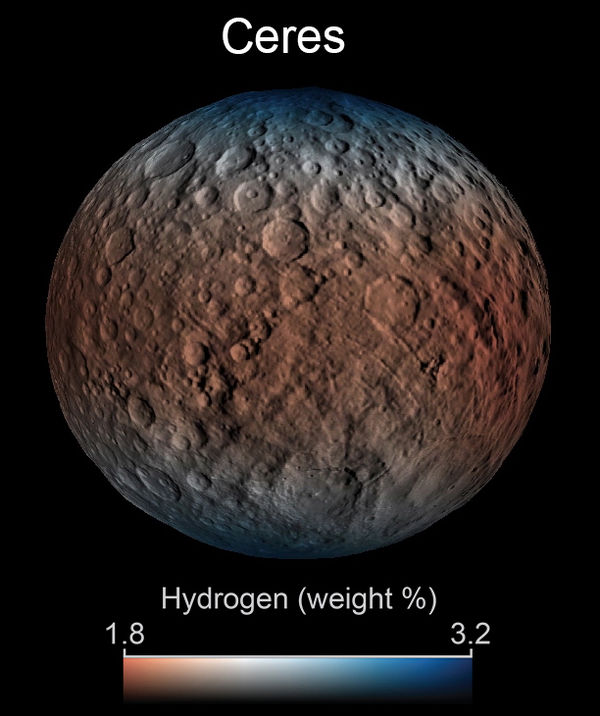 Water, water everywhere on Ceres, just beneath its surface, especially around the planet’s poles, according to a new study. Image via T.H. Prettyman and N. Yamashita, Planetary Science Institute/ NASA.