Dawn spacecraft now closing in on dwarf planet Ceres. Image is for navigation purposes; next one due late January. And what is that white spot, anyway? 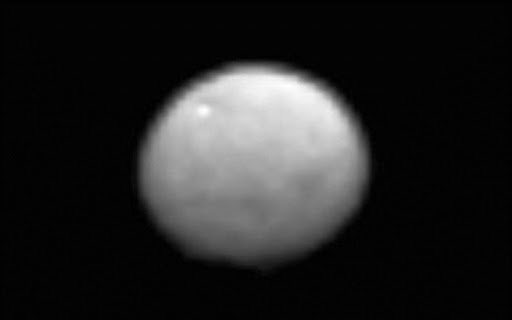 NASA’s Dawn spacecraft is cruising the solar system, heading for capture into orbit by the dwarf planet Ceres on March 6, 2015. As it closes in on 1 Ceres – the first “asteroid” ever discovered, in 1801 – NASA released a new image of the dwarf world on January 19. It’s 27 pixels across, about three times better than the first calibration images taken in early December. And it’ll only get better!

These are the first in a series of images that will be taken for navigation purposes during the approach to Ceres. The images will continuously improve as the spacecraft approaches Ceres and finally is captured into orbit around it. Then they’ll get better still, as Dawn spirals closer to Ceres’ surface during its 16-month study of the dwarf planet.

Now about that white spot …

Our knowledge of the white spot’s existence is relatively recent, given Ceres’ long history. The Hubble Space Telescope first captured images of the spot in 2003 and 2004. Dawn’s images of the spot aren’t quite as sharp as those of Hubble so far. But Dawn’s images will surpass Hubble’s resolution at the next imaging opportunity, which will be at the end of January.

What is the white spot? No one can say yet for certain, but one hypothesis is that it’s a frozen pool of water ice at the bottom of a crater, reflecting the light of the sun. Or it could be something else. When Dawn gets there, we’ll know. 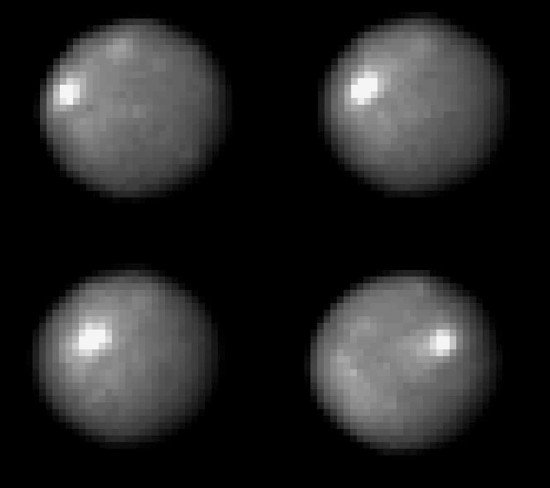 Hubble images of the mysterious white spot on Ceres, captured in 2003 and 2004. Image via NASA.

Scientists have also detected water vapor puffing up from Ceres’ surface, possibly indicating at subsurface reservoirs of liquid water. Some scientists think it’s possible that the surface conceals an ocean! Water = life on Earth, but whether the same is true of Ceres we can’t say yet. Perhaps Dawn will answer this question, or maybe not.

Ceres is the biggest body in the main asteroid belt between Mars and Jupiter, and it’s the smallest of the IAU’s relatively recently categorized dwarf planets (Ceres became a dwarf planet at the same time Pluto did). Ceres has an average diameter of 590 miles (950 kilometers). Dawn’s arrival at Ceres will mark the first time a spacecraft has ever visited a dwarf planet. A spacecraft is on the way to Pluto, too, by the way. New Horizons will sweep past Pluto in July, 2015, giving plenty of opportunity for comparisons between the two worlds.

The Dawn spacecraft has already delivered more than 30,000 images and many insights about Vesta, the second most massive body in the asteroid belt. Dawn orbited Vesta, whose average diameter is 326 miles (525 kilometers), from 2011 to 2012.

Thanks to its ion propulsion system, Dawn is about to become the first spacecraft ever to orbit two worlds in our solar system! Stay tuned.