Scientists have learned that dwarf planet Ceres’ bright spots are only 4 million years old. To geologists, youth means activity and, in this case, ice volcanos. 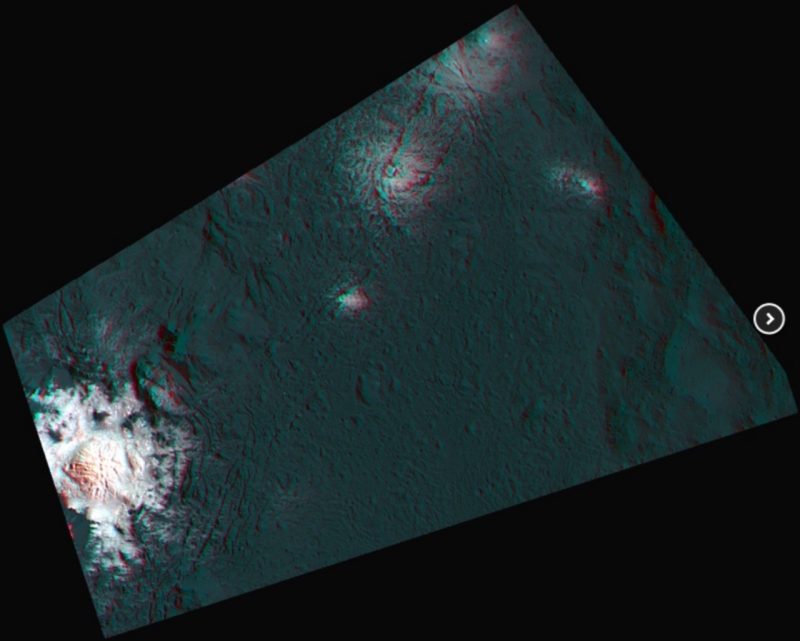 Coolest Ceres bright spot image yet? Stereoscopic 3D and false-color image of a part of Occator crater, within which the bright spots reside. The image clearly shows the bright spots’ dome shape. Image via /JPL-Caltech/UCLA/MPS/DLR/IDA

The dwarf planet Ceres’ bright spot controversy has all but been laid to rest. We don’t often see claims anymore that they’re a sign of extraterrestrial life, as we did in 2015, when the Dawn spacecraft first spotted them on approach to Ceres. Now Dawn has been orbiting Ceres for nearly two years, moving into various orbits that have given it multiple perspectives on the planet. We’ve learned that Ceres has many bright spots and that they’re salt deposits. But scientists are still studying Ceres’ bright spots. On March 6, 2017, the Max Planck Institute for Solar System Research (MPS) said that scientists have, for the first time, determined the spots’ age. They are only about four million years, some 30 million years younger than Occator crater, the crater within which they lie. This results suggests eruptive outbursts of sub-surface brine on Ceres over a long period, until “almost recently.” As these scientists’ statement said:

Ceres is thus the body closest to the sun that shows cryovolcanic [ice volcanic] activity.

Dawn’s scientific imaging system – the Dawn Framing Cameras – were developed and built and are operated under the leadership of the MPS. Researchers there have been investigating the complex geologic structures the cameras have revealed. At its lowest orbit – the so-called Low Altitude Mapping Orbit – Dawn was only 235 miles (375 km) above Ceres’ surface. Detailed images of Occator crater showed fractures, avalanches, and younger, smaller craters. Andreas Nathues, Framing Camera Lead Investigator, said:

In these data, the origin and evolution of the crater as it presents itself today can be read more clearly than ever before. 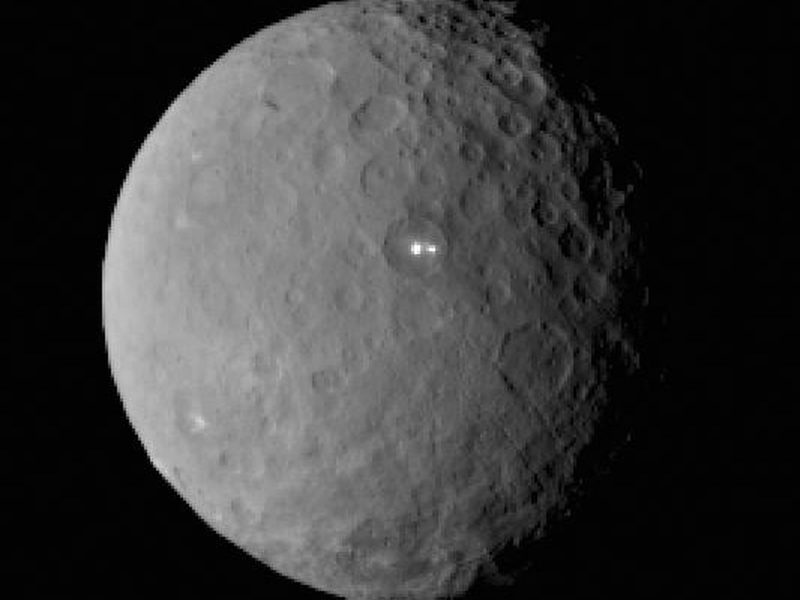 Here’s the image that set off the Ceres bright spot controversy in 2015. NASA’s Dawn spacecraft acquired it on approach to Ceres, at a distance of some 29,000 miles (46,000 km). Although some thought they heralded alien life, the bright spots turned out to be salt deposits. Image via NASA/JPL-Caltech/UCLA/MPS/DLR/IDA.

Located in Ceres’ northern hemisphere, Occator crater is 57 miles (92 km) wide. In its center is a pit with a diameter of about 7 miles (11 km). On some parts of its edges, jagged mountains and steep slopes rise up to 2,460 feet (750 meters). Within the pit a bright dome formed. It has a diameter of about 2 miles (3 km), is about 1,300 feet (400 meters) high and displays prominent fractures. MPS scientist Thomas Platz commented:

This dome contains the brightest material on Ceres.

Nathues and his team interpret the central pit with its rocky, jagged ridge as a remnant of a former central mountain. It formed as a result of the impact that created Occator Crater some 34 million years ago and collapsed later. They believe the dome of bright material is much younger: only approximately four million years. Their statement explained:

The key to determining these ages was the accurate counting and measuring of smaller craters torn by later impacts. This method’s basic assumption is that surfaces showing many craters are older than those that are less strongly ‘perforated.’ Since even very small craters are visible in highly resolved images, the new study contains the most accurate dating so far.

These scientists are now speaking of a “recurring, eruptive process” on Ceres. They say a look into Jupiter’s system of moons supports this theory. The jovian moons Callisto and Ganymede, for example, show domes similar to that found in Ceres’ Occator crater.

Researchers interpret them as volcanic deposits and thus as signs of ice volcanism (cryovolcanism) since Ceres is too small and too far from the sun to have hot magma at its core. 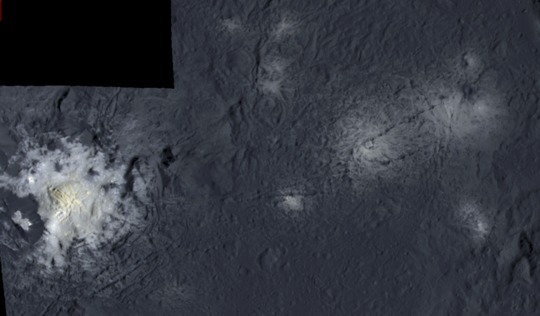 False color mosaic showing parts of Occator crater. The images were taken from a distance of 235 miles (375 km). The left side of the mosaic shows the central pit containing the brightest material on Ceres. It measures 7 miles (11 km) in diameter and is partly surrounded by jagged mountains. In the middle of the pit a dome towers 1,300 feet (400 meters) high covered by fractures. It has a diameter of three kilometers. The right side of the mosaic shows further, less bright spots in Occator crater. Image via NASA/JPL-Caltech/UCLA/MPS/DLR/IDA.

The large impact that tore the giant Occator crater into the surface of the dwarf planet must have originally started everything and triggered the later cryovolcanic activity.

Following the disruption of the impact, the brine researchers suspect either as a complete layer or as scattered patches under the rocky mantle was able to move closer to the surface. The lower pressure allowed water and dissolved gases, such as methane and carbon dioxide, to escape forming a system of vents. At the surface, fractures appeared through which the saturated solution erupted from the depth.

The deposited salts gradually formed the present dome, with the last of these eruptions creating the present surface of the dome four million years ago. 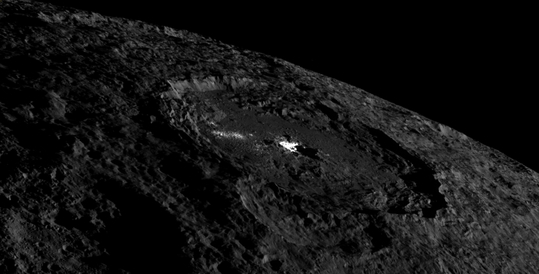 This view of the whole Occator crater shows the brightly colored pit in its center and the cryovolcanic dome. The jagged mountains on the edge of the pit throw their shadows on parts of the pit. This image was taken from a distance of 918 miles (1,478 km) above Ceres’ surface. Image via NASA/JPL-Caltech/UCLA/MPS/DLR/IDA