Zoom in on the Ghost Nebula

Nebula IC 63 – in the direction of our constellation Cassiopeia – is slowly dissipating under the influence of ionizing ultraviolet radiation from a hot, luminous variable star known as Gamma Cas.

The video above zooms in on nebula IC 63 — nicknamed the Ghost Nebula — about 550 light-years away. It starts with a view of the night sky as seen from the ground. It then zooms through observations from the Digitized Sky Survey 2, and ends with a view of the nebula obtained with the NASA/ESA Hubble Space Telescope.

The nebula, or space cloud made of gas and dust, known as IC 63, is sometimes called the Ghost Nebula. It’s about 550 light-years from us, in the direction of the constellation Cassiopeia the Queen. It looks ghostlike in telescopic images, such as the one by the Hubble Space Telescope shown below.

Like any respectable ghost, IC 63 is slowly melting away; that is, it’s dissipating due to intense radiation from a nearby unpredictably variable star, Gamma Cassiopeiae, aka Gamma Cas. Did we say nearby? We meant several light-years away.

Yet – even from this distance – Gamma Cas is profoundly affecting the Ghost Nebula. 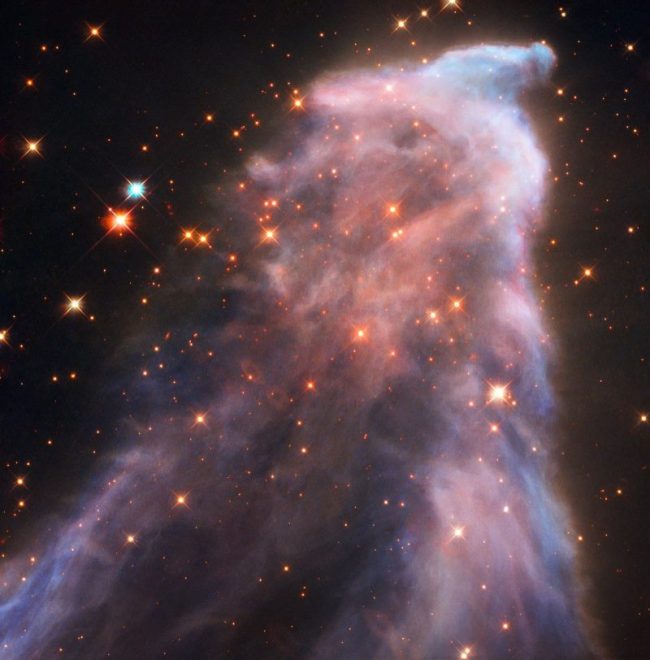 NASA explained in a statement:

Gamma Cassiopeiae is a blue-white subgiant variable star that is surrounded by a gaseous disk. This star is 19 times more massive and 65,000 times brighter than our sun. It also rotates at the incredible speed of 1 milllion miles per hour [1.6 million km per hour] – more than 200 times faster than our parent star. This frenzied rotation gives it a squashed appearance. The fast rotation causes eruptions of mass from the star into a surrounding disk. This mass loss is related to the observed brightness variations. 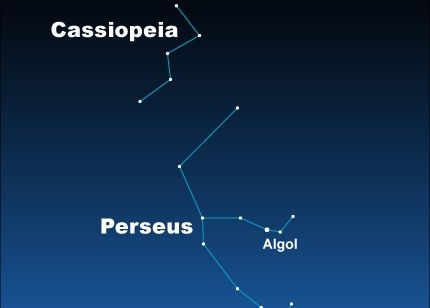 On autumn evenings in the Northern Hemisphere, you’ll easily see the constellation Cassiopeia as an M- or W-shaped star pattern, ascending in the northeast.

The colors in the Ghost Nebula show how the nebula is affected by the powerful radiation from the distant star. NASA said:

The hydrogen within IC 63 is being bombarded with ultraviolet radiation from Gamma Cassiopeiae, causing its electrons to gain energy which they later release as hydrogen-alpha radiation – visible in red in [the Hubble image above].

This hydrogen-alpha radiation makes IC 63 an emission nebula, but we also see blue light in this image. This is light from Gamma Cassiopeiae that has been reflected by dust particles in the nebula, meaning that IC 63 is also a reflection nebula.

This colorful and ghostly nebula is slowly dissipating under the influence of ultraviolet radiation from Gamma Cassiopeiae. However, IC 63 is not the only object under the influence of the mighty star. It is part of a much larger nebulous region surrounding Gamma Cassiopeiae that measures approximately two degrees on the sky – roughly four times as wide as the full moon. 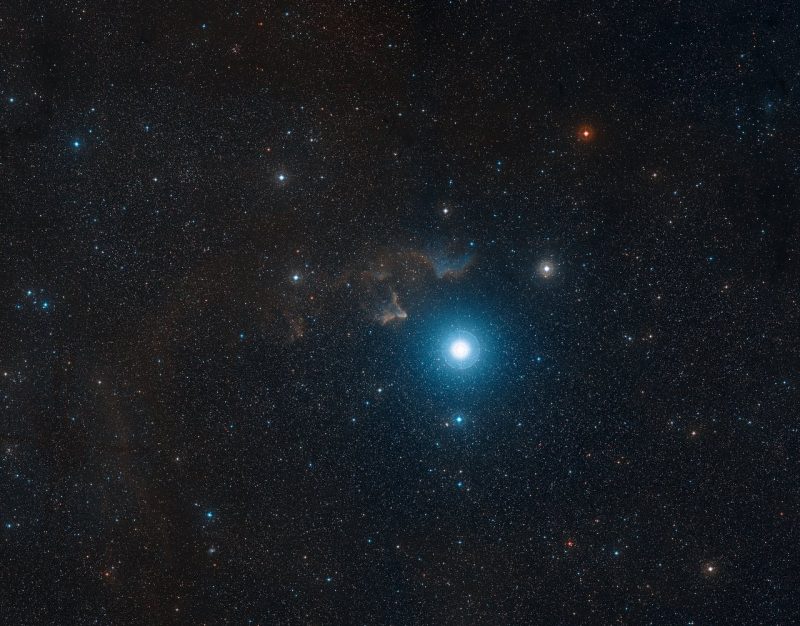 Ground-based view of the sky around the Ghost Nebula. The bright star is Gamma Cassiopeiae. Via ESA/Hubble/NASA/Digitized Sky Survey 2/Davide de Martin.

Bottom line: Zoom-in video, photos, and info about IC 63, the Ghost Nebula, which is being shaped by radiation from the variable star Gamma Cassiopeia.