The Cassini spacecraft will zip past Saturn’s moon Dione on Monday, August 17 . It will be the spacecraft’s final close flyby of this icy satellite. 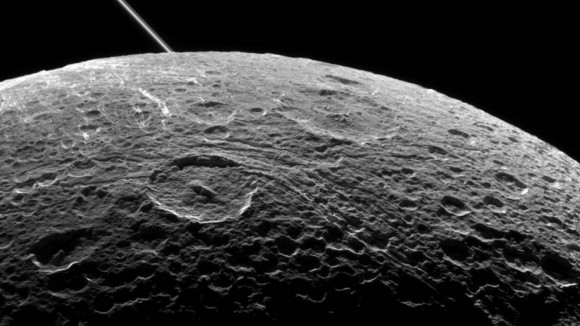 A view of Saturn’s moon Dione captured by NASA’s Cassini spacecraft during a close flyby on June 16, 2015. The diagonal line near upper left is the rings of Saturn, in the distance. Image credit: NASA/JPL-Caltech/Space Science Institute

Cassini scientists have a bevy of investigations planned for Dione. Gravity-science data from the flyby will improve scientists’ knowledge of the moon’s internal structure and allow comparisons to Saturn’s other moons. Cassini has performed this sort of gravity science investigation with only a handful of Saturn’s 62 known moons.

During the flyby, Cassini’s cameras and spectrometers will get a high-resolution peek at Dione’s north pole at a resolution of only a few feet (or meters). In addition, Cassini’s Composite Infrared Spectrometer instrument will map areas on the icy moon that have unusual thermal anomalies — those regions are especially good at trapping heat. Meanwhile, the mission’s Cosmic Dust Analyzer continues its search for dust particles emitted from Dione.

This flyby will be the fifth targeted encounter with Dione of Cassini’s tour at Saturn. Targeted encounters require maneuvers to precisely steer the spacecraft toward a desired path above a moon. The spacecraft executed a 12-second burn using its thrusters on Aug. 9, which fine-tuned the trajectory to enable the upcoming encounter.

Cassini’s closest-ever flyby of Dione was in December 2011, at a distance of 60 miles (100 kilometers). Those previous close Cassini flybys yielded high-resolution views of the bright, wispy terrain on Dione first seen during the Voyager mission. Cassini’s sharp views revealed the bright features to be a system of braided canyons with bright walls. Scientists also have been eager to find out if Dione has geologic activity, like Saturn’s geyser-spouting moon Enceladus, but at a much lower level.

Dione has been an enigma, giving hints of active geologic processes, including a transient atmosphere and evidence of ice volcanoes. But we’ve never found the smoking gun. The fifth flyby of Dione will be our last chance.

Cassini has been orbiting Saturn since 2004. After a series of close moon flybys in late 2015, the spacecraft will depart Saturn’s equatorial plane – where moon flybys occur most frequently – to begin a year-long setup of the mission’s daring final year. For its grand finale, Cassini will repeatedly dive through the space between Saturn and its rings.

This will be our last chance to see Dione up close for many years to come. Cassini has provided insights into this icy moon’s mysteries, along with a rich data set and a host of new questions for scientists to ponder.