NASA’s Cassini spacecraft – now in its grand finale year orbiting Saturn – caught the series of close-ups above of the little Saturn moon Pan on March 7, 2017. Scientists are saying that weird ridge around Pan’s equator could be a couple of miles high and is likely made of dust from Saturn’s rings. Carolyn C. Porco, who leads Cassini’s imaging team, told the New York Times she was asleep when Cassini’s shots were transmitted to Earth and first saw an image on Twitter:

I saw this picture, and I thought, that’s an artist’s conception. Then I realized it was real.

Pan is named for the flute-playing Greek god of hunters and shepherds and is one of Saturn’s shepherd satellites. That is, it’s responsible for clearing one of the gaps in Saturn’s rings – in this case, the Encke Gap – keeping it free of ring particles. 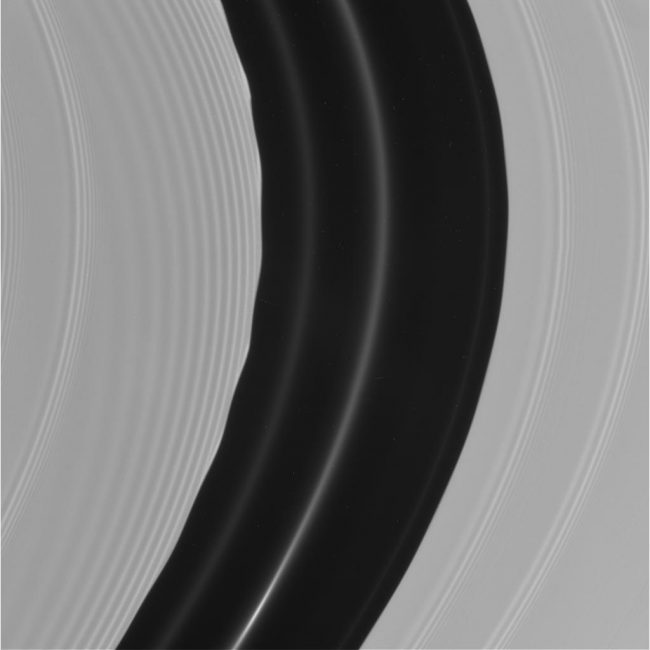 The Encke Gap in Saturn’s ring. It’s about 200 miles (325 km) wide. The moon Pan – which creates this gap in the rings – is about 20 miles (34 km) at its longest diameter. The wavy inner edge of the gap and the wake-like structures emanating from its inner edge are caused by Pan, which orbits in the middle of the gap. Two fainter ring features are also visible in the gap region. Image via NASA PhotoJournal.

Scientists discovered Pan in 1990 via an analysis of old Voyager 2 images, after noticing the edges of Saturn’s rings, along Encke Gap, had a wavelike appearance.

They thought the waves must come in the gravitational wake of a small moon orbiting within the gap, and so they do. Pan is the source of the waves.

The Cassini imaging team must feel a bittersweetness about the transformation of our knowledge of this moon – from zero to amazing – since 2004, when Cassini began orbiting Saturn. This is, after all, Cassini’s final year, which is why it’s now plunging so close. In fact, next month, Cassini will begin a series of 22 plunges through the gap between Saturn itself and the rings – an unexplored space only about 1,500 miles (2,400 km) wide. The first dive is scheduled for April 27.

Cassini will end its glorious career at Saturn by plunging into the gaseous body of the planet itself, in September 2017.

But there’s a lot more to come between now and then! 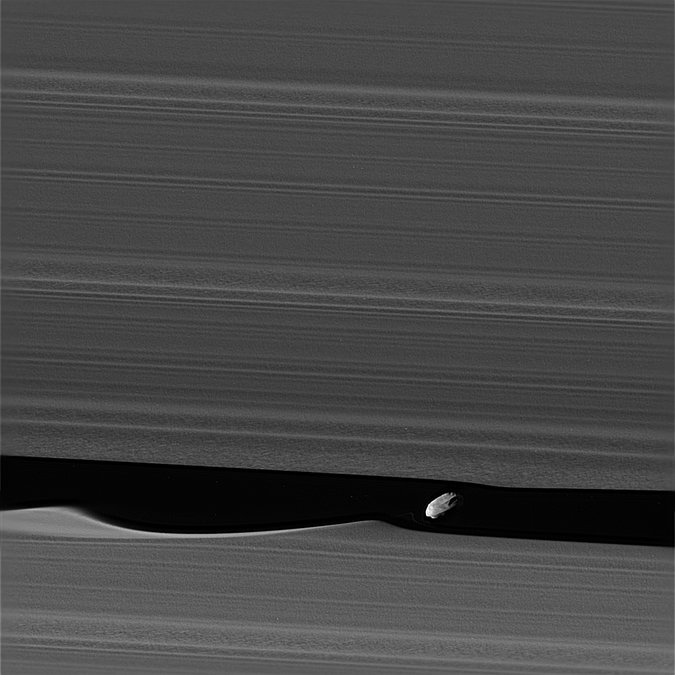 Cassini caught this closest-ever image of another of Saturn’s shepherd moons, Daphnis, on January 16, 2017. This little moon orbits within the Keeler gap in Saturn’s rings. As you can see, it’s also making waves in Saturn’s ring material. And notice that Daphnis – like Pan – has a narrow ridge around its equator, likely an accumulation of particles from Saturn’s rings.