Gorgeous, detailed image of the Carina Nebula, a star nursery approximately 8,500 light-years away, as observed with the Gemini South telescope in Chile. 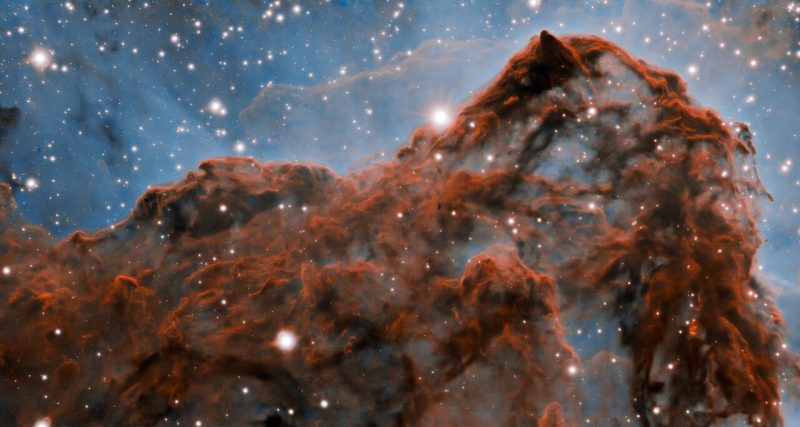 On Monday (October 5, 2020) astronomers released this gorgeous, detailed image of the Carina Nebula, a star nursery approximately 8,500 light-years from Earth, as observed with the Gemini South telescope in Chile.

The image captures a 5-light-year – or 33-trillion-mile (50-trillion-km) – long section of the nebula’s western wall, the well-defined edge of the nebula, and reveals a number of unusual structures in the nebula. (See the annotated image, below.)

The exquisite detail revealed in the image is thanks in part to a technology known as adaptive optics, which resulted in a 10-fold improvement in the sharpness of the research team’s observations.

A nebula is a giant cloud of dust and gas in space. Some nebulae – such as the Carina Nebula – are are “star nurseries” or regions where new stars are beginning to form. The brilliant Carina Nebula, located in the Southern Hemisphere sky, is 500 times larger in actual area than the better-known Orion Nebula, making it an ideal candidate for investigating star formation.

Adaptive optics compensates for the effects of turbulence in the Earth’s atmosphere to produce pin-sharp images, comparable to those from a space telescope. The adaptive optics on the 8.1-meter Gemini South telescope significantly improved upon previous observations of the Carina Nebula’s western wall. 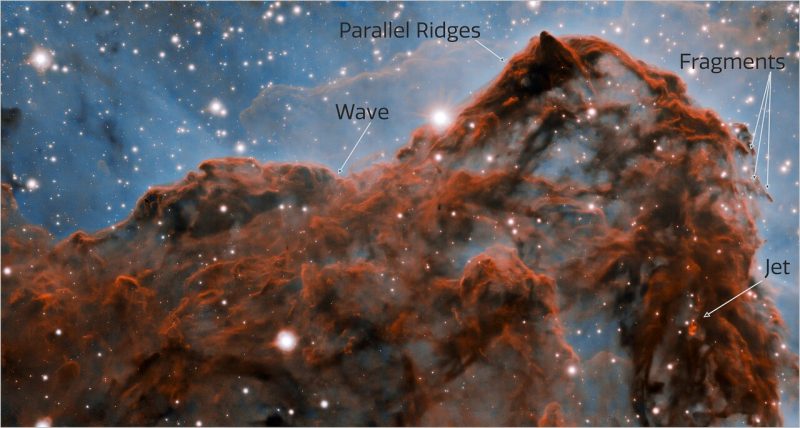 A 5-light-year long section of the western wall in the Carina Nebula as observed with adaptive optics on the Gemini South telescope. This mountainous section of the nebula reveals a number of unusual structures including a long series of parallel ridges that could be produced by a magnetic field, a remarkable almost perfectly smooth wave, and fragments that appear to be in the process of being sheared off the cloud by a strong wind. There is also evidence for a jet of material ejected from a newly-formed star. Image via International Gemini Observatory/ NOIRLab/ NSF/ AURA.

Rice University astronomer Patrick Hartigan is lead author of a paper about the image, published October 5, 2020, in The Astrophysical Journal Letters. He said in a statement:

It is possible that the sun formed in such an environment. If so, radiation and winds from any nearby massive stars would have affected the masses and atmospheres of the solar system’s outer planets.