We can’t rule out signs of aliens in solar system, says study

Using mathematics, researchers conclude that we cannot rule out the possibility of extraterrestrial artifacts in our solar system.

Two Penn State postdoctoral researchers have developed a mathematical equation showing that the presence of alien artifacts – messages, probes or any trace of space aliens in our solar system – cannot be ruled out. Jacob Haqq-Misra and Ravi Kumar Kopparapu say their calculations indicate that we have not looked in enough places to make the claim that our solar system has no extraterrestrial artifacts.

The researchers undertook their study to create a framework by which scientists can estimate the completeness of our search for non-terrestrial artifacts. In a paper about their work, accepted by Acta Astronautica and posted online in ArXiv, November 4, 2011, the reasearchers wrote:

With so many places for such a small observational probe to hide in our own backyard, we may as well keep our eyes open.

Artist’s illustration of the Dawn spacecraft in the asteroid belt. Researchers say that — mathematically — we cannot rule out the possibility of alien artifacts in areas like the asteroid belt or even Earth. Image Credit: NASA

Two Pioneer probes left our solar system carrying plaques about humankind, and two Voyager probes will soon join them to gather information about places far out in our galaxy. Other missions will send more autonomous probes into outer space, but to date we haven’t found evidence of other civilizations doing the same.

The Fermi paradox (formulated by Enrico Fermi) asks, “If intelligent life is common, why have no technological civilizations been observed?” Past debate has offered these answers: 1) life is rare, 2) intelligent cultures inevitably destroy themselves, 3) intelligent beings have not gotten here yet or 4) they are here but not revealing themselves.

Haqq-Misra and Kopparapu looked at the solar system as a fixed volume and calculated percentages of that volume that would need thorough searching. They used a discovery capability small enough to detect alien probes, assuming that the probes are not consciously camouflaged. The researchers note that most searches to date have not been fine enough to locate small probes or to totally rule out any one place. They said:

The vastness of space, combined with our limited searches to date, implies that any … exploratory probes of extraterrestrial origin would likely remain unnoticed. 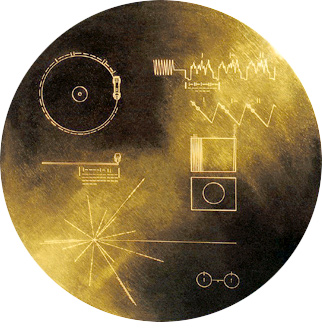 An artifact from Earth, aboard both Voyager spacecraft. Image Credit: NASA

Even without actual contact, the researchers say, other civilizations could be sending unpiloted probes to quietly peek at our civilization. These probes, like ours, would be small and might be hidden in a variety of places. In the asteroid belt they would likely go unnoticed, especially if these nonterrestrial objects are only 3 to 33 feet in size, weighing little more than a ton.

Using a probabilistic method, the researchers found that it is, at this point, difficult to say that there are not extraterrestrial objects in our solar system. They pointed out how very few well-explored areas there are:

The surface of the Earth is one of the few places in the solar system that has been almost completely examined at a spatial resolution of less than 3 feet.

But even as humans have spread across the solid surfaces of the Earth, there are still caves, jungles and deserts, as well as the ocean floor and subsurface areas, that have not been explored. Even so, most believe that no nonterrestrial artifacts exist on Earth.

Locations like the Earth-moon Lagrange points, the asteroid belt and the Kuiper belt might shelter extra-solar-system probes, the researchers point out, but the vast majority of the solar system’s volume is uninvestigated.

Searches to date of the solar system are sufficiently incomplete that we cannot rule out the possibility that nonterrestrial artifacts are present and may even be observing us. The completeness of our search for nonterrestrial objects will inevitably increase as we continue to explore the moon, Mars and other nearby regions of space.

Bottom line: Jacob Haqq-Misra and Ravi Kumar Kopparapu of Penn State University developed a mathematical equation showing that the presence of alien artifacts in our solar system cannot be ruled out, noting that the vastness of space, combined with limited searches, implies that most exploratory probes of extraterrestrial origin would likely remain unnoticed. Their paper was accepted by Acta Astronautica and posted online in ArXiv, November 4, 2011.

If we found alien life, would we know it?