Can we grow food on Mars?

Apparently we can, and you can view details in this video from a talk given at Mars One’s recent private event in Amsterdam.

By now, you’ve likely seen the movie The Martian, in which Matt Damon plays a botanist/astronaut trapped alone on Mars. He improvises a farm with Martian soil, fertilized with human waste, seeded with potatoes saved for a Thanksgiving meal and watered by extracting hydrogen from leftover rocket fuel. How realistic is growing food on Mars? Apparently it can be done, and you can view some details in the video above, posted to YouTube by Mars One on June 23, 2016.

In case you missed it, Mars One is the not-for-profit foundation whose goal is to establish a permanent human settlement on Mars. A little over a year ago, it announced it had selected 50 men and 50 women who would compete via reality television for a one-way Mars trip, as early as 2024. Checking out a June 6, 2016 press release from Mars One about its Astronaut Selection Round Three process, I didn’t find the words “television” or “2024.” But Mars One does continue to say:

The Mars One candidates come from all over the planet, and will undertake the long journey to Mars to live there for the rest of their lives.

So they are, apparently, hanging in there with their concept.

The video is a presentation on growing food for these future permanent Mars settlers, given a recent Mars One private VIP event in Amsterdam. It features Wieger Wamelink of the Netherlands, a senior ecologist at Wageningen University & Research.

Whatever you think of Mars One, you might agree it’s an interesting video. And by the way, Wamelink said he thinks greenhouses on Mars will look less like this: 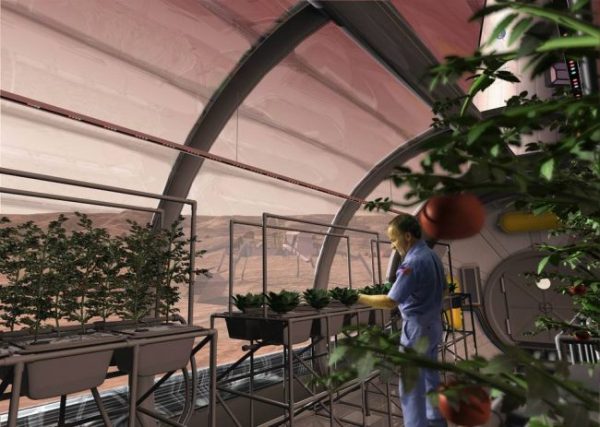 Artist’s concept of a greenhouse on the surface of Mars via SAIC/ NASA.

And more like this (minus all the greenery on the outside):

Artist’s concept of a hobbit house. Wieger Wamelink thinks Mars greenhouses will need substantial soil, or regolith, on top of them, to protect growing plants from cosmic radiation. Image via Wieger Wamelink.

For me, that idea alone – the idea of Mars greenhouses covered in Martian soil – was a step forward in visualizing some of the challenges the first Mars settlers might face, and how they might begin to solve them.

Here’s what NASA said in February, 2016 about growing food on Mars

Bottom line: Video featuring ecologist Wieger Wamelink of the Netherlands, who has been studying the possibility of growing food on Mars. He gave this talk at Mars One’s recent private event in Amsterdam.