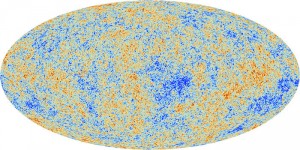 According to the standard model of cosmology, the fluctuations arose immediately after the Big Bang and were stretched to cosmologically large scales during a brief period of accelerated expansion known as inflation.

Planck was designed to map these fluctuations across the whole sky with greater resolution and sensitivity than ever before. By analysing the nature and distribution of the seeds in Planck’s CMB image, we can determine the composition and evolution of the Universe from its birth to the present day.

Thank you! Your submission has been received!
Oops! Something went wrong while submitting the form.
END_OF_DOCUMENT_TOKEN_TO_BE_REPLACED