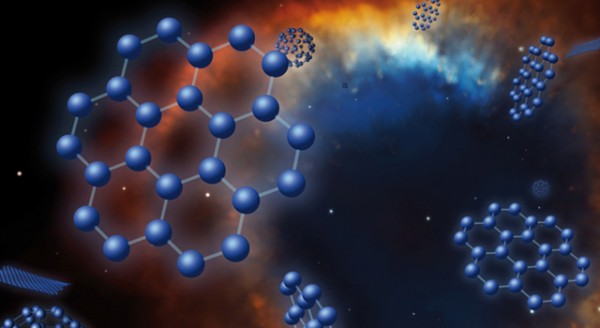 An artist’s concept of graphene, buckyballs (C60) and C70 superimposed on an image of the Helix planetary nebula. Image via IAC/NASA/NOAO/ESA/STScI/NRAO

Scientists from University of Leiden in the Netherlands say they’ve now shown in the lab how buckyballs might form in space. Buckyballs are spherical molecules – also called buckminsterfullerenes. The most common buckyballs contain 60 carbon atoms and thus are called C60 by scientists. Their unique shape calls to mind the geodesic domes first created by the architect Buckminster Fuller. They’re also commonly compared to soccer balls. On Earth, the first buckyballs were generated in the lab in 1985. Since then, they’ve also been found occurring naturally in small quantities in soot. In 2010, astronomers began detecting buckyballs in outer space. But scientists were puzzled … how does such a complex molecule form in space? Now the the scientists in Leiden believe they have the answer, and their work has been accepted for publication in Astrophysical Journal Letters.

Scientists have always felt that, given the sparsity of material in the space between the stars, it’s unlikely that buckyballs would form via a process of building up from smaller molecules. Instead, scientists in Leiden now believe, buckyballs in space might be created in a process where larger organic compounds are stripped down. 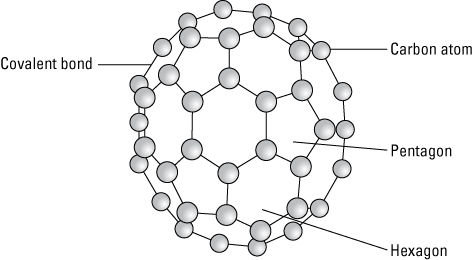 Buckyballs have a cage-like structure, resembling a soccer ball, made of 20 hexagons and 12 pentagons, with a carbon atom at each vertex of each polygon and a bond along each polygon edge. Read more: What is a buckyball?

At the Laboratory for Astrophysics at Leiden Observatory, the scientists created a new setup used to catch very large organic compounds called PAHs, which stands for polycyclic aromatic hydrocarbons. These compounds contain both hydrogen and carbon. They’re the same particles emitted on Earth by cars, contributing to air pollution. The Leiden scientists irradiated their captured PAHs with light and discovered that once a PAH is put into the spotlights, it starts:

… a molecular striptease, stripping off hydrogen atoms one by one, until the naked carbon skeleton is left over.

The experiments show that it is possible to transfer PAHs into molecular soccer balls, and this can explain why we find C60 in space.

Read more details about this experiment from University of Leiden

Bottom line: Big organic compounds called PAHs – whose spectral signature is found everywhere in the universe – might under certain conditions be stripped down to only carbon atoms in the shape of molecular soccer balls: buckyballs, buckminsterfullerenes, or C60. This process could account for the presence of buckyballs in space.