Bright meteor over Australia on July 10 was a rocket reentry

That bright meteor over Australia – seen by many – was likely the reentry of the upper state of a Soyuz rocket, launched two days earlier. Video here. 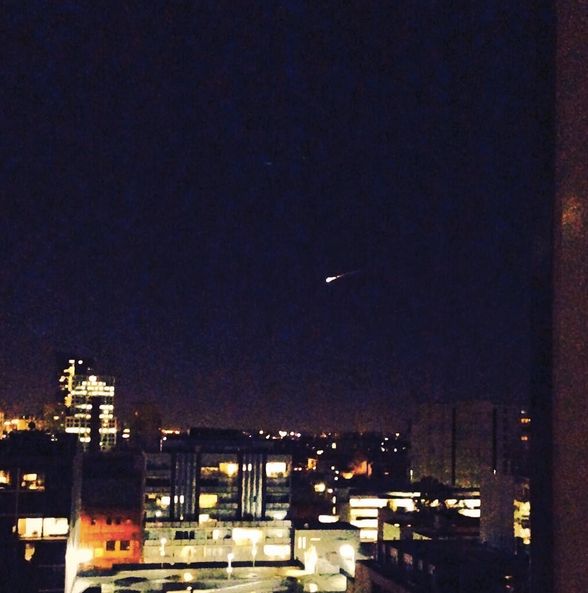 Bright meteor over the city of Melbourne, Australia on July 10, 2014 via Nathalie J. Berger (@najube).

UPDATE JULY 10 AT 1815 UTC (1:15 P.M. CDT). Experts are now reporting that today’s bright meteor – widely reported over southeastern Australia today (July 10, 2014) – was not a piece of natural space debris, but instead was the reentry of the upper state of a Soyuz rocket, launched on July 8. It seems the meteor was part of the vehicle used to launch Russia’s second Meteor-M weather satellite. Jonathan McDowell (@planet4589), an astronomer at the Harvard-Smithsonian Center for Astrophysics, tweeted that the Australian meteor was:

Daniel Fischer (@cosmos4u) pointed out that time and location of the Australian meteor event appear to match the last TIP (Tracking and Impact Prediction) message for the reentry. And, as Fischer pointed out on Twitter just now:

… the video shows it was slooow.

He’s talking about the video below, caught by in Australia via mobile phone. You can see that the meteor does take awhile to streak across the sky, and, indeed, in verbal reports of the meteor from earlier today, people were commenting on how slow it was.

Did you see it? Click here to report your meteor sighting

Thursday night in Australia, reports of a very bright and slow-moving shooting star flooded into the Brisbane Times, which covers the widely populated states of Victoria and New South Wales in southeastern Australia. People in the city of Melbourne, Australia’s second-largest city, also reported a bright object streaking through the sky. The Sun Herald in Melbourne reported:

Social media lit up when the unusual spectacle was seen at around 10pm.

The object – described by witnesses as like a flame – was reported to be flying rapidly.

Charmaine Harris from Thornbury said it lasted more than a minute.

The Australia Bureau of Meteorology, which received reports of the July 10 meteor around 10 p.m., at first said it could be natural debris from space or artificial space junk. Now, it appears it was space junk.

Aviation Week reported on the launch of a Russian Soyuz-2.1b rocket with a Fregat upper stage – carrying a Russian weather satellite and six small spacecraft to orbit on July 8. According to Aviation Week, liftoff took place at 9:58 p.m. local time from the Baikonur Cosmodrome in Kazakhstan.

They said this satellite – Russia’s second Meteor-M weather satellite – is designed to monitor global hydrometeorological data for weather forecasting and to gather data on the ozone and radiation environment in near-Earth space. It will also measure sea-surface temperature, monitoring icy conditions at the poles for navigation. The satellite itself, presumably still safely in orbit, has a design life of five years.

Bottom line: A bright meteor was seen by many in Australia around 10 p.m. local time on July 10, 2014. Experts are now reporting that the meteor was not a piece of natural space debris, but instead was the reentry of the upper state of a Soyuz rocket, launched on July 8.