This Hubble Space Telescope image shows a chain of star clusters resembling a corkscrew-shaped string of pearls winding around the cores of the galaxies. 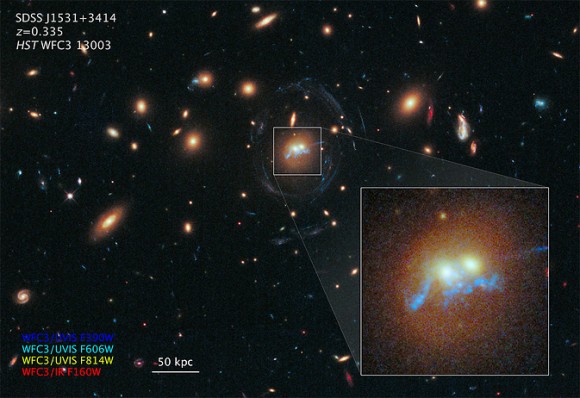 NASA’s Hubble Space Telescope photographed a 100,000-light-year-long structure that looks like a string of pearls twisted into a corkscrew shape winds around the cores of the two massive galaxies. The “pearls” are superclusters of blazing, blue-white, newly born stars. Image and caption via NASA/ESA

Two two ancient, colliding, giant elliptical galaxies appear to have a bridge of young, blue super star clusters evenly spaced in a winding chain between them. The chain of star clusters, which is 100,000 light-years long – or about the length of our Milky Way galaxy – winds in a corkscrew shape around the two giant ellipticals. This Hubble Space Telescope photograph, released by NASA on July 10, 2014, shows this unusual structure, which, scientists said, has never been seen before linking two elliptical galaxies. NASA said the chain of star clusters resembles a corkscrew-shaped string of pearls winding around the cores of the galaxies and also said:

The unique structure of the star spiral may yield new insights into the formation of stellar superclusters that result from merging galaxies and gas dynamics in this rarely seen process.

We were surprised to find this stunning morphology. We’ve long known that the ‘beads on a string’ phenomenon is seen in the arms of spiral galaxies and in tidal bridges between interacting galaxies. However, this particular supercluster arrangement has never been seen before in giant merging elliptical galaxies.

The pair of elliptical galaxies is embedded deep inside the dense galaxy cluster known as SDSS J1531+3414. The cluster’s powerful gravity warps the images of background galaxies into blue streaks and arcs that give the illusion of being inside the cluster, an effect known as gravitational lensing.

Observing astronomers first hypothesized that the string of pearls was actually a lensed image from one of these background galaxies, but their recent follow-up observations with the Nordic Optical Telescope in Santa Cruz de Tenerife, Spain, ruled out this hypothesis.

Read more about the winding chain of super star clusters at NASA.gov

Bottom line: Here is a Hubble Space Telescope photograph, released by NASA on July 10, 2014, showing what appears to be a bridge of young stars spanning two ancient, colliding galaxies. Young, blue super star clusters are evenly spaced along the chain. NASA said the structure resembles a corkscrew-shaped string of pearls winding around the cores of the galaxies.