Then, after separating from the rocket booster, the capsule gently parachuted back down to Earth while the booster executed a flawless vertical landing.

The launch’s test mission, called NS-13, was the seventh consecutive test flight of this particular rocket booster and the thirteenth flight for Blue Origin’s New Shepard program. The booster then returned to Earth about 8 minutes after liftoff; the capsule then followed suit with a clean landing about 10 minutes later. Caitlin Dietrich, a Blue Origin launch commentator, exclaimed:

Touch down – New Shepard, here we go! … That never gets old. 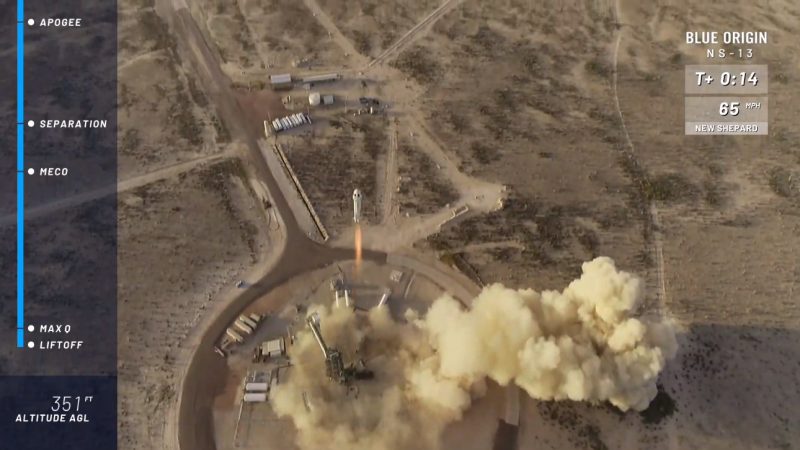 For the NS-13 mission, New Shepard carried 12 science payloads to space and back. One of those payloads was NASA’s Deorbit – Descent and Landing Sensor Demonstration – which was the first payload to ever ride to space on the New Shepard capsule’s exterior rather than inside the spacecraft. The experiment will help develop new landing technologies for NASA’s Artemis program, which aims to put humans back on the Moon in 2024. Blue Origin officials said in a statement:

The experiment will verify how these technologies (sensors, computers, and algorithms) work together to determine a spacecraft’s location and speed as it approaches the moon, enabling a vehicle to land autonomously on the lunar surface within 100 meters of a designated point. The technologies could allow future missions – both crewed and robotic – to target landing sites that weren’t possible during the Apollo missions, such as regions with varied terrain near craters.

Other payloads on NS-13 include a floating plant growth system called µG-LilyPond, a new system for sampling asteroids in low-gravity environments called the Box of Rocks Experiment II, and new cooling technology for keeping spacecraft from overheating. Blue Origin also sent tens of thousands of postcards to space and back as part of the NS-13 mission; the postcards were written and submitted by grade school students via Blue Origin’s nonprofit organization, Club for the Future. 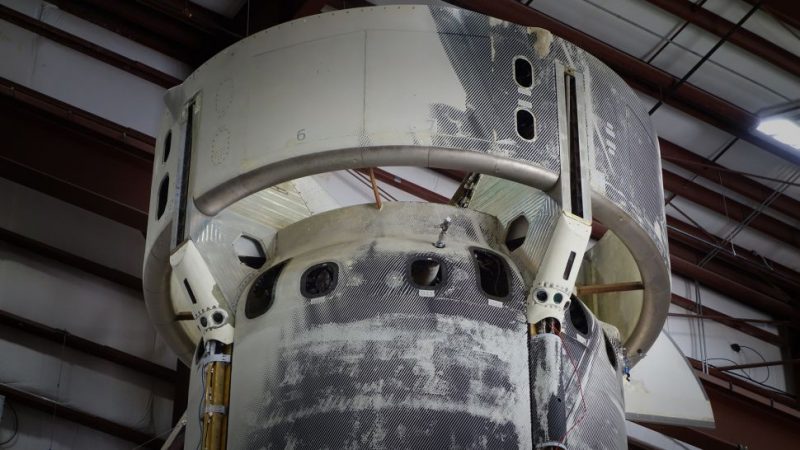 But for all of Blue Origin’s plans for futurist space technologies, the company is often seen as an underdog in the commercial space exploration scene, where CEO Elon Musk’s SpaceX dominates headlines. While Blue Origin has never sent humans to space or put a rocket in orbit, SpaceX – a younger company by two years – is launching massive batches of satellites, sending astronauts to the International Space Station, and test flying a Mars rocket prototype. Musk wants his rocket company to launch people to Mars, establish a self-sustaining city there, and use the red planet as a base from which to further explore our solar system. Meanwhile Bezos, as mentioned earlier, talks of using his Blue Origin to put a permanent base on the moon, build up huge space colonies, and eventually have 1 trillion people living and working in space.

Space is a big place, one rich with resources and adventure for the taking; and of all the people weighing in on how we’ll get to space, what we’ll do there, and on what timeline, the voices of two billionaires – Elon Musk and Jeff Bezos – ring the loudest and most often. However these two grandiose dreams are markedly different, and their owners occasionally spar about the details. Blue Origin’s leadership, however, says it’s all by design. The company’s mascot is a tortoise, meant to symbolize its dedication to go as slowly as needed and never cut corners. It’s by many accounts the opposite of the culture at SpaceX, which embodies the Silicon Valley ethic of moving extremely quickly and embracing mistakes as learning experiences. However, with this said, it’s not inconceivable that their two companies will one day work together in space.

The October 13 launch was initially set for September 24 and was scrubbed (delayed) due to poor weather and some technical issues, but clear skies prevailed this Tuesday morning and New Shepard was seen on the launchpad coming alive minutes before liftoff. Now with 13 test flights under its belt, New Shepard could soon start carrying commercial passengers on 10-minute space tourism flights to suborbital space. However, Blue Origin has not yet announced the date of its first crewed test flight, and the company has not yet started to sell tickets. So far, the vehicle has only carried science experiments and, at one point, a test dummy nicknamed Mannequin Skywalker.

Read more from Business Insider: Elon Musk vs. Jeff Bezos: How their space plans are different