Both Type I and Type II active galaxies have central, supermassive black holes, which consume the galaxies from within. But new work suggests the black holes in Type Is eat faster. 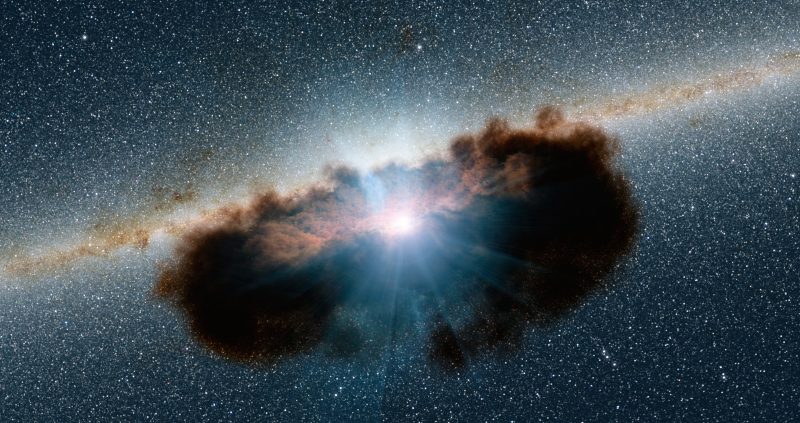 Artist’s concept of an active galaxy – with a supermassive black hole at its core, surrounded by a large, dark, donut-shaped cloud of gas and dust. Differences in Type I and Type II active galaxies were thought to be due to differences in the orientation of this cloud with respect to Earth. But a new study suggests otherwise. Image via NASA/JPL-Caltech.

An international team of astronomers released results today (September 27, 2017) of a new X-ray study of active galaxies, which are those having a compact, highly luminous core in an otherwise normal-looking galaxy. The new study contradicts a decades-old, popular theory – the unified model of active galaxies – and provides a new answer to the question of why Type I active galaxies appear brighter than Type IIs. Both Type Is and Type IIs are thought to have supermassive black holes at their cores. The older unified model suggested Type Is appear brighter from Earth because they’re oriented differently. The new study suggests fundamental physical differences in the way Type Is consume matter and spit out energy. Specifically, it suggests, Type Is are more efficient eaters.

The results will be published September 28 in the peer-reviewed journal Nature. Richard Mushotzky, a professor of astronomy at University of Maryland and a co-author of the study, said in a statement:

The unified model has been the prevailing wisdom for years. However, this idea does not fully explain the differences we observe in galaxies’ spectral fingerprints, and many have searched for an additional parameter that fills in the gaps.

Our new analysis of X-ray data from NASA’s Swift Burst Alert Telescope suggests that Type I galaxies are much more efficient at emitting energy.

To conduct the study, Mushotzky and his colleagues re-examined data from 836 active galaxies detected by NASA’s Swift Burst Alert Telescope that strongly emit high-energy, or “hard,” X-rays — the same X-rays that medical technicians use to visualize the human skeleton.

To measure the mass and growth rate of these galaxies’ active nuclei — the supermassive black holes at the galaxies’ centers — the researchers used data from 12 different ground-based telescopes spread across the globe to complement the data from the Swift satellite. Michael Koss, a research scientist at Eureka Scientific, Inc. and a co-author of the paper, said:

This project began in 2009, as part of my doctoral work at UMD, and has radically grown with the help of more than 40 researchers across the globe. When I started out, I spent a month of lonely nights by myself at the Kitt Peak National Observatory observing a few dozen galaxies. I never dreamed we would eventually expand to such a large sample, enabling us to answer many amazing scientific questions for the first time.

The researchers said that – when they compared differences in the X-ray spectra between Type I and Type II galaxies – they found that, regardless of which way the galaxy faces Earth, the central black holes in Type I galaxies consume matter and emit energy much faster compared with the black holes at the center of Type II galaxies. Mushotzky said:

The astronomers commented that, for decades, astronomers have preferentially studied Type II galaxies. That’s largely because the active nuclei of Type I galaxies are very bright, making it difficult to see the stars and gas clouds that constitute the rest of the galaxy and because, after all, the unified model had suggested that all active galaxies were fundamentally the same. Mushotzky said:

But now, because our results suggest that the two types of galaxies are indeed fundamentally different, it is likely that a lot of researchers will re-evaluate their data and take another look at Type I galaxies. By putting us on a path to better understand the differences between the galaxies that host Type I and Type II active nuclei, this work will help us better understand how supermassive black holes influence the evolution of their host galaxies.