Astrophysicists found 12 possible black holes near the supermassive black hole at our Milky Way’s heart. They could be the 1st known members of a black hole swarm. 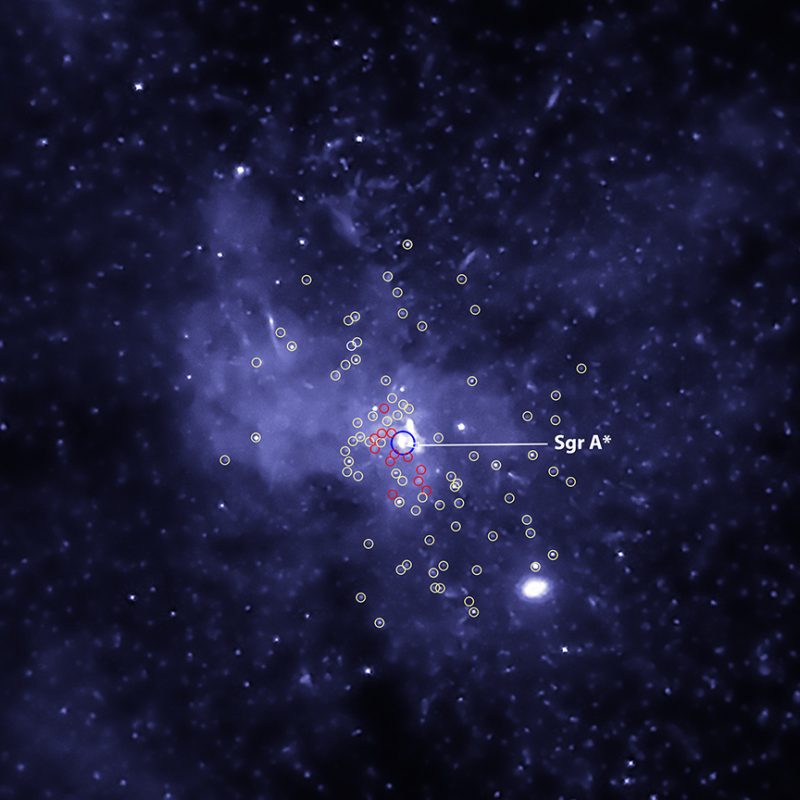 Scientists using X-ray data said on May 9, 2018, that they now have evidence for a swarm of stellar-mass black holes – typically weighing between five to 30 times the mass of our sun – within three light-years of the center of our Milky Way galaxy. The galactic center is already known to be inhabited by a supermassive black hole, with some 4 million times the sun’s mass. Astronomers call this behemoth Sagittarius A* (pronounced Sagittarius A-star), and they’re calling the possible swarm of smaller black holes near it the Sagittarius A* Swarm.

The evidence takes the form of the discovery of just 12 stellar-mass black holes, identified via X-ray data near our galaxy’s center. Chuck Hailey of Columbia University in New York led the team that made the discovery, which was published in April in the peer-reviewed journal Nature. He said in a statement from Columbia:

The scientists said this new evidence is the first confirmation of decades of theoretical studies of the dynamics of stars in galaxies, which have indicated that a large population of stellar mass black holes could drift inward over the eons and collect around the galaxies’ central supermassive black holes.

The researchers used Chandra data to search for X-ray binaries – systems where a black hole is locked in a close orbit with a star and is pulling matter from the star, resulting in X-ray emission – near Sagittarius A*. They studied the X-ray spectra — that is, the amount of X-rays seen at different energies — of sources within about 12 light-years of the galaxy’s heart. A statement from Chandra X-ray Observatory explained:

… they detected 14 X-ray binaries within about three light-years of Sgr A*. Two X-ray sources likely to contain neutron stars based on the detection of characteristic outbursts in previous studies were then eliminated from the analysis.

The dozen remaining X-ray binaries are identified in the labeled version of the image [above] using red colored circles. Other sources with relatively large amounts of high energy X-rays are labeled in white, and are mostly binaries containing white dwarf stars.

Hailey and his collaborators concluded that a majority of these dozen X-ray binaries are likely to contain black holes.

Sagittarius A* is about 26,000 light-years from Earth. The scientists said that – at this distance – only the brightest X-ray binaries containing black holes are likely to be detectable. Therefore, they said:

… the detections in this study imply that a much larger population of fainter, undetected X-ray binaries — at least 300 and up to 1,000 — containing stellar-mass black holes should be present around Sagittarius A*. 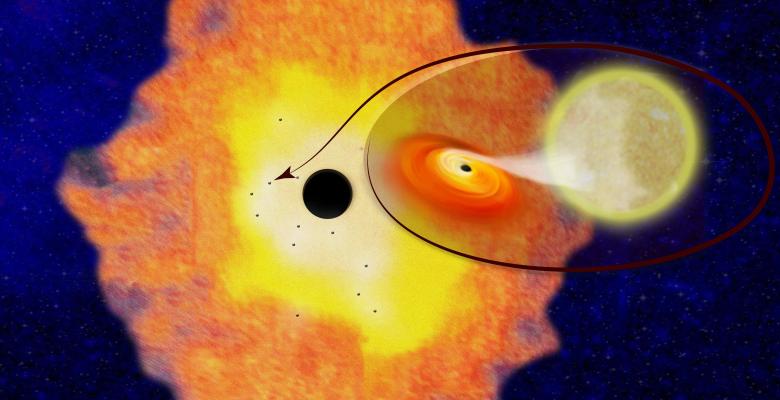 Artist’s concept of the stellar-mass black holes found near the giant supermassive black hole at the center of our Milky Way galaxy, via Columbia University.

Bottom line: Astrophysicists found 12 possible black holes within three light-years of Sagittarius A*, the 4-million-solar-mass black hole at the heart of our Milky Way galaxy. The smaller black holes could be the 1st known members of a black hole swarm.

Source: A density cusp of quiescent X-ray binaries in the central parsec of the Galaxy