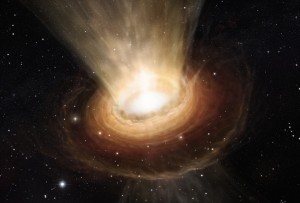 This artist’s impression shows the surroundings of the supermassive black hole at the heart of the active galaxy NGC 3783 in the southern constellation of Centaurus (The Centaur). New observations using the Very Large Telescope Interferometer at ESO’s Paranal Observatory in Chile have revealed not only the torus of hot dust around the black hole but also a wind of cool material in the polar regions.

Thank you! Your submission has been received!
Oops! Something went wrong while submitting the form.
END_OF_DOCUMENT_TOKEN_TO_BE_REPLACED