Since 1975, when Hawking showed that black holes evaporate from our universe, physicists have tried to explain what happens to a black hole’s information. 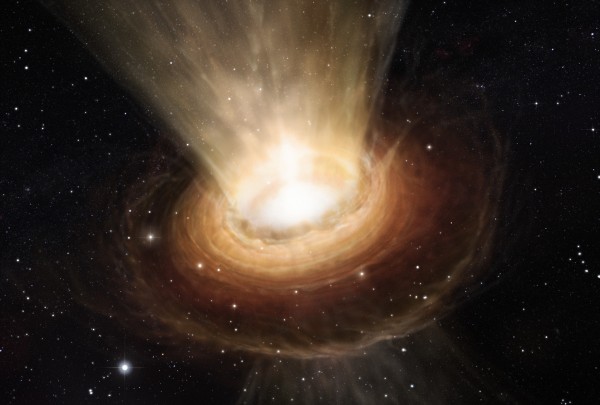 Artist’s impression of a supermassive black hole at the heart of an active galaxy. Image via ESO/M. Kornmesser

What happens to the information that goes into a black hole? Is it irretrievably lost? Does it gradually or suddenly leak out? Is it stored somehow? Physicists have puzzled for decades over what they call the information loss paradox in black holes. A new study by physicists at University at Buffalo – published in March, 2015 in the journal in Physical Review Letters – shows that information going into a black hole is not lost at all.

Instead, these researchers say, it’s possible for an observer standing outside of a black hole to recover information about what lies within.

Dejan Stojkovic, associate professor of physics at the University at Buffalo, did the research with his student Anshul Saini as co-author. Stojkovic said in a statement:

According to our work, information isn’t lost once it enters a black hole.

Stojkovic says his research “marks a significant step” toward solving the information loss paradox, a problem that has plagued physics for almost 40 years, since Stephen Hawking first proposed that black holes could radiate energy and evaporate over time, disappearing from the universe and taking their information with them.

Disappearing information is a problem for physicists because it’s a violation of quantum mechanics, which states that information must be conserved. 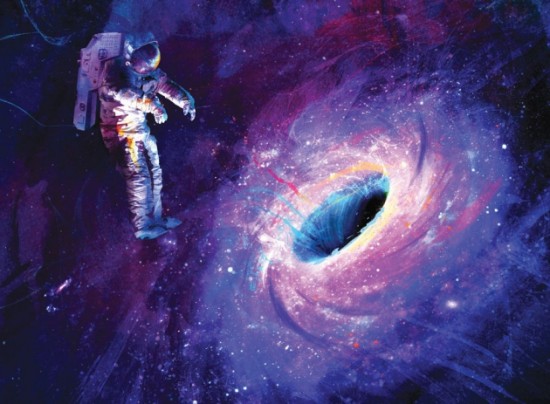 According to modern physics, any information related to an astronaut entering a black hole – for example, height, weight, hair color – may be lost. This notion is known as the ‘information loss paradox’ of black holes because it violates quantum mechanics. Artist’s concept via Nature.

Stojkovic says that physicists – even those who believed information was not lost in black holes – have struggled to show mathematically how the information is preserved. He says his new paper presents explicit calculations demonstrating how it can be preserved. His statement from University at Buffalo explained:

In the 1970s, [Stephen] Hawking proposed that black holes were capable of radiating particles, and that the energy lost through this process would cause the black holes to shrink and eventually disappear. Hawking further concluded that the particles emitted by a black hole would provide no clues about what lay inside, meaning that any information held within a black hole would be completely lost once the entity evaporated.

Though Hawking later said he was wrong and that information could escape from black holes, the subject of whether and how it’s possible to recover information from a black hole has remained a topic of debate.

Stojkovic and Saini’s new paper helps to clarify the story.

Instead of looking only at the particles a black hole emits, the study also takes into account the subtle interactions between the particles. By doing so, the research finds that it is possible for an observer standing outside of a black hole to recover information about what lies within.

These correlations were often ignored in related calculations since they were thought to be small and not capable of making a significant difference.

Our explicit calculations show that though the correlations start off very small, they grow in time and become large enough to change the outcome. 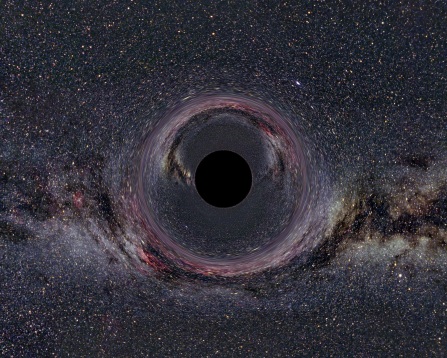 Artist’s impression of a black hole, via Icarus

Bottom line: Since 1975, when Stephen Hawking and Jacob Bekenstein showed that black holes should slowly radiate away energy and ultimately disappear from the universe, physicists have tried to explain what happens to information inside a black hole. Dejan Stojkovic and Anshul Saini, both of University at Buffalo, just published a new study that contains specific calculations showing that information within a black hole is not lost.