Using a computer simulation, astronomers probe the ‘cosmic web’ of the universe, its honeycomb-like structure on the largest scales. 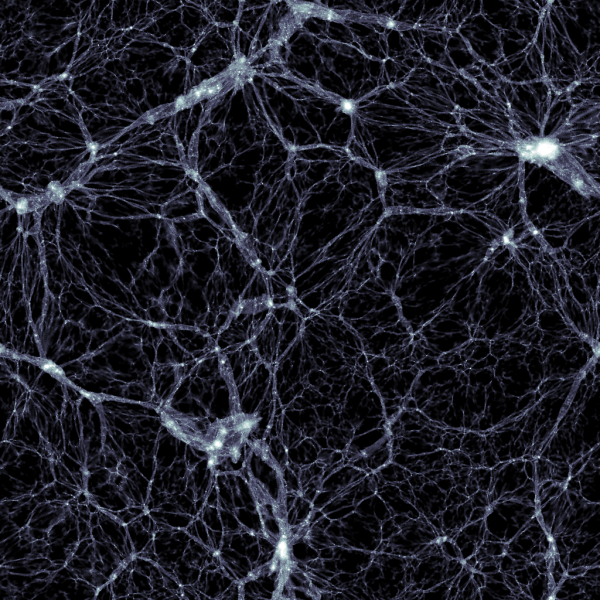 A slab cut from a cube generated by the Illustrious computer simulation of the universe. It shows the distribution of dark matter, with a width and height of 350 million light-years and a thickness of 300,000 light-years. Galaxies are found in the small, white, high-density dots. Image via Markus Haider / Illustrious collaboration.

In recent decades, astronomers have cultivated a picture of the universe dominated by unseen matter, in which – on the largest scales – galaxies and everything they contain are concentrated into honeycomb-like filaments stretching around the edge of enormous voids. Until a recent study, the voids were thought to be almost empty. Now astronomers in Austria, Germany and the United States say these dark areas in space could contain as much as 20% of the ordinary matter of our cosmos. They also say that galaxies make up only 1/500th of the volume of the universe. The team, led by Dr. Markus Haider of the Institute of Astro- and Particle Physics at the University of Innsbruck in Austria, published these results in a new paper in Monthly Notices of the Royal Astronomical Society on February 24, 2016.

Looking at cosmic microwave radiation, modern satellite observatories like COBE, WMAP and Planck have gradually refined our understanding of the composition of the universe, and the most recent measurements suggest it consists of 4.9% ordinary matter (i.e., the matter that makes up stars, planets, gas and dust, and living things), while 26.8% is the mysterious and unseen dark matter, and 68.3% is the even more mysterious dark energy.

Complementing these missions, ground-based observatories have mapped the positions of galaxies and, indirectly, their associated dark matter over large volumes, showing that they are located in filaments that make up a vast cosmic web.

Haider and his team investigated this web in more detail, using data from the Illustris project, a large computer simulation of the evolution and formation of galaxies. Using this computer simulation, they measured the mass and volume of the filaments in space making up the cosmic web, and the galaxies within them. 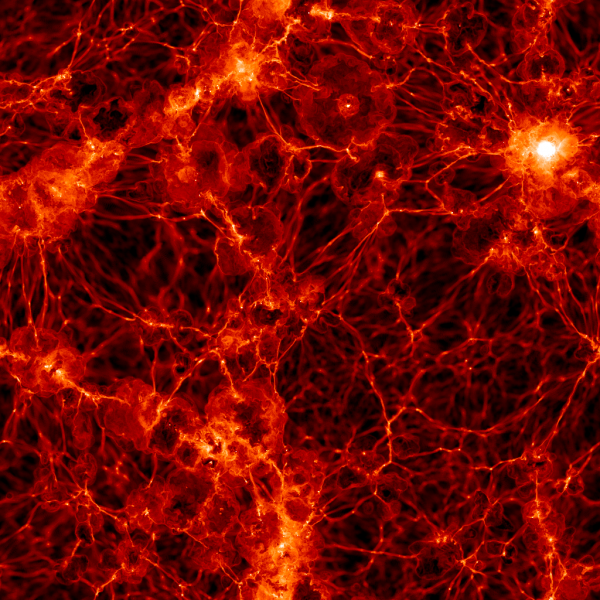 The same slice of data, this time showing the distribution of normal or baryonic matter. Image via Markus Haider / Illustrious collaboration.

The Illustrious project simulates a cube of space in the universe, measuring some 350 million light-years on each side. It starts when the universe was just 12 million years old, a small fraction of its current age, and tracks how gravity and the flow of matter changes the structure of the cosmos up to the present day.

The simulation deals with both normal and dark matter, with the most important effect – in the computer simulation, as in the actual universe – being the gravitational pull of the dark matter.

When the scientists looked at the data, they found that about 50% of the total mass of the universe is in the places where galaxies reside, compressed into a volume of 0.2% of the universe we see, and a further 44% is in the enveloping filaments.

Just 6% is located in the voids, which make up 80% of the volume of space studied.

But Haider’s team also found that a surprising fraction of normal matter — 20% — is likely to have been transported into the voids. The culprit appears to be the supermassive black holes found in the centers of galaxies. Some of the matter falling towards the holes is converted into energy. This energy is delivered to the surrounding gas, and leads to large outflows of matter, which stretch for hundreds of thousands of light-years from the black holes, reaching far beyond the extent of their host galaxies.

Apart from filling the voids with more matter than thought, the result might help explain the missing mass problem, where astronomers do not see the amount of normal matter predicted by their models.

This simulation, one of the most sophisticated ever run, suggests that the black holes at the center of every galaxy are helping to send matter into the loneliest places in the universe. What we want to do now is refine our model, and confirm these initial findings.

Illustris is now running new simulations, and results from these should be available in a few months, with the researchers keen to see whether for example their understanding of black hole output is right. Whatever the outcome, it will be hard to see the matter in the voids, as this is likely to be very tenuous, and too cool to emit the X-rays that would make it detectable by satellites.

Bottom line: Using a computer simulation, astronomers probe the ‘cosmic web’ of the universe, its honeycomb-like structure on the largest scales. Among other things, they find that supermassive black holes in the centers of galaxies may have transported a substantial fraction of the ordinary matter of the universe into the dark voids between filaments in the web.