It’s the first time astronomers have seen a supermassive black hole in action, blowing away its galaxy’s reservoir of star-making gas. 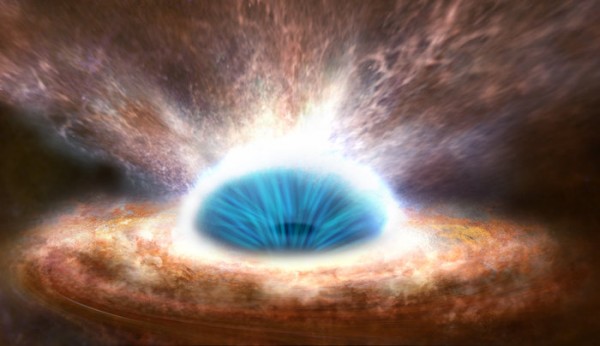 Artist’s concept of black hole winds via ESA. Read more about this image.

One of the great revelations of modern astronomy are the supermassive black holes – millions to billions of times more massive than our sun – found at the hearts of most galaxies. Most, like the black hole at the center of our Milky Way galaxy, are quiet, but some are known to be voraciously devouring nearby stars, gas and dust. In this process, some also produce powerful winds and jets. Astronomers have suspected that black hole winds might be responsible for draining galaxies of the interstellar gas from which new stars are born. Now they have an example of at least one galaxy doing precisely that. Astronomers using the European Space Agency’s Herschel space observatory have found that the winds blowing from a huge black hole are sweeping away its host galaxy’s reservoir of raw star-building material. Francesco Tombesi from NASA’s Goddard Space Flight Center and the University of Maryland, USA, who led the research published March 26, 2015 in Nature, said:

This is the first time that we have seen a supermassive black hole in action, blowing away the galaxy’s reservoir of star-making gas.

The astronomers combined infrared observations from ESA’s Herschel space observatory with new data from the Japanese/US Suzaku X-ray satellite to detect black hole winds from the central black hole of a galaxy known as IRAS F11119+3257. They also learned the winds’ role in pushing star-forming gas in this galaxy outward.

In a statement, these astronomers said:

The winds start small and fast, gusting at about 25% the speed of light near the black hole and blowing away about the equivalent of one solar mass of gas every year.

As they progress outwards, the winds slow but sweep up an additional few hundred solar masses of gas molecules per year and push it out of the galaxy.

This is the first solid proof that black-hole winds are stripping their host galaxies of gas by driving large-scale outflows.

The astronomers say that the winds from black holes in the hearts of galaxies could eventually affect a galaxy’s star-forming activity, slowing it down or possibly quenching it entirely.

ESA has more on this story

We’re halfway through our annual fund-raising campaign. Have you donated yet? Help EarthSky keep going. 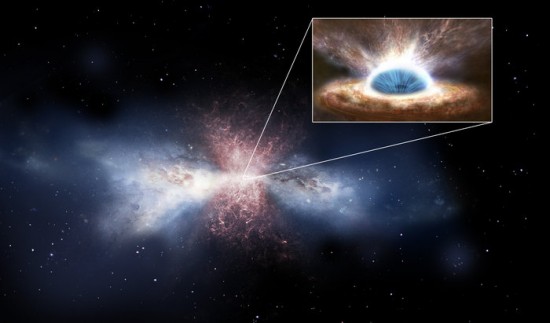 Artist’s concept of a supermassive black hole at the center of a galaxy, causing winds that blow away the materials needed for star formation. Image via ESA.

Bottom line: Astronomers thought that winds from supermassive black holes at the hearts of some galaxies should be capable of blowing away the interstellar gas needed for star formation. Now they have an example of a galaxy – known as IRAS F11119+3257 – doing exactly that.