Scientists used the Blue Waters supercomputer to show that a black hole’s relativistic jets and accretion disk both may be spinning – and precessing over time – around an axis separate from the black hole itself.

The video above shows a first-of-its-kind simulation – produced using the Blue Waters supercomputer – demonstrating that a black hole’s relativistic jets follow along with the precession of a black hole’s tilted accretion disk. These scientists said:

At close to a billion computational cells, it is the highest resolution simulation of an accreting black hole ever achieved.

Relativistic jets – that is, jets containing particles that move near the speed of light – tend to be associated with the central, supermassive black holes of some active galaxies, radio galaxies and quasars. They tend to be located many billions of light-years away and may extend outward from supermassive black holes across millions of light-years of space.

Black hole accretion disks – while akin to earthly hurricanes and while theorized and discussed by scientists for decades – are also highly complex systems. Both the relativistic jets and the accretions disks of black holes are located so far away that it’s impossible to observe many details about them. That’s why scientists use computer simulations to study them.

Nearly all previous simulations assumed accretion disks and jets aligned with the spin of the black hole. But, in reality, most galaxies’ central supermassive black holes are thought to harbor tilted disks — meaning the disk rotates around a separate axis than the black hole itself.

The recent simulations by the Blue Waters supercomputer – located on the campus of the University of Illinois in Champaign-Urbana – are the first to show the jets aligned with the accretion disks and also to show the jets’ streams gradually changing direction in the sky, or precessing. The scientists who ran the simulations said this is:

… a result of space-time being dragged into the rotation of the black hole. This behavior aligns with Albert Einstein’s predictions about extreme gravity near rotating black holes, published in his famous theory of general relativity.

Physicist Alexander Tchekhovskoy at Northwestern is a co-author of the study, which was published in the peer-reviewed journal Monthly Notices of the Royal Astronomical Society. Tchekhovskoy said:

Understanding how rotating black holes drag the space-time around them and how this process affects what we see through the telescopes remains a crucial, difficult-to-crack puzzle. Fortunately, the breakthroughs in code development and leaps in supercomputer architecture are bringing us ever closer to finding the answers.

Read more about these computer simulations via Northwestern University 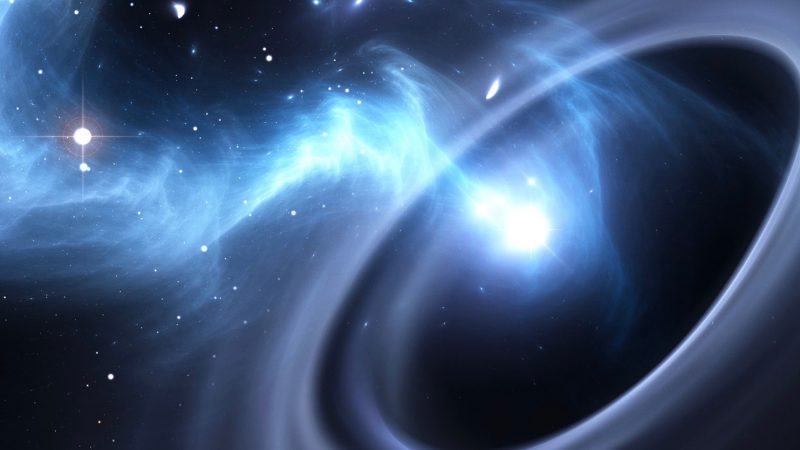 Artist’s concept of a black hole, via Northwestern Now.

Bottom line: Scientists used the Blue Waters supercomputer to show that a black hole’s relativistic jets follow along with the precession of its tilted accretion disk. In other words, both may be spinning around an axis separate from the hole itself.