For the first time, flickering light was seen around a nearby black hole in outburst. It was bright enough to be seen in small telescopes. 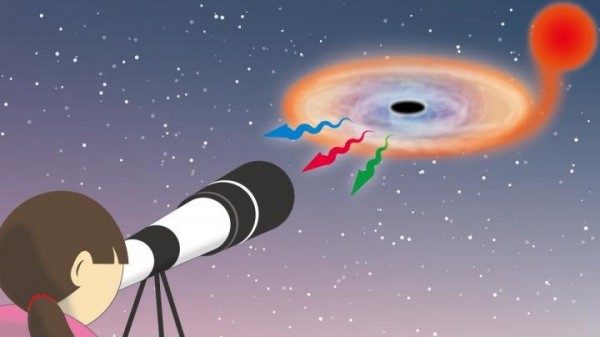 Is it possible to see a black hole? Not the hole itself, but the area around it, yes. That’s according to an international team of scientists who published January 7, 2016 in the journal Nature. These scientists say that sporadic activity of flickering light might sometimes be visible – even in telescopes as small as those used by some amateur astronomers – when observing a nearby black hole.

We now know that we can make observations based on optical rays — visible light, in other words — and that black holes can be observed without high-spec X-ray or gamma-ray telescopes.

The team, which included collaborators from Japan’s space agency JAXA, explained that – once in several decades – some black holes undergo outbursts. The outbursts happen with black hole in orbit with a companion star, and they aren’t from the hole itself, but from a surrounding accretion disk, formed as matter from the companion star flows toward the hole.

As this incoming matter circles around the hole, processes within the disk can emit huge amounts of energy.

V404 Cygni is one of the nearest black holes to Earth. It’s some 7,800 light-years away in the direction to our constellation Cygnus the Swan. It orbits with a companion star slightly less massive than our sun. In June, 2015, satellites detected signs of an outburst from this black hole. Scientists from around the world observed it, but – along with X-ray and gamma ray observations – V404 Cygni also was seen to emit flickering visible light.

This visible light showed repetitive patterns, having timescales of several minutes to a few hours. The optical fluctuation patterns, the team found, were correlated with those of X-rays.

The scientists concluded that the light originates from X-rays emerging from the innermost region of the accretion disk around a black hole. These X-rays irradiate and heat the outer part of the disk, causing it to emit light in the part of the spectrum visible to the human eye.

During the observations of V404 Cygni, the scientists said, the visible light was strong enough that the sporadic activity of flickering light might have been detected with a backyard telescope with a primary mirror of at least 8″ (20 cm) in diameter.

Does that mean you can see a black hole’s flickering light in your telescope?

Although some advanced amateurs know the sky very well, and there are maps or programs that may show the location of various black holes, catching a nearby black hole in outburst – and seeing its dim flickering light – would be a very rare event.

Some computerized telescopes do include black holes in their objects menu. Those targets are supposed to be invisible, but if your ‘scope is correctly aligned, you can point to a black hole in that area of the sky.

Just realize that you will not see the black hole, even though the exact location of some may be included in your telescope computer’s database, and the instrument can slew to a known one.

As for seeing the sporadic flickering light of a black hole in outburst … these outbursts are rare. They happen on a timescale of decades.

So, in theory, yes, it’s possible. But, for small telescopes, the black hole would need to be nearby – as V404 Cygni is – and you’d have to catch it, just as another rare outburst occurs.

Bottom line: The nearby black hole V404 Cygni was observed to emit flickering visible light during an outburst that began in June, 2015.