Astronomers didn’t expect to see a thin disk around the supermassive black hole at the center of galaxy NGC 3147, some 130 million light-years away. They’re using Einstein’s theories of relativity to understand the velocities involved, and the intensity of the black hole’s pull.

Left, a Hubble Space Telescope image of the spiral galaxy NGC 3147, located 130 million light-years away in the direction of the northern constellation Draco. Right, an artist’s illustration of the supermassive black hole residing at the galaxy’s core. This monster black hole weighs about 250 million times the mass of our sun. Yet NGC 3147’s black hole is relatively quiescent, and astronomers did not expect to find a thin disk. Image via NASA (Hubble image: NASA/ESA/S. Bianchi, A. Laor, and M. Chiaberge. Illustration: NASA/ESA/A. Feild /L. Hustak).

Astronomers using the Hubble Space Telescope said earlier this month that they’ve found a thin disk of material that shouldn’t be there, whirling around a supermassive black hole at the heart of a spiral galaxy some 130 million light-years away. The astronomers did not expect to see a disk around the black hole at the center of galaxy NGC 3147. This galaxy was thought to contain a great example of a quiescent supermassive black hole, one that was not “feeding” on massive amounts of material swirling into it from an accompanying disk. Yet, apparently, the disk does exist. It looks like the same sort of disk that – in the case of well-fed black holes in other galaxies – has been seen to produce a brilliant beacon called a quasar. But there’s no quasar here. The central black hole is quiet. And so … a mystery!

Yet the team is excited about this discovery. It gives them a chance to explore the physics of black holes and their disks more thoroughly. Plus, they said, the black hole and its disk offer:

The team’s paper was published July 11, 2019, in the peer-reviewed journal Monthly Notices of the Royal Astronomical Society.

Why didn’t the astronomers expect this black hole disk? Aren’t black holes typically surrounded by disks like this one? Not exactly. Central supermassive black holes in galaxies like NGC 3147 appear to astronomers as “malnourished.” That’s thought to be because there’s not enough gravitationally captured material to feed them regularly. NASA explained:

So, the thin haze of infalling material puffs up like a donut rather than flattening out in a pancake-shaped disk. Therefore, it is very puzzling why there is a thin disk encircling a starving black hole in NGC 3147 that mimics much more powerful disks found in extremely active galaxies with engorged, monster black holes.

The astronomers initially selected this galaxy to validate accepted models explaining galaxies like NGC 3147, those with black holes on a meager diet of material. One of the astronomers involved in the study – Ari Laor of the Technion-Israel Institute of Technology located in Haifa, Israel – commented in a statement:

We thought this was the best candidate to confirm that below certain luminosities, the accretion disk doesn’t exist anymore. What we saw was something completely unexpected. We found gas in motion producing features we can explain only as being produced by material rotating in a thin disk very close to the black hole. 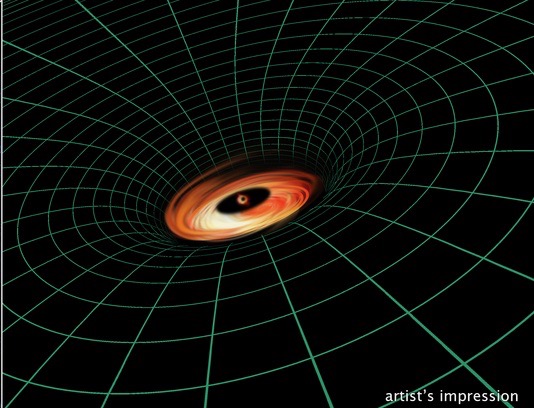 These astronomers said this galaxy, its black hole and its mysterious disk are giving them an opportunity to use Einstein’s theories of relativity to explore the dynamic processes close to a black hole. The black hole’s mass is thought to be around 250 million suns; that’s in contrast to 4 million suns for the quiescent central black hole at the center of our own Milky Way galaxy. Bianchi said:

This is an intriguing peek at a disk very close to a black hole, so close that the velocities and the intensity of the gravitational pull are affecting how the photons of light look. We cannot understand the data unless we include the theories of relativity.

The black hole is embedded deep within its gravitational field, shown by the green grid that illustrates warped space. The gravitational field is so strong that light is struggling to climb out, a principle described in Einstein’s theory of general relativity. Material also is whipping so fast around the black hole that it brightens as it approaches Earth on one side of the disk and gets fainter as it moves away. This effect, called relativistic beaming, was predicted by Einstein’s theory of special relativity.

We’ve never seen the effects of both general and special relativity in visible light with this much clarity.

Bottom line: Astronomers did not expect to see a thin disk around the supermassive black hole at the center of galaxy NGC 3147. They said the discovery helps them probe the physics of black holes and their disks. The velocities involved, and the intensity of the gravitational pull of the hole itself, require Einstein’s theories of relativity to understand what is happening in this distant system, 130 million light-years away.