Sneaking a peek inside a black hole’s disk

Amazing new image – obtained via an orbiting X-ray observatory – shows the disk of gas and dust surrounding a supermassive black hole to be clumpy, not smooth. 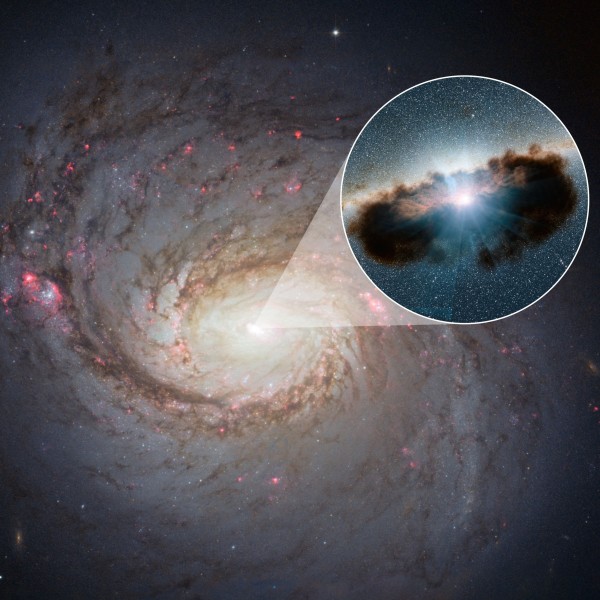 Spiral galaxy Messier 77, aka NGC 1068, located about 45 million light-years away. The Hubble Space Telescope captured this image of the whole galaxy, and NuSTAR’s high-energy X-rays eyes studied the disk around the galaxy’s central supermassive black hole (shown here as an artist’s concept, in the zoomed-in inset). This active black hole is surrounded by extremely thick clouds of gas and dust. The NuSTAR data revealed that the torus of gas and dust surrounding the black hole, also referred to as a doughnut, is more clumpy than previously thought. Read more about this image.

In the view of modern astronomers, a supermassive black hole at the center of a distant galaxy is likely encircled by thick, doughnut-shaped disk or torus of gas and dust. The material in these tori is what feeds an active black hole, that is, one that’s still growing.

Here’s a peek inside one of the densest known of these tori, surrounding the black hole at the center of a well-studied spiral galaxy called NGC 1068 (aka M77), located some 47 million light-years away in the direction to the constellation Cetus the Whale. The telescope that acquired the data to create this artist’s concept is called NuSTAR (NASA’s Nuclear Spectroscopic Telescope Array), and it used its X-ray vision to peer inside the disk.

It has confirmed that the material in the disk isn’t smooth, but rather clumpy.

Andrea Marinucci of the Roma Tre University in Italy is lead author of the paper describing this new research, published in the Monthly Notices of the Royal Astronomical Society. In addition to data from NuSTAR, the team used data from the European Space Agency’s XMM-Newton space observatory. Marinucci said:

Originally, we thought that some black holes were hidden behind walls or screens of material that could not be seen through …

The rotating material is not a simple, rounded doughnut as originally thought, but clumpy.

In the past decade, astronomers have been finding hints that these doughnuts aren’t as smoothly shaped as once thought. They are more like defective, lumpy doughnuts that a doughnut shop might throw away.

The new discovery is the first time this clumpiness has been observed in an ultra-thick doughnut, and supports the idea that this phenomenon may be common. The research is important for understanding the growth and evolution of massive black holes and their host galaxies.

Both NuSTAR and XMM-Newton observed the supermassive black hole in NGC 1068 simultaneously on two occasions between 2014 to 2015. On one of those occasions, in August 2014, NuSTAR observed a spike in brightness. NuSTAR observes X-rays in a higher-energy range than XMM-Newton, and, NASA said, those high-energy X-rays can uniquely pierce thick clouds around the black hole.

The scientists say the spike in high-energy X-rays was due to a clearing in the thickness of the material entombing the supermassive black hole. Marinucci commented:

It’s like a cloudy day, when the clouds partially move away from the sun to let more light shine through.

Read more about this new research from NASA 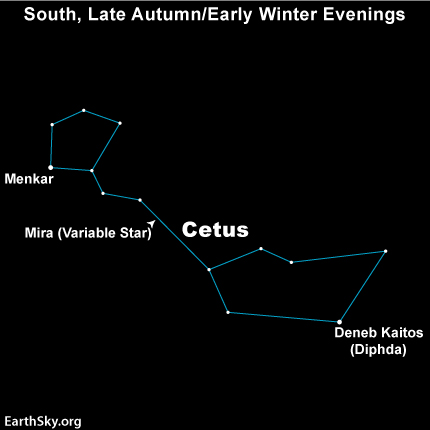 The constellation Cetus the Whale. The image at the top of this post lies hidden in this part of the sky, southward as seen in the evening, in late fall and early winter in the Northern Hemisphere.

Bottom line: New research on the disk or torus around the supermassive black hole at the center of Messier 77, aka NGC 1068, a distant spiral galaxy. The image on this page is an artist’s concept. It was created using results from NuSTAR’s space observatory, and it shows that black hole disks aren’t smooth. Instead, they’re clumpy.