Astronomers have discovered 10 free-floating, Jupiter-sized planets in our galaxy and say these objects might be more common than stars.

Astronomers have discovered a new class of free-floating, Jupiter-sized planets. These planets orbit the center of our Milky Way galaxy, just as our sun does, but – unlike our Earth – do not appear to be bound to a parent star. It’s possible they were kicked out of their star’s system during an early stage of formation. Astronomers are saying these free-floating planets might outnumber stars two to one.

Astronomers had predicted the existence of these free-floating or unbound planets – also sometimes called orphan planets – but none had been found until this discovery. Mario Perez, an exoplanet program scientist at NASA Headquarters in Washington. In a press release about the discovery, Perez said:

Although free-floating planets have been predicted, they finally have been detected. [This has] major implications for models of planetary formation and evolution.

Astronomers have discovered more than 500 exoplanets since 1995. They’ve also found evidence of massive planetary objects – called brown dwarfs – three to 15 Jupiter masses, in star-forming regions. Scientists believe brown dwarfs form more like stars than planets, but without enough mass to start the nuclear process and shine for the same reason stars do – because of thermonuclear reactions deep in their interiors. 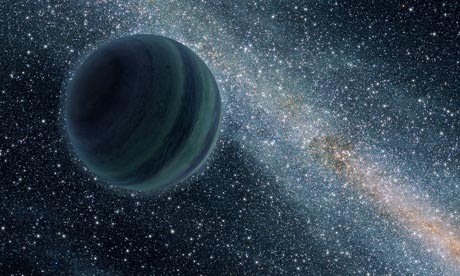 Rogue Jupiters might outnumber stars in our MIlky Way galaxy by two to one.

The new discovery – announced in the May 19, 2011 issue of the journal Nature, are much less massive than brown dwarfs. Astronomers say they are a new population of unbound planets. The 10 unbound planets discovered so far are roughly the mass of Jupiter. Scientists don’t rule out that these planets might be connected to a host star; it’s possible they are more than 10 times farther from their star than Earth is from our sun. Meanwhile, other studies suggest such a large distance between a Jupiter-sized planet and its star would not be expected, so such cases would be rare. As an alternative scenario to explain the 10 newly found unbound planets, scientists suggest they might have been pushed out of their solar systems during an early stage of formation due to close gravitational encounters with other planets or stars. David Bennett – a NASA and National Science Foundation-funded co-author of the study from the University of Notre Dame in South Bend, Indiana – said:

If free-floating planets formed like stars, then we would have expected to see only one or two of them in our survey instead of 10. Our results suggest that planetary systems often become unstable, with planets being kicked out from their places of birth.

Scientists from Japan and New Zealand, led by Takahiro Sumi from Osaka University, worked together on this discovery throughout 2006 and 2007. One group used a 5.9-foot (1.8-meter) telescope at Mount John University Observatory in New Zealand. The other used a 4.2-foot (1.3-meter) telescope in Chile, scanned an area at the center of our Milky Way galaxy. They were looking for gravitational microlensing events.

During a gravitational microlensing event an object, such as a planet or star, passes in front of a more distant star. The foreground object’s gravity bends the light from the more distant star causing it to magnify and brighten: the lower the mass of the foreground object, the lower the duration of the peak of magnification. Gravitational microlensing is potentially sensitive enough to detect Earth-size objects.

The discovery of these 10 free-floating planets opens up an exciting discussion on what happens during solar system formation and what exactly is a planet. Joachim Wambsganss, University Heidelberg, Germany, writes in a commentary in the journal Nature:

The implications of this discovery are profound. We have a first glimpse of a new population of planetary-mass objects in our galaxy. Now we need to explore their properties, distribution, dynamic states and history.

More information is sure to come regarding these free-floating, Jupiter-sized planets. Are they really free of a host planet or just far from their host star? How many of these planets are out there? As many as stars? Twice as many as stars? Are any free-floating planets Earth-sized? Stay tuned.